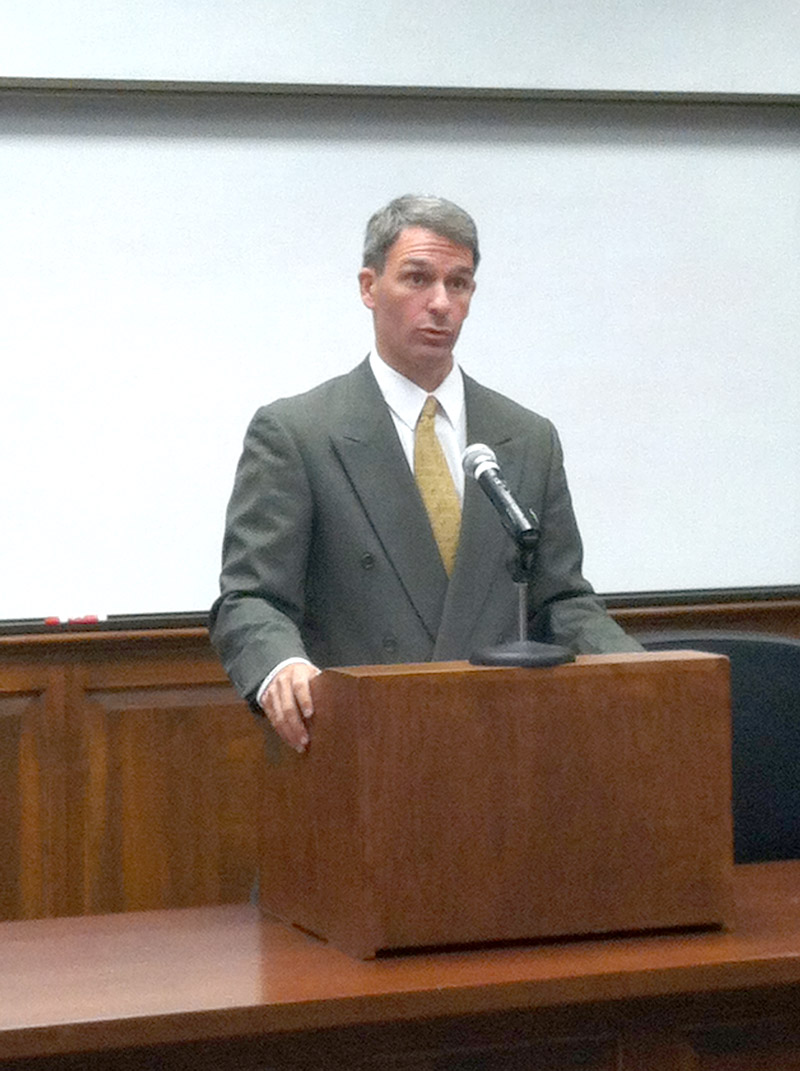 Virginia Attorney General Ken Cuccinelli painted a picture of a federal government overstepping its boundaries in regard to states’ rights in his speech Thursday afternoon at the Marshall-Wythe School of Law.

“The main interest from an attorney general’s perspective is observing the rule of law and making sure the federal government stays within its boundaries,” Cuccinelli said.

During his speech, Cuccinelli focused on what he views as the unconstitutional nature of the Affordable Care Act and the legal backlash from many states against the government mandate requiring all citizens to have health insurance.

“It is federalism in action … It hasn’t been exercised a whole lot in the last hundred years or so, though it has always been here and there, rarely on things as substantial as the federal health care bill,” Cuccinelli said. “That is the only instance I am aware of in American history where over half of the states were plaintiffs against the federal government to protect the U.S. Constitution,” Cuccinelli said.

Cuccinelli’s main concern is the future implications of the federal mandate due to its power to require that all Americans buy a product — health insurance — for the public good.

“It is concerning to me that four justices thought that a majority of the Congress and the Senate can order you to buy whatever they want you to buy,” Cuccinelli said.  “They had an interest in the automobile industry as well and could have ordered us all to buy a car every three years, and the price would have been very similar.”

According to Cuccinelli, the health care bill originally required states to expand their Medicaid budgets to cover more people or the federal government would pull all of its funding for Medicaid. In Virginia, half of the Medicaid budget comes from the government.

“To many of our surprise, it was found unconstitutionally coercive of states by a vote of 7-2,” he said.

The crowd was made up of law students, professors, and undergraduates, including French exchange student Victor Granier ’15, who agreed with Cuccinelli’s argument about the U.S. federalist system.

“I think his argument was pretty persuasive.  I definitely understand that you cannot force people to take health care.  That’s not what federal government aims at, forcing people to buy something,” Granier said.

Some students took issue with Cuccinelli’s approach to attacking the health care law through the legal system.

“I have my position on that, which is that the remedy is political; if you don’t like federal overreach, vote in senators who won’t do it, and he has his opinion,” Danny Muchoki J.D. ’13 said.