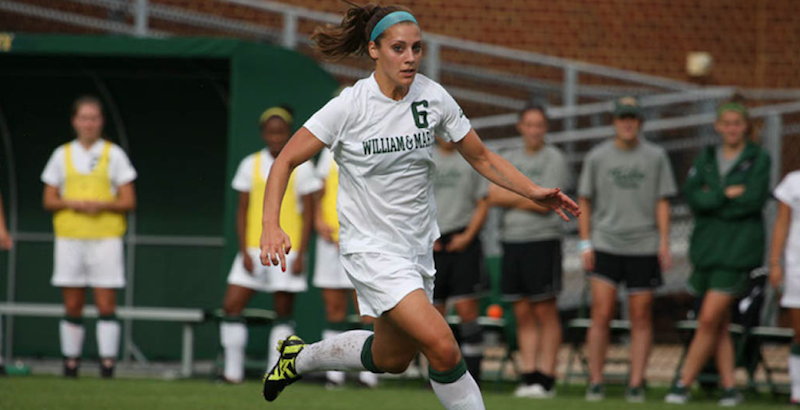 For most of the William and Mary women’s soccer players, it was another contest, another game, a chance to reel off a sixth consecutive win. For Davidson, it was a chance to get a positive result while on the road and against an NCAA qualifying team.

For others though, it was a chance to reunite with former teammates.

“It’s always interesting playing against people you were once teammates with – I certainly like having them on my team better than playing against them,” said Davidson’s Becca Fisher.

Fisher, along with William and Mary’s Erin Liberatore and Cortlyn Bristol, all played for the FASA Impact this summer, a W-League team competing in the United Soccer League.

USL’s W-League provides collegiate players a chance to play in a competitive environment during the offseason, as well as offering a top-tier league for alumni and older athletes.

In fact, William and Mary legend Missy Wycinsky-Pruden ‘00 captained the FASA Impact, and was in attendance.

“It’s fun! We’ve kept in touch and kept an eye on them and figured this would be a good one to come down to”, Wycinsky said. “It worked out with our schedules, and it’s a lot of fun to come down and see them compete with each other.”

Wycinsky leads William and Mary’s women’s program in starts (92), assists (52), and ranks second in goals scored (75). For Wycinsky, the advantages of playing in a summer league are obvious.

“There are some standout players on the field, and Erin Liberatore is one of them, Cortlyn Bristol is one of them, and Becca Fisher for Davidson is another. It’s invaluable,” Wycinsky said. “There seems like there’s a little more time here, and so if you’ve been playing at a faster speed over the summer you give yourself a little more time and you can be dangerous and have a greater impact.”

Fisher agrees, and points out how the additional minutes on the field helps keep players sharp.

“It certainly helps to keep my level of play up. It’s always good to get a touch on the ball, no matter what that is. It keeps your competitive drive going – over the summer you don’t want to get burned out just working out by yourself”, Fisher said.

For the Tribe, LIberatore and Bristol appeared sharp in the team’s 3-0 victory over Davidson.

“They both did a great job. Erin [Liberatore] was explosive outside, and Cortlyn [Bristol] did a really good job in the middle,” Fisher said.

While playing for the W-League helps keep players sharp, Fisher sees a difference with team chemistry.

“You can definitely tell they’re in their element [with the Tribe]. They work really well together as a team, and it’s just so different than from over the summer. It’s just a bunch of people, a really eclectic group and here, they’re really a well-oiled machine,” Fisher said.

Until next summer rolls around, though, Fisher, Liberatore, and Bristol will all focus on making the most of their collegiate seasons.