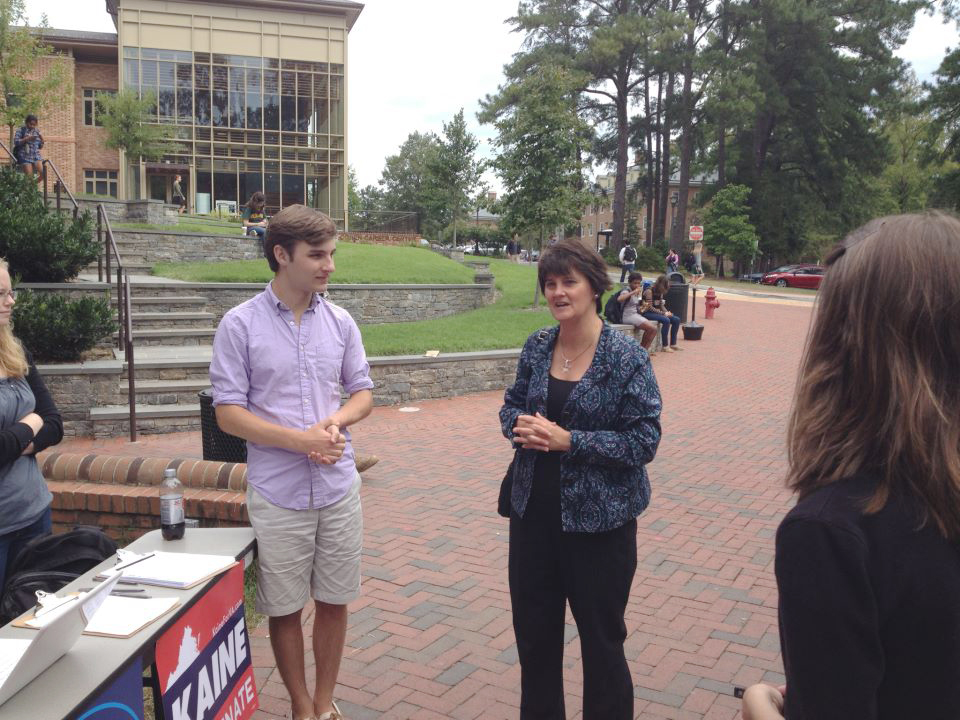 Holton thanked the group for its work in registering students to vote in the swing state of Virginia. She emphasized that these local-level efforts were key to the campaign’s success in one of the nation’s most closely watched congressional races.

“We are fundamentally a purple state, and that’s a good thing in many ways, among others that we get attention from all the nationals. But it does mean we do get the $10 million in negative ads as part of the attention too, so it means that what you all are doing to register folks and get people out to vote is really important,” Holton said to the assembled students.

William and Mary Young Democrats President Zach Woodward ’14 said that over 1,000 students had registered to vote in Williamsburg since the start of the semester.

Before visiting the voter registration drive, Holton was on campus to promote Kaine’s education-reform proposals at the College of William and Mary School of Education.

Allen is running for the seat he held until 2006, when he lost to now-retiring Sen. Jim Webb, D-Va., by less than half a percentage point. Webb’s victory became the final seat Democrats needed to clinch a Senate majority.

A Washington Post poll released Wednesday found that Kaine led by 8 points over Allen, 51 percent to 43 percent. It marked the first time that Kaine had opened a lead in the Post’s polling of the Virginia Senate contest. Until then, the previous two Post polls had showed the race in a statistical tie.

Holton said that higher turnout among young voters could help vault Kaine and other Democrats to victory in November.

“Young people historically haven’t participated as [much as] the rest of the eligible population. Anything we can do to increase that, it absolutely makes a difference,” Holton said. “Young people have a longer perspective, they’re thinking about the future. I think when they think about those issues, they’ll vote Democratic.”

But Holton also noted that increasing voter participation among students was the most important part of voter registration efforts, even above choosing a particular candidate.