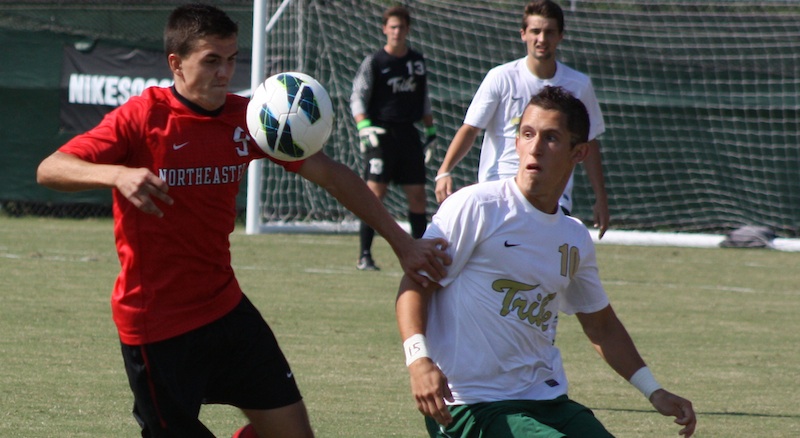 William and Mary drew with visiting Northeastern Saturday afternoon after conceding a goal with just seconds left in regulation in the Tribe’s first conference game of the year. A scoreless overtime cemented the 1-1 tie and left the College looking dejected after a game they thought they had already won.

Sophomore defender Michael Teiman headed in the only goal of the first half in the 20th minute to give the Tribe an advantage it wouldn’t relinquish until the final seconds of play. With the game whittling down to a close and the decision tenuously in the hands of the College, Northeastern scored an unlikely equalizer on a header goal from Simon Cox in the 90th minute.

Saturday’s game also marked the return of junior defender Andrew Hinnant, who stepped back into his role as right back after an injury sidelined him for the first month of the season, moving sophomore Marcus Luster up into a midfield position.

The Tribe played in its standard 4-3-3 formation, which effectively snuffed out most of Northeastern’s scoring chances and created its own scoring opportunities on the counter-attack as the College outshot Northeastern 7-5 in the first frame.

“It was tough, they had some pace up top,” Teiman said. “We were tired, it was a hot day so there were a lot of tired bodies out there. But I think we were able to pull it through in the back for the most part.”

One counter-attack in the 20th minute led to a corner kick for senior midfielder Ben Anderson, which Teiman coolly converted into the soaring header goal. The goal was further evidence of the Tribe’s quality on set pieces this year.

“It’s something that we work on pretty much daily in practice so it’s a really strong point of our team,” Anderson said. “We’ve got a couple guys in the back who really know how to win balls in the air and we try to use that in games. This year, it’s gone really well for us, that was our third goal off set pieces so far.”

The Tribe maintained its lead up until the final seconds of regulation when, in a moment of confusion, a College defender knocked the ball out of play, stopping the clock with just four seconds left. The Northeastern coach successfully argued for three extra seconds to mark the actual time when the ball went out of bounds.

With seven seconds left, the Tribe defense was caught off guard as a Northeastern player lobbed the ball into the frame where it found Cox’s head and was redirected past goalkeeper Bennett Jones into the back of the net.

“We didn’t do a good enough job holding possession at the end of the game, which allowed them to get forward on us,” head coach Chris Norris said. “Then we committed a foul which we didn’t need too really and, on top of that, we compounded it by kicking the ball away which stopped the clock. If the clock doesn’t stop they probably don’t have an opportunity to get the goal. Unfortunately they did, and they were able to make the most of it.”

After the disheartening goal, the College came out in overtime with a sense of urgency and a renewed will to win. Although the team only registered one shot in overtime, the College kept Northeastern from enjoying any real scoring chances. With both teams tiring, the game ended in a 1-1 draw.

“To respond and battle and compete the way we did in overtime, I have a lot of respect for how we did it,” Norris said. “If you were to ask me before the game how I would feel about a draw with a good Northeastern team, I would have said ‘yeah that’s alright.’ Of course, the manner of it puts a bad taste in our mouth, but we still played well.”

The Tribe heads on the road to play High Point Tuesday.