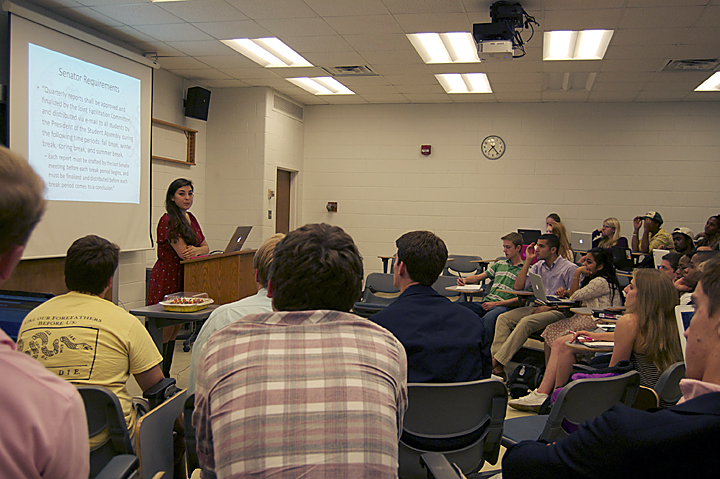 The politics of the country at large played into the politics of the College of William and Mary last Tuesday when the Student Assembly kicked off its senate meeting with a video parodying a presidential candidate.

Homecoming grants were given to Sigma Phi Epsilon, Sigma Pi, Pi Beta Phi, Kappa Alpha, and Alpha Epsilon Pi for festivities, including a carnival in the Sunken Garden, a campus-wide costume party Oct. 24, “Tribal Beats” Oct. 25 and “Illumination” Oct. 26. “Tribal Beats” and “Illumination” will both feature a DJ in the Sunken Garden. The grants totaled $10,126.

“I am very glad the Student Assembly has had this opportunity to work closely with campus organizations to plan events that will really enhance the homecoming experience,” Senate Chair Kendall Lorenzen ’15 said in an email.

“This will protect the community of trust we all hold so dear while ensuring fairness so that every student is treated fairly in the system,” Kim said. “This year, the Honor System Advisory Committee will be charged with implementing and codifying several proposals of the Honor System Review Committee.”

The SA also proposed allocating $40,000 for a concert during I AM W&M diversity week.

“The Student Assembly has a great opportunity to expand the scope of I AM W&M week on campus. I AM W&M week has been a successful initiative for years that students have thoroughly enjoyed,” the SA bill states.

The finance, outreach, student life and executive committees will review the proposal.

Additionally, the outreach committee is looking for ways to ensure that students’ voices are represented through the SA, perhaps through the institution of public surveys. The “What else can the SA do for you?” campaign was launched officially last Thursday.

SA Vice President Melanie Levine ’13 also discussed the possibility of a Spooktacular event, which would involve College students as well as Williamsburg families, and which would provide an afternoon of service opportunities for SA members.

The outreach committee discussed the possibility of the SA working with the Berkeley Middle School student government.