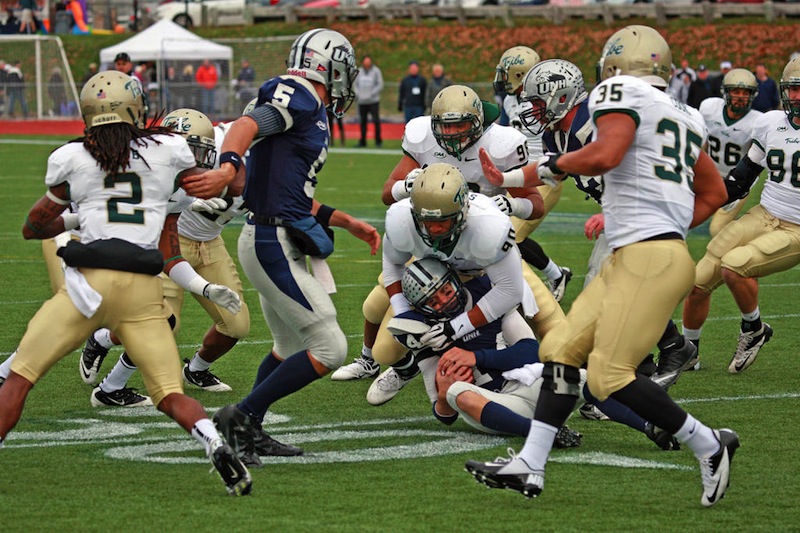 William and Mary dropped its third straight Saturday, succumbing on the road to No. 11 New Hampshire in a close one, 28-25.

After taking a 25-21 lead with six minutes to play, the Tribe (2-7, 1-5 CAA) conceded a six-play, 84-yard game-winning drive that ended with Wildcats running back Nico Steriti punching it in from 19 yards out to put the Wildcats up by three.

After junior quarterback Michael Graham threw an interception on the College’s ensuing possession, the College’s defense forced a New Hampshire punt that gave the Tribe one last shot starting from its own 28-yard line with 44 seconds remaining. Graham connected with redshirt sophomore receiver Sean Ballard to move the Tribe to midfield, but his next pass fell incomplete as time expired, sealing the win for the Wildcats (8-2, 6-1 CAA).

Junior quarterback Brent Caprio got the start for the College and played effectively, completing all five of his pass attempts for 47 yards and a touchdown pass before getting hurt on a five-yard scramble late in the second quarter. Graham took over and connected on 13 of his 25 throws for 167 yards, one touchdown and one interception. But it was the College’s running game that led the way for the offense. Redshirt freshman Mikal Abdul-Saboor gained 89 yards on 17 carries while redshirt sophomore Keith McBride rushed 17 times for 75 yards.

All told, the College ran for 191 yards but was still outshone by the Wildcats who racked up 428 total yards and 207 on the ground.

The College’s defense opened the game by forcing a turnover when senior cornerback B.W. Webb forced and recovered a fumble at the Tribe’s 28 yard line. Two drives later, the College got on the board first when Caprio found sophomore Tre McBride for a 30-yard touchdown pass. McBride would go on to have another outstanding day, catching four passes for 72 yards and two touchdowns.

New Hampshire responded with a 16-play, 69-yard drive capped by a 23-yard field goal that made the score 7-3 with 13:45 left in the second quarter. After the Tribe’s next drive stalled, the Wildcats and quarterback Sean Goldrich made quick work starting from their eight. Nine plays and 92 yards later, New Hampshire took the lead on an 18-yard Steriti touchdown run. The Wildcats went for two and converted, putting New Hampshire up 11-7. Steriti finished with 107 yards on 19 carries and two touchdowns while Goldrich worked efficiently all day, going 21 of 30 for 215 yards through the air.

After Caprio left, Graham and the Tribe made it into New Hampshire territory before punting again. For the second straight possession, the College’s defense wasn’t up to task, allowing a nine-play touchdown drive that put the Wildcats up 18-7.

A Tribe scoring drive at the start of the second half ended in a field goal from redshirt sophomore John Carpenter to make the score 18-10. After the Wildcats were forced to punt on their next drive, Graham found Tre McBride for a 19-yard touchdown pass. Graham hit McBride again for the two-point conversion, tying the game at 18 before New Hampshire hit a field goal to put the Wildcats up three.

Graham finished the scoring for the Tribe with a 1-yard touchdown run.

The College will stay on the road to face Old Dominion Saturday.