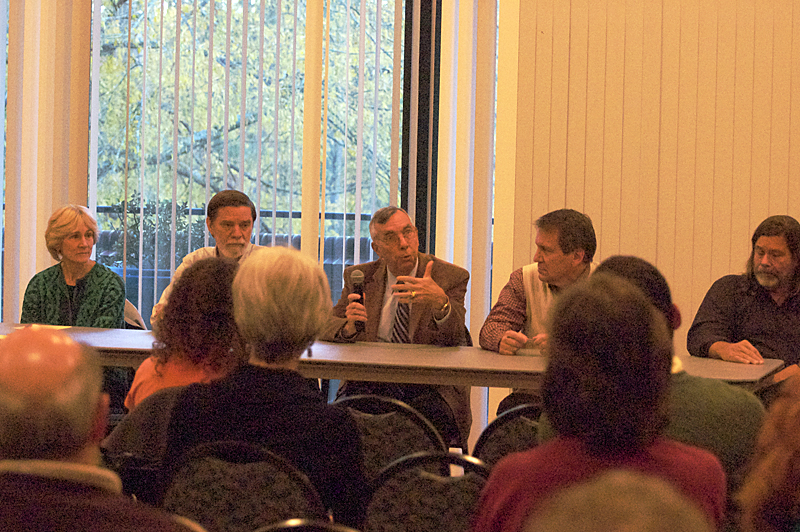 The Due Diligence Committee, charged by President Taylor Reveley to explore the prospect of formal connections between the College of William and Mary and Eastern Virginia Medical School, met Nov. 14 to discuss the overlap of the two institutions. Linking the two schools would add a medical school to the College’s programs. The public forum gave concerned students and community members the opportunity to voice their questions and concerns.

The idea of formally joining with EVMS did not come out of the blue; the College has had close ties to the medical school for some time. Located in Norfolk, the school is only about a one-hour drive located from the College. In fact, a few members of the audience were EVMS students who had earned their undergraduate degrees at the College.

Although the addition of a medical school to the College is appealing to some, the committee feels there are many important factors to consider.

“There’s a lot to know. This is a big, strategic decision that we face,” Vice President for Strategic Initiatives and committee member Jim Golden said. “It’s complicated. We want to continue to explore possibilities.”

One of the biggest concerns raised by the audience and committee members alike was how to fund an emerging medical school. Although it would not be as expensive as schools like Virginia Tech that started their own medical programs from scratch merging the two would require quite an expenditure.

“Those schools [who built their own medical schools] are knee-deep in red ink,” professor of kinesiology and health sciences and committee member Michael Deschenes said. “Maybe we could come up with our own model.”

The College and EVMS would need to look to the state to fund this merger, since neither institution is willing to allot a large financial sum to the merger. In order to receive a grant from the state, the proposal for a medical school must by approved by the College, the College Board of Visitors, EVMS and the General Assembly.

The state has been ambivalent about the merger thus far.

Another major question raised at the forum was whether the implementation of a medical school would detract from the liberal arts core of the College. Deschenes brought up the argument that the College’s association with EVMS may change the way people view the school as a whole.

“‘William and Mary’ is a brand name, and [EVMS] is well aware of [it],” Deschenes said.

Halleran expressed his belief that the integration would neither enhance nor disparage either of the two entities. However, the wide variety of opinions regarding the merger leads to more ambivalence about the deal.

“I don’t think it inherently is a plus or a minus. Alumni have been mixed. [It] depends on what we do with it,” Halleran said.

The Due Diligence Committees for the College and EVMS are still weighing the effects of joining the two programs. However, students pining for a medical school for the College should not hold their breath. Many important factors still have to be negotiated and decided upon.

“My guess, is at this point, we will not have a merger,” Halleran said, voicing in his personal opinion, not that of the committee.