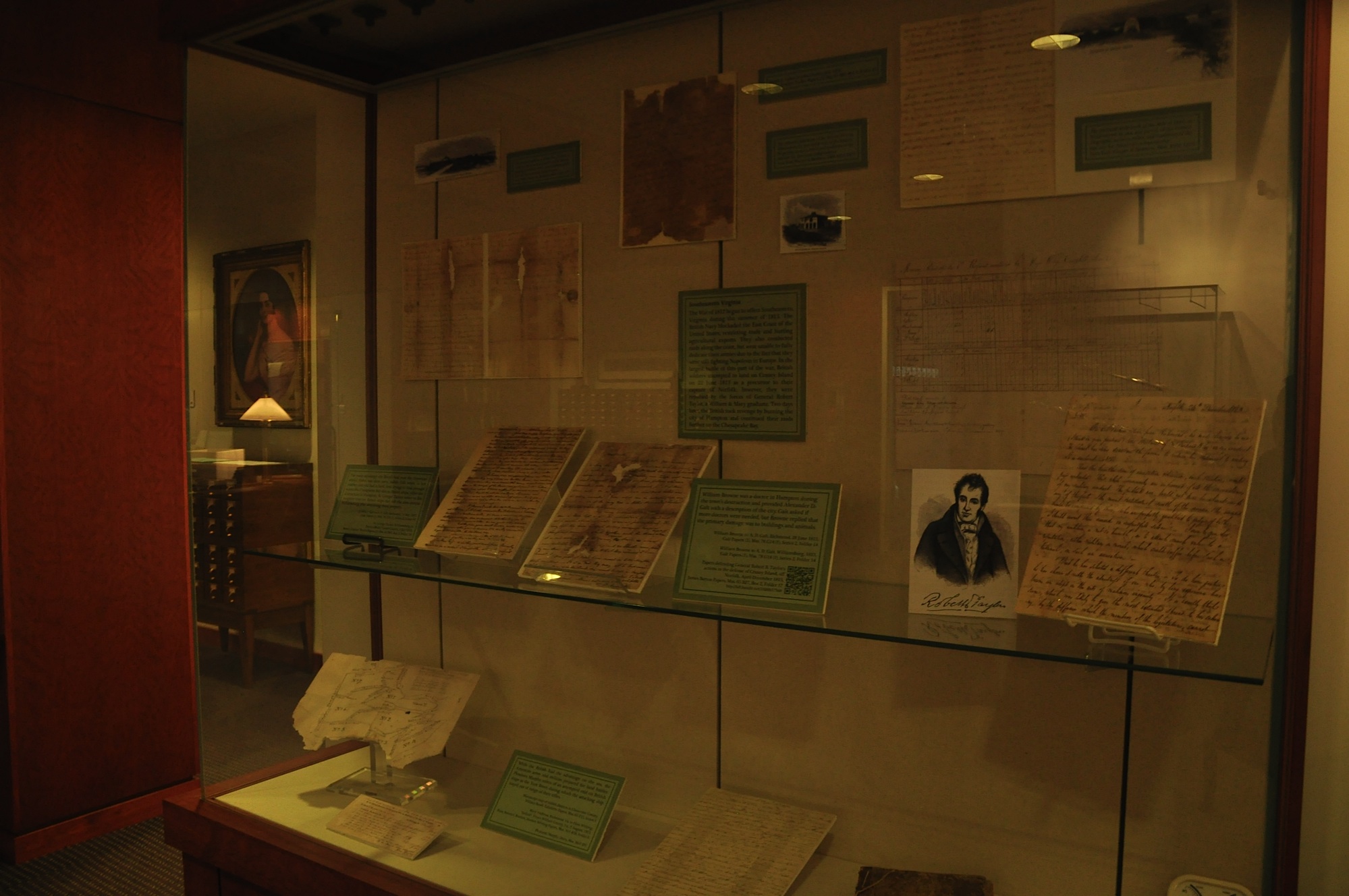 On May 24, 1813, Judith P. Galt wrote a letter to her brother. She told him about the weddings and deaths of some of her acquaintances, the healing of a friend and a neighbor’s travel plans. She also related the tale of her attempt to get across the Chesapeake Bay. Due to the war, British ships were too close, and no one would take her. She was furious and deemed the reluctant men cowards.

Galt’s letter, as well as other personal stories from the War of 1812 have recently been put on display in “The Enemy Has Disappeared From Our Waters: The War of 1812 in Southeastern Virginia,” an exhibit commemorating the war’s 200th anniversary. It will run until April 12 and is located in the lobby of the Special Collections Research Center at Earl Gregg Swem Library.

“Creating an exhibit is not a quick or an easy task,” Ben Bromley, former Public Services Archives specialist of Special Collections and the curator for the War of 1812 exhibit, said.

Planning for this particular exhibit began in September 2012, and, like all Special Collections exhibits, it involved the entire department. Bromley conducted background research, created an argument for the exhibit, chose items for the displays, and worked with Burger Archives Specialist Jennie Davy on the exhibit layout.

“We want to try to find a variety of items [and to] make it visually attractive too,” Davy said.

While some artifacts are originals, mostly from 1813 and 1814, others had to be reproduced since they cannot withstand the stress of extended display. Graphic design is also involved in creating the exhibit, and Ute Schechter, the Warren E. Burger Archivist in Special Collections, served as editor for the text.

The exhibit focuses on the effects of the War of 1812 on the United States as a whole, paying particular attention to the people and commerce of the Williamsburg area. Most of the artifacts for such exhibits — which in this case include letters, engravings, portraits and even an infantry order book — come from Swem, and students can continue to see the originals once they are removed from display and returned to the stacks.

“[The] documents primarily come from the papers of various prominent families from Southeastern Virginia, although some of the images come from our collection of Rare Books,” Bromley said.

Both off and on display, artifacts must be treated carefully. Although they are sent to a specialist with a chemistry background for repair and conservation, Special Collections helps with preservation by controlling the light, temperature and humidity levels within the display cases. Davy explained the many precautions that Special Collections takes to keep all of the artifacts as safe as possible.

“This is one of the reasons why we have rotating exhibits,” she said. “So that things aren’t on display for years at a time, because in that case the light damage [can] affect them.”

Special Collections tries to limit displays to a six-month period, and a cloth is placed over the cases at night in an attempt to further minimize light damage.

“We want to be able to show things, and we want people to see things, but it’s risk management,” Davy said.

However, there are rewards as well as risks. Putting items on display helps bring historical events to the public’s attention. Tami Back, the Associate Director of Communications in Swem’s Special Collections Department, explained that this particular exhibit reveals the individual details of history and the impact of the War of 1812 on the local population. Back, who is from Hampton, Va. was especially fascinated by the letters and artifacts found in Special Collections that mention the city’s burning.

“It was interesting to see that come up here and that the College had original letters that discussed [the burning],” she said. “It’s a huge part of the history of the whole area.”

Davy also emphasized that reading diaries, letters and other individual stories is incredibly important for understanding the history of our country.

“When you read history textbooks in school, you might get the really important, big-named people in the area,” Davy said. “But when you get individual people talking about their experiences, you get [the] personalities and individual history that maybe we don’t get in our general discourse of history.”