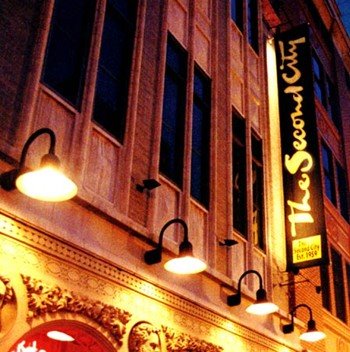 The actors on stage paused in the middle of a sketch and looked at the audience.

“We need someone to walk in,” one said.

Immediately the audience shouted out suggestions, but one name was heard over the rest.

The students who filled the sold-out theater at Phi Beta Kappa Memorial Hall Saturday, Feb. 2, erupted into laughter. The two Second City actors on stage hesitated, obviously unfamiliar with the individual whom the students at the College of William and Mary knew so well.

The pause did not last long, however, because the actress waiting to enter the scene jumped in, waving her arms and bouncing from leg to leg. The students howled with laughter, the scene went dark and the actors proceeded into their next sketch.

“The Second City: Laughing Matters,” a comedy group brought to the College by AMP, consists of five actors who tour the country as part of the larger comedy company. The Second City was founded in 1959 and is based in Chicago, IL. It boasts an impressive list of alumni, including Stephen Colbert, Steve Carrell, Chris Farley and Tina Fey.

Claire Favret ’14 looks up at Fey’s “Rules of Improv” as she walks through The Second City’s Chicago training center, on her way to class.

Favret and Colleen Patterson ’14 are both spending this semester in Chicago, learning the basics of comedy and how to do just what the traveling group did this weekend.

“I actually found [the program] in high school and thought it was everything I wanted to do,” Patterson said. “And then I discounted it as a possibility — this is too amazing for me, it’s never going to happen.”

Patterson’s reservations, however, were overturned as her college career progressed. Both she and Favret developed their comedic and creative sides through classes and student groups at the College.

The Second City program consists of five different classes in which students learn the techniques of comedy, ranging from sketch writing to acting. They are even required to take a class in the history and analysis of modern comedy.

“Every class is very awesome, since it’s what we love,” Favret said.

The six-year-old comedy studies program is relatively young when compared to The Second City’s fifty-year history. Favret and Patterson will be earning 16 credits during their semester in Chicago, all of which will register as extracurricular. The classes are designed like most collegiate courses, with midterms and final exams.

One difference, however, reflects the creative tendencies that the program supports. The students are split into two acting troupes, and at the end of the semester each will perform a final showcase.

“They’re treating us like professionals,” Patterson said. “They’re holding us all to this high standard in all these classes regardless of our experience.”

That professional standard is a theme of the comedy studies program. Homework for the first week of classes included watching professional performances. Not only are students encouraged to watch comedy movies, but they are also given tickets to attend live shows presented by The Second City in the evenings.

“My favorite part is probably seeing the shows,” Favret said. “Because after class, learning every day, it’s great to go and see the pros do it. It’s a reminder that you want to do that one day and be that funny.”

Students who attended The Second City’s performance on campus saw a lot of what Favret and Patterson are learning. The classes center around both sketch and improv, but musical comedy is also part of the program.

The performers used music to their advantage. Every scene was cut right after the punch line with a blackout and loud, upbeat music while the actors prepared for the next skit, creating an active environment according to Elise Elwood ’14, who attended the performance.

Along with the intervening music, the actors used music in several of their sketches. At one point, they performed as a country singer and her band of ex-husbands.

“I’m always on the lookout for a brand new man,” actress Kate Lambert sang during the routine. “Riding through the country wherever we may roam. We need a trumpet player, so call me at home.”

Her band of ex-husbands then added, “Don’t call her.”

Patterson and Favret both hope to someday work in the same capacity as the actors in Saturday’s performance, although they understand the difficulty of pursuing a career as a comedian.

“It’s a pretty hard field to find a lot of success in and get paid for it,” Favret said. “I could do some stand up, maybe improv, maybe sketch, and make enough money doing a combination of things to do what I like and pay the bills. I think what often happens is that it ends up being your hobby. And that’s fine, sometimes you have to find a balance in order to do what you like.”

College alumni have already helped Favret in aiming for her comedy goals. As a member of AMP, she got to speak with Sara Schafer ’00 when the comedian visited campus last November. Shafer told Favret to keep trying, confessing that she had applied for Improvisational Theatre while a student and was rejected. For Favret, taking risks is an inherent part of what she wants to do.

“The best thing to do is just put yourself out there,” Favret said. “Just try everything and fall on your face — I did that for three years, and it’s worked.”

For both Patterson and Favret, everything comes back to comedy.

“You can’t stop,” Patterson said. “It’s all you do. You eat and breathe comedy all the time. You can’t just sit around wanting it.”