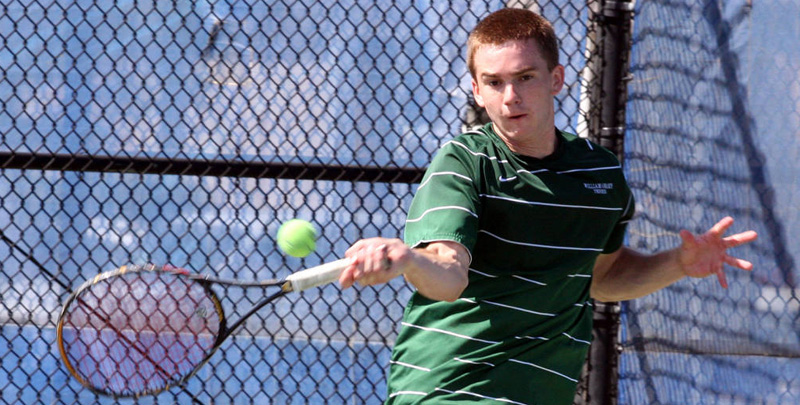 After losing three straight matches against difficult opponents, William and Mary reinvigorated its season with back-to-back wins against in-state rivals Sunday, defeating Liberty 4-2 and Norfolk State 6-1 to climb to a 4-3 record.

The wins were especially impressive given that three of the Tribe’s top players — senior Jamie Whiteford, junior Ben Guthrie and sophomore Will Juggins — were sidelined with injuries.

Faced with a short-handed lineup, head coach Peter Daub knew that everyone on his team needed to step up accordingly. And they did.

“I think it was a pretty gutsy performance without our top three players,” Daud said. “Just to have people who haven’t played much before step up makes me feel really good.”

The College benefited from strong performances across the board with each player winning at least one singles or doubles match. The wins demonstrated the depth of the Tribe team even without Whiteford, Guthrie and Juggins.

In the morning match against Liberty (3-1), the College claimed the doubles point easily with the duo of sophomore Aaron Chaffee and senior Adrian Vodislav. The singles matches, however, were trickier.

The Tribe’s No. 1 singles player, Chaffee, and No. 2 player, senior Anton Andersson, were both defeated in their individual matches. The rest of the team picked up the slack as the Tribe won in the No. 3, No. 5 and No. 6 singles matches to seize the victory over visiting Liberty.

Although the Tribe had just six hours in between the doubleheader matchups, it was stil able to put in more strong performances against Norfolk State (3-5). The duos of freshman Scott Huang and junior John Banks and of junior Ben Hoogland and freshman Matt Waddell captured the initial doubles point in routine fashion without having to finish the third game.

With a point in hand, the Tribe capitalized on its strong doubles play by nearly sweeping the singles matchups. Hoogland finished first, winning 6-0 after his opponent retired before playing the second set. The one-set victory was a confidence boost for the junior.

“I played pretty well overall, and I’ve been serving great which has been a big advantage for me,” Hoogland said.

Huang made another impressive display, coasting to a 6-3, 6-2 victory over Norfolk State’s Peter Rastromer-Pello. The win capped off a dominating doubleheader for the freshman in which he went 4-0 in doubles and singles matches.

“Well, it’s been a pretty long day, but I wasn’t too tired. Plus, I was confident I could win the match from the start,” Huang said.

Ultimately, it was the Tribe’s Anderson who stole the show at the end by battling back and forth against Robin Reithmuller to prevail in a gritty three-set victory. Each player struggled to gain an advantage throughout the hour long match.

Anderson’s cool drop shots and ferocious volleys were greeted by loud cheers from his teammates and other onlookers as he captured his  his first singles victory of the day.

The lone black spot in the College’s otherwise resounding victory on Sunday night was Chaffee’s singles loss to Norfolk State’s No. 1 Dimitry Zymaytovitch, which compounded his singles loss against Liberty earlier in the day.

Replacing the injured Whiteford and Guthrie as the Tribe’s number one singles player has not been easy for Chaffee, who fell to 0-4 when playing as the No. 1.

After the doubleheader wins, Daub expressed pleasure with the potential his team has shown in this nascent season, especially without some of their top players.

“I think we can be one of the best teams when we have our full lineup here, and hopefully we’ll get that eventually,” he said.

Lucas Harsche - April 19, 2021
I would love to say that I am prepared for the fall semester of my junior year at the College of William and Mary....