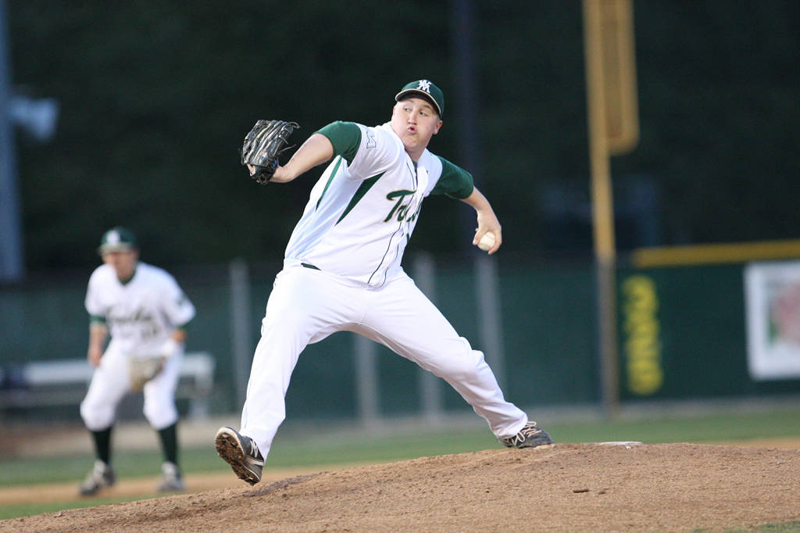 William and Mary defeated Longwood (10-10) 5-2 Wednesday night at Plumeri Park to improve its record to 13-8 (2-1 CAA). Impressive pitching propelled the College to the win, allowing the team’s batters to make a decisive breakthrough in the seventh inning.

Junior third baseman William Shaw made the decisive hit of the game, bashing a line-drive just over the center fielder’s outstretched arm to reach second base and drive in two runs. Shaw’s hit ended the 2-2 stalemate and put the Tribe up by two, a lead that it wouldn’t relinquish.

In his fourth start of the season, Wainman appeared untouchable, keeping Longwood hitless until the fifth inning. Wainman struck out all three batters in the third inning, increasing his season total to 23 strikeouts.

“I just started to get into a groove, and I just felt like anything I was going to throw was going to find its way into the zone,” Wainman said.

The College notched the first run of the game in the second inning on a sacrifice fly to left field by junior first baseman Bobby Klein. The hit brought in freshman catcher Ryan Hissey for the first run. In the next inning, the Tribe scored another run on a sacrifice fly. Senior center fielder Ryan Brown did most of the work for the Tribe’s second run, hitting a double and stealing third before being driven in by Shaw.

After four innings of shutdown pitching, trouble began to brew in the fifth inning. Wainman struck out the first two batters he faced before walking pitcher Blake Ream. Second basemen Colton Konvicka drove in Ream with a double to end Wainman’s no-hitter. The next batter, shortstop C.J. Roth, hit another double, bringing in Konvicka to even the game at 2-2. Wainman got out of the jam in his customary method of the night, striking out first baseman Scott Burkett.

“I let one batter off the hook with a walk,” Wainman said. “Then I threw a fastball inside, and the guy got a hold of it and hit to the left wall. I was upset about the next run because I just hung a curve that the guy was able to hit.”

The College’s critical seventh inning scoring spree was set up by junior second baseman Ryan Lindemuth, who advanced to third base after his line-drive to left field was misplaced by the Lancers’ outfield defense.

Brown reached base after earning a walk from the Longwood reliever, which positioned Shaw to hit a bases-clearing double. The Tribe tacked on another run in the eighth inning as senior designated hitter Jackson Shaver drove in Lindemuth.

“Those guys at the top of the order are doing what they’re supposed to do in those spots,” Pinzino said. “Lindemuth is a proven hitter; he’s been here for a while, and he’s playing up to his ability.”

In what has been an encouraging pattern, the Tribe’s relievers shut the door on the Lancer’s comeback hopes. Junior reliever John Sheehan retired all three of Longwood’s batters in succession in the eighth inning. Then, to close out the game, freshman closer Mitchell Aker earned his fifth save of the season by striking out Roth in a tense situation with the bases loaded.

“Mitchell has done a really good job out there for us as a freshman,” Pinzino said. “He’s got a good arm, and we’re looking for him to be a big part of our team in the years to come.”

The College travels to Boston over the weekend to play Northeastern in its second conference series of the season.