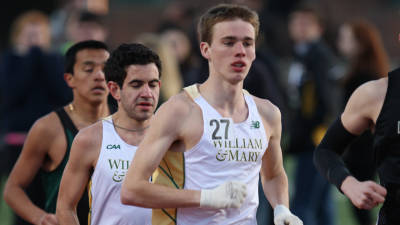 Kicking off the outdoor track and field season, this weekend’s Tribe Invitational offered a slew of impressive William and Mary victories for the spectators at Zable Stadium to revel in.

“I think this weekend went very well for us,” Director of track and field Stephen Walsh said. “The throws went very well and on the track we saw good things out there ­— even that last 4×400 looked like a real good performance.”

Hundreds of collegiate and unaffiliated athletes descended on Williamsburg to compete in the annual meet which lasted from Friday night to Saturday afternoon.

Friday night’s main event, the 10K, did not disappoint. Junior Rad Gunzenhauser set the national mark for this season with his time of 29 minutes, 50 seconds. Gunzenhauser’s time was the 13th-fastest in the illustrious history of Tribe long-distance runners.

Saturday was a long day for the assembled athletes. At noon the whistle was blown for the women’s 1,500 meter run, which got the Tribe off to a resounding start. Senior Katie Buenaga and junior Elaina Balouris took the top two spots in the event, finishing alongside each other, seven seconds faster than their nearest competitor.

Freshmen Austin Vegas and Greg Gallagher both cleared 4.80 meters on the pole vault, the seventh best score in school history, to finish first and second. Freshman Katie Johnston dominated the javelin competition, throwing 41.49 meters, 2.86 meters farther than her closest competitor. Freshman Claire Tito defeated all her collegiate opponents in the 400 meter run with a time of 58 seconds. Rounding out the day, freshmen Nathaniel Hermsmauer and Paul Gates challenged each other to the finish, placing 1-2 in the men’s 3,000 meter run.

“The freshman class has been doing real well,” Walsh said. “I mean in the 3K for the guys, 1-2 were both freshmen. Even with the throws we had Rochelle Evans, a freshman. She had a great meet. Across the board it’s a young group and I think it’s going to progress from here.”

The men’s 3,000 meter battle between Hermsmauer and Gates was one of the meet’s most dramatic races.

With one lap left Gates gambled and left his pack, trying to hold to the lead for the finish. But, fellow teammate Hermsmauer chased Gates down on the homestretch and caught up in time for a photo finish.

While it might not have been as exciting as the men’s race, the women’s 3,000 meter run made up for it with a sea of Tribe athletes at the front: eight of the first nine finishers representing the College.

After her narrow loss to her teammate in the 1,500 run, Balouris paced the squad with an impressive time of 9:37.

“We wanted to take it out kind of aggressive because we knew it was going to be mostly our team,” said senior Michelle Britto. “We just wanted to see how well we could do.”

Even with how well his team performed in nearly every event, director Walsh was nonplussed at the end of the meet.

“This is what we expected,” he said. “We expected the guys to go out there and do what they do and the girls to do the same.  Rad [Gunzenhauser] had a great performance, so did Elaina [Balouris], but that was the game-plan. It was just a good way to start off the outdoor season.”

Members of the Tribe track and field program head to Richmond next weekend for the Fred Hardy Invitational.