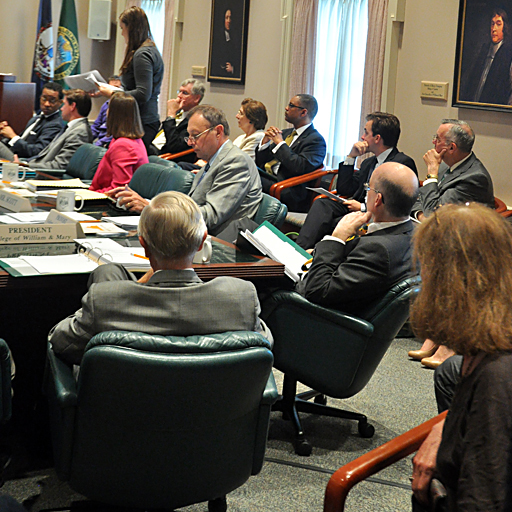 The “William and Mary Promise,” a new operating model for the College of William and Mary, was approved by the Board of Visitors Friday, promoting what BOV members called an “iron-clad” tuition guarantee for in-state students.

One aspect of the new model targets in-state student tuition, aiming to reduce the net tuition paid by middle-class families or those earning less than four times the poverty level per year on average.

For current in-state students, the new promise plans to hold annual tuition increases to no greater than the rate of inflation, which sets 2013-14 tuition for returning in-state students at $8,833.

Out-of-state students also saw an increase in prices, with a 3 percent rise in the costs of tuition and fees for a total of $38,440.

Incoming in-state students, however, will not encounter any fluctuations in price.

“We’ll add some full-time faculty slots to go along with that enrollment growth,” Jones said. “The intent is that we’re not changing the student-faculty ratio with this.”

BOV member Robert Scott J.D. ’68 drew on his experiences as a law professor who teaches about contracts to elaborate on the reciprocal nature of the College’s new promise both to raise faculty salaries and increase productivity.

“The legal definition of a promise is a manifestation of an intention to act so made that it justifies the recipient in believing that the commitment has been made,” Scott said. “And by accepting this infusion of dollars from incoming students, the faculty and staff here at the College are making a reciprocal promise. … A promise that, in short, they can and will enhance the teaching mission of the university without sacrificing, in any respect, the commitment to scholarship so essential to making this a great liberal arts university.”

The BOV approved the new plan, with one member, Pete Snyder ’94, voting the measure down.

Snyder noted any tuition increases in the current economic environment discouraged him from approving the measure.

“Making higher education a more affordable option for all Virginia students should be our number one priority as Board of Visitors members,” Snyder said in a statement. “While the plan will reduce net tuition for middle income families below $100,000 in annual income, I believe we must go deeper into the middle class to provide tuition relief and that no increases in tuition are warranted in these very tough and uncertain economic times. Because of this, I cannot support this resolution and must vote no.”

“We know William and Mary going forward must largely see to its own financial future,” Reveley said. “It’s William and Mary’s great good fortune that we have the capacity to fend for ourselves, but this will take a powerful constellation of three groups. First, of campus productivity gains from our faculty and staff. Second, of heightened philanthropic support of our alumni and friends. And third, more earned income from students who benefit from the extraordinary education William and Mary provides, always coupled with the need-based aid for students unable to pay.”