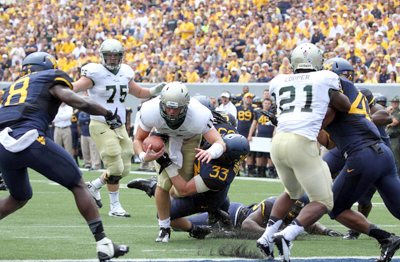 The scene at West Virginia’s Milan Puskar Stadium was one of abject confusion at halftime. If the West Virginia faithful were prepared for a stiff test from William and Mary, they didn’t show it.

The only noise to be found amid the sea of roughly 55,000 yellow shirts was from a small sliver of dark green, hidden in the right side of the south end zone. The College held a 17-7 advantage going into the locker room, and even though the Mountaineers (1-0) would win by a touchdown for a score of 24-17, there was a sense that the Tribe (0-1) had still made its statement. This year could be special.

“I don’t know whether we ran out of gas, whether the depth got to us, or the heat got to us, or whatever,” head coach Jimmye Laycock said. “We just weren’t able to make the key plays in the fourth quarter to get the win. But overall, I thought our effort was outstanding.”

The main question for the College entering the game was the quarterback position. Senior Michael Graham, playing while the injured duo of junior Raphael Graham and senior Brent Caprio didn’t dress, performed admirably in the first half. Graham scrambled and showed confidence in and out of the pocket before faltering in the second. All told, Graham was 18 of 27 for 207 yards with two touchdowns – one running, one throwing – and an interception.

The first West Virginia possession of the game, an eight-play, 67-yard touchdown drive, seemed to foreshadow a blowout. The Tribe, however, wasn’t swayed.

After a missed Mountaineer field goal, Graham led the offense down the field and connected with junior running back Darnell Laws for a 1-yard score. An outrageous 40-yard catch by junior wide receiver Tre McBride broke the game open. McBride finished with 108 receiving yards.

“We took a shot,” McBride said. “I was confident in myself and, to be honest, I didn’t see any safeties, so I only thought ‘I got to get that ball.’”

In the Tribe’s next drive, the offense showed that the first touchdown wasn’t a fluke. Graham and company tore through the Mountaineers’ defense for 88 yards and another seven points.

Again, a long completion to McBride set up the score. This time, however, Graham took it in himself on a 5-yard scramble. The College would further punctuate its lead by converting a fumble reception into a 29-yard field goal by junior John Carpenter, building a 17-7 lead at the half.

More impressive than the offense’s first half fireworks was the Tribe’s stingy defense against the Mountaineer’s vaunted “air-raid” offense, which averaged almost 40 points a game last season. After surrendering the early first touchdown, the Tribe’s defense buckled down, preventing the Mountaineer offense from threatening again in the half. The admirable defensive effort culminated in three consecutive three-and-outs to end the half.

If Saturday was a “tune-up” game for West Virginia, it sorely needed it. The Mountaineers came out sluggish in the first half, but found their legs in the second. The Mountaineer offense reinvigorated the home crowd in the third quarter with a field goal and a flash 69-yard touchdown reception, leaving the Tribe with a tie game and a defense searching for answers.

While the College’s defense showed cracks, the offense sputtered through a scoreless and largely tame second half. Graham lost his first-half rhythm as the play calls went away from the first half’s deep throws and, instead relied upon largely conservative play calling in the second half. McBride snagged his third big catch of the game in the third quarter, but the ball was woefully underthrown, creating a 28-yard gain to mid-field instead of a potential touchdown. The Tribe would never get as close to the end zone again.

West Virginia grabbed its first lead since the first quarter with just over three minutes left in the game by taking advantage of excellent field position afforded to it by its defense and special teams. The touchdown put the Mountaineers up seven points and forced Laycock to open up his offense to find the equalizer.

With three minutes left to find an answer, Graham had to find his first half form. Instead, Graham threw an interception on the first snap of the drive, sailing a pass well past his target and into the arms of West Virginia’s Darwin Cook. Graham’s late-game sluggishness and poor decision-making complicate his case to remain the starting quarterback after Caprio and Ortiz return from injury.

Although the Tribe far exceeded expectations – they came into Saturday’s game as a 32-point underdog – the players were far from satisfied with their performance.

“I don’t think there’s anything to be happy about,” said McBride. “Obviously we played well; there were some highlights in the game.  We worked hard; we came into halftime with the lead. But at the end of the day, we lost and there’s nothing to be excited about. But what we are going to do is we’re going to put this game behind us and work to smash everyone else on our schedule.”

The College’s first home game is Saturday against Hampton at 7 p.m.