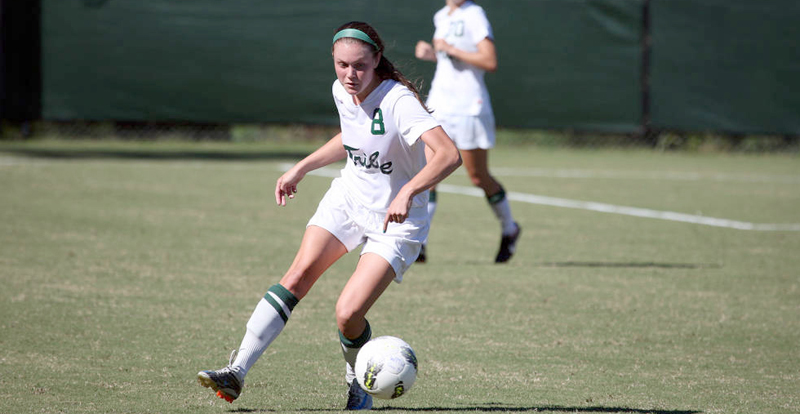 William and Mary grabbed its third win of the season Tuesday night, dropping Radford 2-1 in a nail-biter at Martin Family Stadium. The College fell behind early in the match before rallying after halftime and finishing off the tenacious Highlanders in overtime.

The Tribe (3-1-2) dominated possession for almost the entire game, firing a staggering 38 shots in 97 minutes, placing 11 on goal. The Tribe allowed just two shots on target and held Radford scoreless for 93 consecutive minutes.

“We were the better team basically for … however many minutes it was,” head coach John Daly said, “It’s a shame that we had to go to overtime to do it, but all’s well that ends well.”

Radford struck four minutes into the contest, when forward Melanie Priestly corralled the ball off of a blocked shot and fired a strike past sophomore goalie Caroline Casey to give the visitors an early 1-0 lead.

The College controlled the ball for most of the first half, logging a striking 18-3 advantage in shots. Despite the possession imbalance, the Tribe lost several promising opportunities to errant passes, a physical Radford defense and a superb first half by Highlander goalie Che Brown. Brown had four saves before intermission and broke up several other College scoring chances.

Despite facing excellent defense, the Tribe nearly tied the game multiple times in the opening 45 minutes. A Tribe corner kick in the 14th minute set up two shots that nearly found the net, but Radford defenders deftly blocked each just short of success.

A second particularly near-miss came in the 38th minute, when senior forward Dani Rutter ripped a shot from the right side of the box. The strike looped past the defenders before ricocheting off the left corner of the crossbar. Eventually, the College was forced into halftime trailing 1-0.

The Tribe’s shooting onslaught continued in the second half, and the team broke through in the 48th minute when sophomore forward Barbara Platenburg took a precise crossing pass from Rutter and hammered home a shot to equalize the score at 1-1. After missing nine clear chances in the first half, the goal provided hope that the College offense was kicking into gear.

The Tribe held Radford to just four shots in the second half, and only twice did the visitors threaten to score. Both shots were sharply deflected by senior defender Ali Heck to keep Radford scoreless for the half.

The College, by contrast, tested the Radford defense for the rest of the night. The closest chance came in the 78th minute when junior forward Emory Camper’s blazing shot from just outside the penalty box hit the crossbar. Rutter also came close to scoring just four minutes later, but Brown saved her attempt.

“It’s definitely frustrating when we’re getting that many opportunities in the final third of the game … but it motivates us to keep shooting and gets us pumped up,” Platenburg said.

After regulation time elapsed with the score still tied 1-1, the Tribe entered its fourth overtime contest in six games. The College continued to dominate play in the extra period, preventing Radford from attempting a single shot while firing four of its own.

After several minutes of tense play, the Tribe finally caught a break in the 97th minute, when Platenburg broke free of her defender and zipped a pass to Rutter just right of the net.

The senior did not hesitate to send the go-ahead goal into the opposite corner of the net, ending the match and giving the Tribe another win.

“Our season has had a lot of ties and a lot of overtimes, so to win a golden goal … definitely gives us motivation,” Rutter said.

The win extends the Tribe’s unbeaten streak to five games, dating back to its opening loss at Georgetown. The squad will put that streak on the line when it hosts Pennsylvania at 7 p.m. Friday.