Home Latest News Board of Visitors Behind the rankings: Halleran reviews methodology 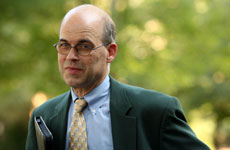 Provost Michael Halleran delivered a report on the College of William and Mary’s recent U.S. News and World Report rankings in the Board of Visitors’ Committee on Academic Affairs meeting Thursday morning.

While praising the College’s performance and ranking as the sixth best public institution in the nation, Halleran discussed the methodology behind the rankings as well as areas for potential improvement.

“First of all, most of these presidents and provosts haven’t got a clue about most of these schools,” College President Taylor Reveley said. “They’re going by reputation. I think the fact that we call ourselves a college hurts us because there’s not much of a pervasive belief out there that we are a research university.”

Halleran cited the College’s general reputation as one area that can be improved, along with financial resources, where the College was ranked 114. However, he emphasized that the U.S. News and World Report rankings did not take the William and Mary Promise, approved last spring, into consideration.

“I will be stunned and shocked if that 114 doesn’t improve, but I have no way of saying whether based on what we’ve done or what others have done, [how much] we should go up,” Halleran said.

In most categories, the College has remained relatively consistent: Its 6-year graduation rate, freshmen retention rate and graduation rate performance have not changed drastically over the past few years. The College also moved up to 29 in the alumni giving rankings this year, improving from 33.

In another move up, the College ranked first among public universities for undergraduate teaching.

Halleran emphasized it is difficult to anticipate how any one change at the College will affect its ranking.

“When we talk about how much impact one thing will do, whether it’s the Promise, having our soccer team ranked number one at the end of the season, going to the NCAA tournament with our basketball team — it’s hard to know how much we will move and movement is not a lot,” Halleran said.

He added that the College’s ranking each year is relative to other schools’ performance and is crucial because of the image it projects to prospective students.

“It matters to people who matter to us,” Halleran said. “Students in high school and their parents, this is one of the things they really pay attention to. … It’s tough company and nobody on that list, none of those schools is standing still.”

In addition to Halleran’s presentation, Committee on Academic Affairs’ Vice Chair Kendrick Ashton ’98 discussed the potential impacts of the William and Mary Promise on faculty, noting that the committee will prioritize the approval of policies that appropriately allocate resources to faculty across campus. The committee also briefly mentioned that curriculum review continues to move forward and is tentatively scheduled for a final vote in December or January.