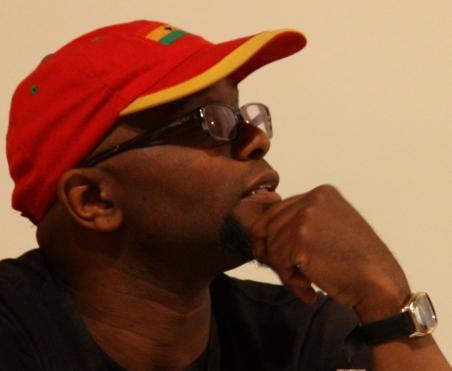 During an accolade-filled introduction for poet Tyehimba Jess — during which it was revealed that, in addition to teaching at the Juilliard School, winning numerous prestigious awards and publishing a book in the National Poetry Series, Jess had also served as the Poetry Ambassador to Accra, Ghana — someone in the second row started laughing.

“Who is this guy?” the audience member asked.

Seeing the man in the audience, Jess started to laugh as well.

The audience member was Tim Siebels, a famous American poet and National Book Award nominee, who once taught Jess at a poetry workshop called Cave Canem (Latin for “beware the dog”).

“Once the teacher, now the student,” Siebels said, describing his evolving relationship with Jess.

Like their relationship, Jess’ poetic style has changed over the years. Once a performer at The Green Mill in Chicago — the birthplace of the “slam” movement in the 1990s —  Jess has not slammed since 2001.

Instead, he began to work on his book, “leadbelly,” which tells the story of Huddie Ledbetter, a convicted murderer and celebrated blues player, from the perspective of dozens of people and objects which surround him.

When Jess came to the College of William and Mary’s St. George’s Tucker Hall for the inaugural reading of the Patrick Hayes Writers Series, he had something new to present.

After reading six poems from “leadbelly,” Jess projected a new poem, “Christine and Millie McCoy,” onto the screen at the front of the room. Before he began to read, it was clear that the new poem was different, at least in form, from anything that had come before it.

This is because the poem was laid out in a style that Jess invented —  the “syncopated sonnet” —  to symbolize the anatomy of its subjects, pygopagus twins conjoined near the abdomen. The sisters were born into slavery in 1851, and like many of the real-life characters in Jess’ upcoming work, they lived largely unrecorded lives of intrigue and adversity.

Associate professor of English Hermine Pinson, who arranged the event, said that this form offers the reader agency.

“One can listen to the music of Jess’ lines, but one benefits as much from reading them in their multiple trajectories that practice in their very form the depth and multiplicity of meaning that is the poem’s trademark,” Pinson said.

Damian Carpenter, an adjunct professor of English at the College, said that Jess’ development of form is “groundbreaking.”

Tentatively titled “Olio,” the new collection is named after the second part of a typical minstrel show, in which white actors in blackface would make political speeches.

Jess said his interest was in “dealing with a lot of folks whose lives were never recorded but whose experiences were embedded deep in the national consciousness.”

“I try hard to empathize with the people I’m writing about in a way that will enlighten me and readers,” Jess said.

In addition to the McCoy sisters, in “Olio,” Jess also writes about Bert Williams and George Walker, an African American comedy duo who, at the turn of the 20th century, co-opted the minstrel show.

After Jess read from “Paradox,” which also was projected onto a screen, he showed the audience examples of how one might read his poem in a three-dimensional format. He had two paper cutouts in the form of cylinders and one as a Möbius strip, a shape whose paradoxical properties were discovered in 1858, which can be formed by taking a band of paper, twisting it 180 degrees, and connecting the edges.

Carpenter said the necessity for instructions is a weakness in Jess’ poetry, particularly at a time when many readers have grown accustomed to “read[ing] tweets of the most inane thoughts and doing.”

“But the power of Jess’ new work is that one can’t help but be amazed at the word magic he performs within such a strict form,” Carpenter said.

Almost 100 years before Jess handed out his three-dimensional poetry, and more than eight decades before he participated in the slam poetry movement in Chicago, E.E. Cummings famously said, “the day of the spoken lyric is past.”

At The Green Mill, Jess and his slammer companions proved that the spoken lyric will not go away quietly. On Thursday in Tucker Hall, Jess showed that Cummings’ second hope, a belief in a modern poetry that “builds itself, three dimensionally … in the consciousness of the experiencer,” may exist alongside it.