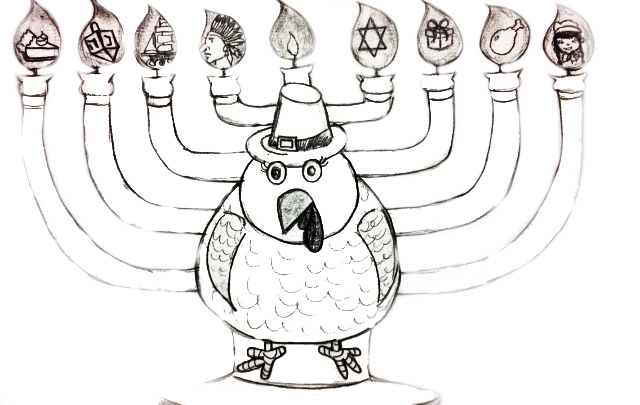 Dear Mom and Dad,
I know you don’t believe in the commercialization of holidays, but something great is upon us. You could call it the ultimate holiday fusion, maybe even the greatest day of our lives. Tuesday, Nov. 28, we have the opportunity to experience all the glory that is Thanksgivukkah.
Mom, you hate going to the mall after Halloween. You said that my Charlie Brown Christmas tree is ridiculous and you make me put it away when company comes over. That’s okay.
Dad, you despise holiday tunes. Also, last time you got Mom a holiday present, it turned out to be a rake. No, that doesn’t make you the Grinch, not one bit. But guys, this season has the potential to be something beautifully different. Here’s why we should celebrate like the Hebrew Pilgrims this Thanksgivukkah:
Contrary to popular belief, Hanukkah is not a holiday but rather a festival.
As you often iterate, Hallmark has commercialized this festival as the Jewish competition to the birth of baby Jesus. And that’s just ridiculous.
Hanukkah, the Jewish festival of lights, commemorates the Maccabee’s miraculous triumph over Antiochus and the reclamation of the Second Temple. According to tradition, after the victory, the Jews had very little oil left to light the menorah in the temple due to the destruction by the Greeks. There was only enough oil left to burn for one day, but, by some miracle, the oil lasted for eight days. Thus emerged the eight miraculous days of Hanukkah.
In contrast, Thanksgiving is not a miraculous holiday at all. It is a gloating celebration of the colonists’ brutal takeover of Native American land. But hey, when we’re in elementary school, we all learn a wonderful story about the pilgrims and Native Americans trading corn and eating Turkey together — that Thanksgiving is about love and patriotism.
College has taught me that such historic events are open to interpretation. So, let’s choose to believe the happier version of the story.
Two percent of the American population identify as Jewish, but, oftentimes, it feels like the rest of the United States celebrates Christmas. We, the two percent, spend the months leading up to Christmas being overwhelmed with images of reindeer and good old Saint Nick.
The whole month of December, we listen to Christmas music played on the radio 24/7. We ogle at the Christmas decorations that inundate our malls and grocery stores … and just about every other public place. We have all this fun, exciting, cheerful, light-filled, Christmas-themed lead-up. And to what? Nothing.
On Christmas Day, we like to eat Chinese food and go to the movies. My favorite tradition is the Christmas morning walk through empty, frozen streets. Pretty much everyone you see out on Christmas morning is a Jew, so it is perfectly acceptable to greet him or her with a friendly “shalom.” The life of a Christmas-loving Jew can be lonely.
But this year, it’s our turn.
Our turn for something commercial and novel — a holiday to be celebrated and revered. We now have something no one else has.
Thanksgivukkah may just be God’s greatest gift to the Jewish people. Modern miracles are not common in Judaism. But Nov. 28, the wind is set to change, for Thanksgivukkah is the ultimate holiday union.
This is the only time in our lives that Thanksgiving and Hanukkah will coincide.
The Internet has turned into a breeding ground for Thanksgivukkah recipes of tantalizingly delicious foods combining all that is wonderful about the Thanksgiving meal and Jewish cooking. And we all know that there is a lot of wonderful Jewish cooking.
Some of the best holiday fusion recipes out there include sweet-potato latkes, cranberry applesauce, Manischewitz-brined roast turkey and horseradish mashed potatoes. There is no limit to the amazing variety of the potential Thanksgivukkah menu.
Some people — cough, cough — say, why short-change two perfectly wonderful celebrations by combining them? They say that Thanksgivukkah ruins the individual value of each of the two holidays. How wrong can you get?
Why shy away from this once-in-a-lifetime holiday fusion event, just because the preparation may take a little extra work? Thanksgivukkah is coming this year, and after this year, we will never experience it again. So let’s revel in the fun of it.
Who knows, next Thanksgivukkah — whenever that is — ABC Family may have a “25 Days of Thanksgivukkah” movie marathon. The future is ours. This is our time. Let’s take a cultural stand. Let’s celebrate Thanksgivukkah.
Love,
Your Hallmark-holiday loving, commercially corrupt daughter