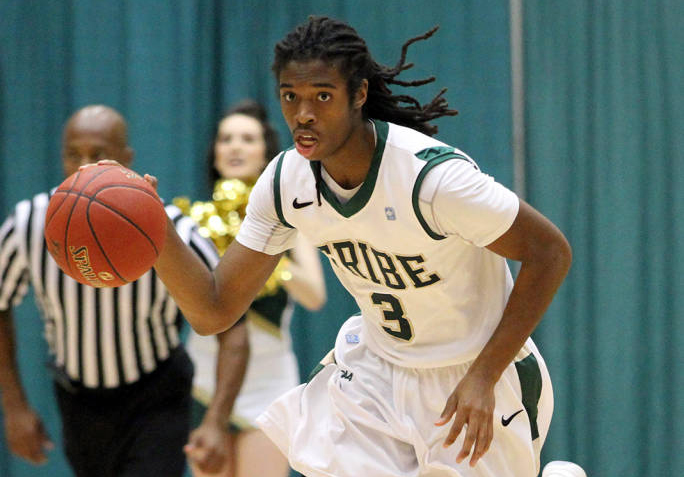 Coming off a 1-2 start and a difficult road game against No. 16 Wichita State, William and Mary could have used an easy home win Wednesday night. Instead, an aggressive, energetic High Point team handed the Tribe an 80-69 loss at Kaplan Arena.

The Tribe as a whole could not find an offensive rhythm; it shot 41 percent from the field and 34 percent from beyond the arc. High Point out-rebounded the College 42-31 and scored 42 points in the paint.

The Tribe accounted for just one lead in the entire game, scoring the first point of the match. After the College’s 1-0 lead quickly evaporated, it was all High Point the rest of the way.

The Tribe drew first blood when sophomore guard Terry Tarpey hit a free throw to give the Tribe a 1-0 lead. Consecutive fast-break dunks by Panthers forward John Brown staked the visitors to a 6-1 lead, however, and left the College playing catch-up the rest of the game.

After Thornton scored five straight points to cut the High Point lead to 16-11, the Panther’s responded with a 9-0 scoring run over the next three minutes. During the drought, the Tribe missed three lay-ups as High Point’s lead swelled to 25-11.

“They played good defense for the most part, but we hurt ourselves with our offense,” Thornton said.

The Tribe finally cut the deficit to 34-26 with freshman guard Daniel Dixon’s three-pointer with just over three minutes left in the half, but the Panthers registered another 9-0 run. All nine points came from Panthers big-men Allan Chaney and John Brown, who dominated the paint on both sides of the floor and powered the Panthers to a 43-29 halftime lead.

The Tribe appeared a step slow in the entire first half. It committed 11 turnovers and seemed overwhelmed by High Point’s size and speed in the rough opening half. Notably, the Tribe managed just eight points in the paint despite repeated attempts to get post-up touches for Rusthoven or drives to the basket from the perimeter players.

The Tribe opened the second half with consecutive post-ups by Rusthoven. The senior made his second lay-up and scored a three-point play two minutes later to get in gear, but High Point still outscored the Tribe 11-6 in the first five minutes of the second half to stretch its lead to 54-35.

The Tribe offense repeatedly flashed explosiveness in the second half, but each scoring run was combated by timely baskets from the Panthers. Rustoven scored 16 second-half points with Thornton adding 10, but the Panthers’ oppressive fast-break, superior rebounding and overall athleticism left the Tribe unable to close the gap.

When Panthers’ Devante Wallace hit consecutive three-pointers to push High Point’s lead to 67-48, it seemed that the final eight minutes of the game would be completely fruitless. However, the Tribe continued battling to the final buzzer. At one point, the College went on a 10-2 run to close the deficit to 69-58 with five minutes remaining. But High Point settled down to match points with the Tribe the rest of the way, and the Panthers finished the game with an 80-69 win.

The Tribe struggled from wire to wire against High Point. Its defense was particularly helpless against the Panthers’ frontcourt tandem of Brown and Chaney, who combined for 37 points, 17 rebounds and five blocks on 67 percent shooting to dominate the game.

“We knew coming in they were great players, and we prepared for them being great players,” Rusthoven said. “We just had things in place to stop them, and we didn’t execute them when game time came.”

The loss was clearly disappointing for Shaver and his players, but the team has little time to dwell on the loss.

The Tribe will face Rutgers Saturday afternoon in New Jersey and then will return home to take on VMI at Kaplan Arena next Wednesday. Tip-off is set for 7 p.m.