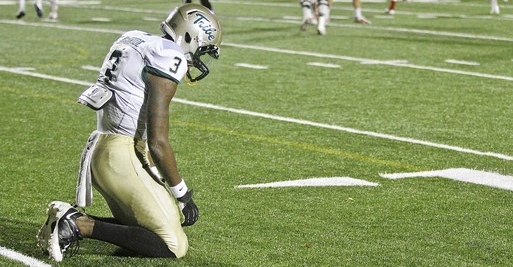 A season that had seemed so promising just two weeks ago fell apart as No. 19 William and Mary suffered a 31-20 drubbing at the hands of rival Richmond Saturday.

The Tribe’s aspirations of reaching the Football Championship Subdivision playoffs for the first time since 2010 hinged upon a victory in the 123rd iteration of the Capital Cup. On paper, it seemed realistic: Richmond had previously lost to Rhode Island, whom the Tribe beat 20-0.

The Tribe could have been selected for an at-large bid with a win; instead, the loss ended the season early for yet another year.

“Credit to Richmond, they did a great job. [Richmond] threw it around well, moved it on us very well… I’m very disappointed in the way we played, both offensively and defensively,” head coach Jimmye Laycock said postgame. “It really started off on the defense. We could not seem to get in a rhythm.”

The College’s defense, entering the game as the top scoring defense in the nation, put forward one of its worst performances of the season. After giving up just 32 points in its prior four games, the Tribe surrendered 31 points Saturday, including 24 in the first half. Touted for its run defense, the Tribe had no answer for Spiders running back Seth Fisher, who compiled 135 yards on 23 carries.

Meanwhile, the College’s offense, led by senior quarterback Brent Caprio, couldn’t keep pace with Richmond. Caprio had a solid outing, throwing for 250 yards on 22 of 38 attempts, but he failed to throw a touchdown. The running game, which has been pivotal to the College’s offensive success this season, was largely inconsequential. Sophomore running back Mikal Abdul-Saboor led the team with just 43 rushing yards.

After the Spiders scored a touchdown on their opening drive, the College’s defense seemed to be back to its old form as junior linebacker Airek Green returned a forced fumble 40 yards for a touchdown — the fifth defensive touchdown of the season. The score put the Tribe on top 10-7 and seemingly in control of its postseason fate, but Richmond would soon prove too much.

Spiders quarterback Michael Strauss converted a crucial fourth and three from the College’s 28-yard line as part of a rousing go-ahead touchdown drive that gave Richmond a four-point advantage. Strauss threw for 233 yards on the day.

After junior placekicker John Carpenter tacked on a field goal to narrow the Spiders’ lead to just one point, Strauss led the Spiders on a 75-yard drive that culminated in a five-yard touchdown.

A blocked punt deep in its own territory forced the College defense to protect a short field once more before halftime. The Tribe surrendered just a field goal but entered halftime trailing 24-13 and searching for answers.

No answers came out of the break. The Tribe surrendered another long touchdown drive on the first possession of the second half.

With Richmond’s lead bloated to 31-13 and the season on the line, the College’s coaching staff tried to revive its anemic offense with some trickery. But that failed, too. Abdul-Saboor’s misguided pass was intercepted, ending a promising drive.

The Tribe’s only score of the second half came with just 30 seconds remaining. Caprio dove into the end zone for a one-yard touchdown to partially save face before both the game and season came to an end.

All in all, Laycock and the College enjoyed a five-game turnaround from last season’s 2-9 record.  But the late season stumble will sting for some time to come.

“You hate when you play a game … and you don’t play your best. We have played a lot better than we played today. It is what it is, you are who you are,” Laycock said.

“Got our seven wins; now it’s time to go home.”