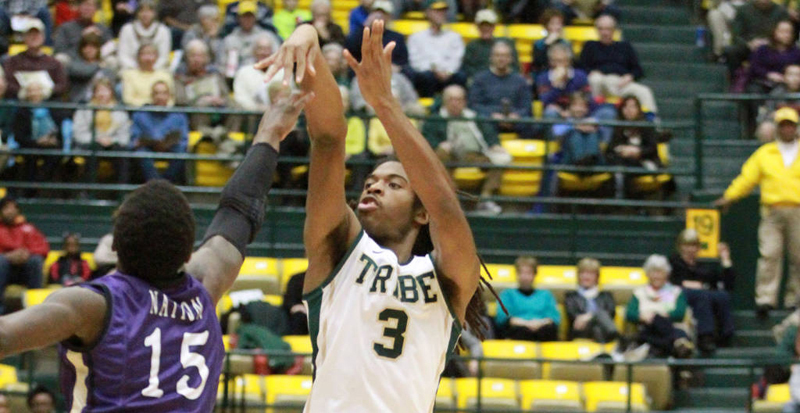 The Tribe jumped out to an 18-9 advantage in the first 10 minutes on the strength of its three-point shooting, as senior forward Kyle Gaillard and sophomore guard Terry Tarpey drained three-pointers on subsequent possessions to start the game. Senior guard Brandon Britt came off the bench with a hot hand, sending home two three-pointers early in the matchup. The Tribe’s 13 three-point shots were the most all season, and its 62 percent three-point percentage marks the fifth-best effort in school history.

“We can shoot it, but I thought what was so important [about] those [shots was] that they were shots out of our offense,” head coach Tony Shaver told Tribe Athletics. We really ran our offense exceptionally well that first half.”

The Tribe’s accuracy from deep in the court would become a theme of the game, but Thornton’s silence would not last. Thornton’s first shot attempt of the game came with eight minutes left in the first half, and it ended with three more points for the Tribe. In the second half, facing a hostile crowd and a resurgent Dukes team, Thornton scored 16 points to cement the Tribe’s win. Thornton got plenty of help along the way, especially from freshman guard Omar Prewitt.

All told, Thornton would go on to score 26 points primarily through 6 of 9 three-point shot attempts, including a pivotal three points to end a 10-0 Dukes run with two minutes left in the game.

“I got a couple open looks, got some spacing, finally, and luckily I was able to hit some shots,” Thornton told Tribe Athletics.

Thornton hit a three-point shot in the final seconds of the first half to send the Tribe into halftime with a 41-30 advantage. The second half, however, proved much trickier.

The College’s double-digit lead evaporated quickly in the minutes following the break. Benefitting as turnovers piled up, the Dukes slashed their way to a 49-48 lead with 13 minutes left after a 12-2 run.

In the ensuing minutes, the Tribe regained a comfortable lead, holding a 68-57 advantage with eight minutes remaining. But JMU would storm back again to the tune of a 10-0 run that placed the Dukes within one point of the Tribe with three and a half minutes on the clock.

JMU’s Convocation Center was at fever pitch. Dukes fans had watched their team persevere through the Tribe’s incredible three-point shooting and chip away at an 11-point deficit. The much-needed rivalry win seemed within grasp, but heartbreak came from a familiar source.

Thornton buried the Dukes’ 10-0 run with a three-pointer on an assist from Gaillard to extend the College’s lead to four with just over two minutes remaining.

“Kyle had a great skip pass, that’s something we made an emphasis of coming into the game because of how they play defense,” Thornton told Tribe Athletics. “Great skip pass and I was able to hit the shot.”

Despite the Dukes staying in contention throughout, the Tribe converted 10 of 14 free-throw attempts in the final two minutes to seal the victory. Prewitt nailed the last four free-throw attempts of the game to frustrate any hopes of a JMU comeback.

“Great road win, that’s all I can tell you,” Shaver told Tribe Athletics. “Great gutty performance by our guys, a little spotty at times, but … we knew it would be a battle.”

The College travels to play North Carolina-Wilmington Wednesday. The Seahawks are 0-7 in CAA play, but they are coming off a one-point loss on the road at conference-leader Delaware. Tipoff is set for 7 p.m.