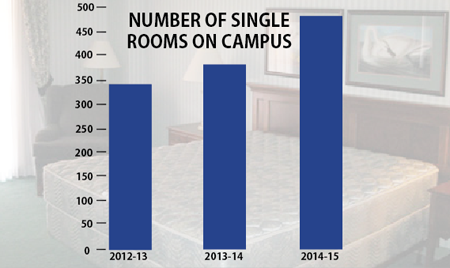 One may be the loneliest number, but when it comes to choosing housing in college, some students prefer to live without a roommate in single rooms.

A recent article in The Atlantic titled “The End of the College Roommate?” said that at many colleges and universities, offering an increased number of single rooms has become something of a trend, although singles are still the exception on most campuses.

At the College of William and Mary, Director of Residence Life Deb Boykin said there were 380 available single rooms for the 2013-14 academic year. Before the acquisition of the Hospitality House, 339 singles were available on campus. Next year, 474 singles will be open, marking an increase of 94 rooms from this year.

However, Boykin said she does not necessarily see a tendency toward an overwhelming number of students requesting to live by themselves.

“What may be a trend on other campuses might not be a trend on our campus,” Boykin said. “Anytime we’ve built new housing … like when Jamestown opened in 2006, we did focus groups to see what our students wanted, and they wanted a mix of doubles and singles because many of our students still like the experience of sharing a room with someone.”

The increase in the number of single rooms next year is due to additional rooms becoming available in One Tribe Place, as well as some rooms in the basement of the Bryan Complex being converted from doubles into singles, Boykin said.

In freshman halls, Boykin estimates that there are about 17 available singles on campus, located in the Green and Gold Village, Jefferson Hall and Yates Hall.

With a limited number of singles on campus, students will almost inevitably live with a roommate at some point in their years at the College. Boykin said she finds many students have an affinity for the experience of sharing a room.

“I think there’s a friendship and companionship that you have in a double room that you would miss in a single room,” Boykin said. “Of course, the people who have single rooms on campus have the benefit of being able to stay by themselves in the room, and then they can come out into the hall and have that community there.”

Laura Penalver ’16, who has lived in both a double and a single at the College, agreed that there are benefits to both experiences.

“I appreciate having my own space and I appreciate being able to come back to a quiet room and being able to do my work,” Penalver said. “But I’m sure if I met my soul mate and my best friend forever, I would love to be in a double with them.”

J.W. Seo ’14 has also experienced life in both situations, living in a single as a junior and in a double every other year at the College.

“[The single] was really boring,” Seo said. “I like to have someone in my room. We’re never going to have this after graduation: There’s four years of college and it’s all about the experience.”

He added that he found himself to be more productive when living with another person who could encourage him to keep working.

The Atlantic article noted that another benefit of life with a roommate is the potential to develop friendships that extend beyond the four years in college.

“We find that people later in their adult years, when they’re out there in the real world will tell stories. … How often do you hear people saying, ‘Oh, my college roommate?’” Boykin said. “There’s still such a value placed on that experience.”