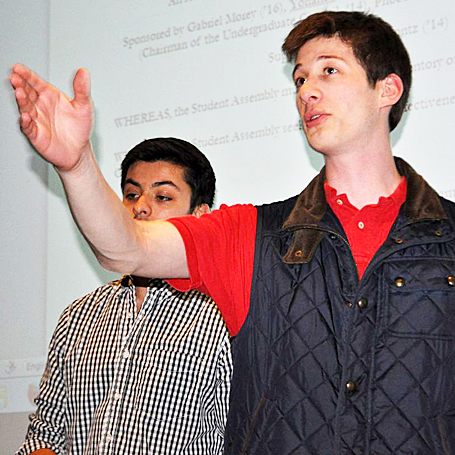 The College of William and Mary’s Undergraduate Council met with several Student Assembly senators Tuesday night in a meeting focused on reforming the council’s role and composition.

To support the legitimacy of merging these two roles, SA Chief of Staff Drew Wilke ’15 said it is more difficult to get juniors and seniors to run for these positions, so combining these roles may reduce that problem.

These reforms came at the recommendation of the Code Revision Committee, which met Saturday and suggested making significant changes in the function of the council.

Senior Class President Grace Martini ’14 explained that the senior class officers must deal with additional programming at the end of the year due to Commencement, which adds extra work. Martini said her concern is that one fewer officer would only increase the workload already placed upon senior officers.

To remedy that concern, it was suggested that the senior class could appoint a specific Commencement liaison to help with the planning and organization of Commencement.

After some discussion, Class President Brianna Buch ’15 suggested that the council consider pushing up the merger of the vice president positions, effective this coming election.

Wilke, who worked on the concept of merging of these positions last year as a senator, encouraged the council to pursue Buch’s suggestion of moving up the merger.

“[The idea of] merging the two VP’s was brought up last year … but it just didn’t work out in time,” Wilke said. “If you guys all feel that it should happen, why not do it now? The rest of the Student Assembly is definitely in support of this. … It’s really not going to affect that much.

It’s just going to help the body, so I would say go for it.”

After taking a straw poll, which showed that most council members were in favor of merging the vice president positions, the group decided the council should try to pass the change in time for the elections. Sen. Gabriel Morey ’16 subsequently drafted two bills to reform the constitution of the SA and the Code of the SA to reflect the merging of the two positions. The bills were introduced in the senate the same evening.

At the meeting, representatives and senators also discussed the idea to start fundraising for the school earlier in a student’s time at the College. Instead of only asking seniors to contribute, students would be asked as early as freshman year to give back to the institution.

This idea of asking students to give earlier on made several council members weary. The straw poll on the concept of starting a culture of giving earlier at the College had mixed results.

“[For freshmen,] we just started [at the College] and everyone is kind of still basically coming to terms with the amount of money we are paying to attend this school, and it seems that for some people that might be pressure put on them kind of right away to contribute and give back when they already feel like they are having to give up a lot to be able to go here,” Class Secretary Emily Heath ’17 said. “I think it’s good to create a culture of giving, but I think it’s best to start out slowly.”

Senators and the council also discussed making the council more involved in all major ceremonies that occur on campus, including Commencement and Charter Day, among others. Most council members were in favor of the reform.

“I feel like really the point of this inclusion in Undergrad’s role is just because it will help us serve … more [as] liaisons towards the undergraduate students, between them and Student Leadership Development or other offices on campus,” Secretary of Undergraduate Council Yousif Al-Amin ’16 said.

The council plans to pass the reforms concerning the merging of the vice president positions, which the senate passed Tuesday night.