Home Variety What are: TWAMPS on “Jeopardy!” 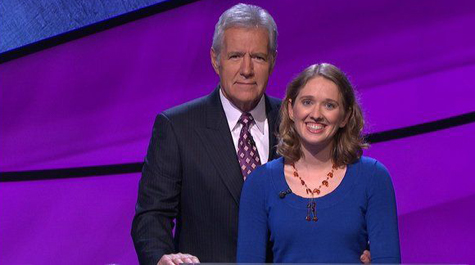 Post-college plans for the typical College of William and Mary student include attending graduate school, trying not to panic about finding the perfect career and beating an 11-time “Jeopardy!” champion. Wait, what? For graduate Diana Peloquin ’08, all of this rings true.

Peloquin competed in two games of “Jeopardy!” which aired in early March. A long-time trivia enthusiast and fan of the show, Peloquin reveled in the overall experience.

“Having watched the show for so many years, it was really cool to turn the corner and see the set,” Peloquin said.

In addition to being exciting and “absolutely nerve-racking,” Peloquin appreciated the effort of the production staff to create a friendly and encouraging atmosphere. Sitting out the first day also allowed her to observe from the audience and to calm her anxiety.

“Luckily, having the first night off really allowed me to recharge and gain the confidence to take the stage the next day,” Peloquin said.

Peloquin still looks to her days at the College as influential in her game-show success and post-college life.

“William and Mary definitely gave me this attention of always wanting to learn new things, and that has definitely continued for me after I graduated,” Peloquin said.

As a political theory and history major, synchronized swimmer and musician in the orchestra, both academics and electives contributed to her well-rounded expertise. A true TWAMP, Peloquin cited rigorous study habits and an attentive attitude toward classes as crucial to her achievements.

“I studied a lot and paid attention in all of my classes, which was really helpful, and taking electives outside of my department also helped,” Peloquin said.

Peloquin studies law and social work as a graduate student at the University of Michigan. Her time on “Jeopardy!” was both thrilling and eye-opening; returning to school from her mini-celebrity moment reaffirmed her current career-path plans.

A proud graduate of the College, Peloquin encourages others to participate in the game show.

“I would love to see other William and Mary students and graduates make it on ‘Jeopardy!’” Peloquin said.

Zach McDonnell ’15 and associate professor Colleen Kennedy have already fulfilled this aspiration. Both appeared on “Jeopardy!” in the past.

McDonnell, known to carry around a huge atlas as a child, has delighted in studying disparate facts since he was young. It was only natural that he became obsessed with “Jeopardy!” after watching marathons of the show with his family.

“I have been watching ‘Jeopardy!’ with my mom and sister for about seven years; it’s hard not to fall in love with [the show] after watching Ken Jennings,” McDonnell said.

In high school, his interest in trivia grew after becoming a member of the scholastic bowl team senior year and when, with encouragement from his mother, he applied to appear on the college edition of “Jeopardy!” during his freshman year.

McDonnell studied popular topics such as the Bible, classical music and opera in preparation for the show, but mainly attributes his advancement to his long-term commitment to watching the television show.

Along with the monetary benefits, McDonnell loved the traveling and found personal meaning in the experience.

“It broadened my horizons. I grew up without money, and all of a sudden, because of this dumb passion for trivia, I was in Los Angeles and meeting Alex Trebek and being on national television,” McDonnell said,  “The doors of life seemed way more open to me.”

Kennedy applied to be on the show when tryouts went online in the early 2000s, but it wasn’t until after her second attempt in 2010 when she received the magic phone call notifying her that she was accepted.

“[Reading the almanac] sounds like a bizarre thing to do, but it’s really a condensed place for a whole lot of information like lists of presidents and Oscar winners,” Kennedy said.

Drawing on her experience in film studies, Kennedy also noted the logistics of the show: the surprisingly low-tech set, the amount of prep time before the filming and the requirement that all of the contestants appear the same height on television.

Kennedy continues to enjoy playing in pub quizzes here and will not forget her time on “Jeopardy!” when she goes abroad for the College’s joint program with St. Andrew’s.

“It was fun,” Kennedy said. “I’m really glad I did it, although I wish I would have won.