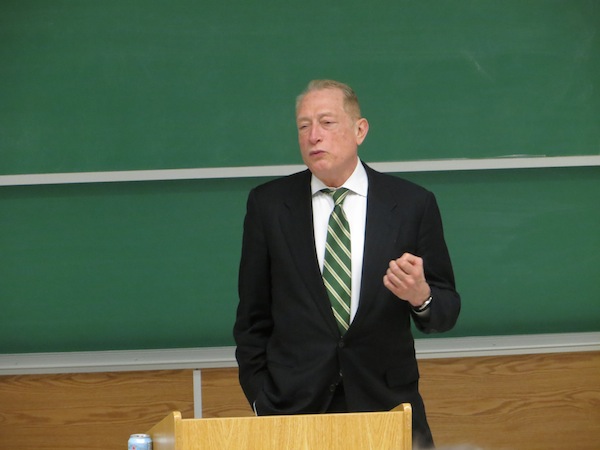 During his talk, Trammell touched on a number of issues related to LGBT rights on local, state and national levels.

After speaking, Trammell took questions from the audience. One student asked Trammel’s opinion on the best way to come out in a professional setting. Trammell responded by saying that in today’s increasingly accepting society, it’s best to explain one’s sexuality in an open and up-front manner.

Another student asked about Trammell’s time as a gay man at the College and as a player on the basketball team. Trammell said that though he did not come out to many people, he still felt welcomed and encouraged by those he did tell about his sexuality.

“Ever since Thomas Jefferson attended here, William and Mary has always been an institution with progressive ideas,” Trammell said. “It’s a huge privilege to be a part of and be involved in social change. … There’s no question we are going to be on the right side of history.”

Newly elected House of Delegates Senator and alum Monty Mason ’89, D-93, attended Trammell’s talk. Mason — who ran with an LGBT-rights platform this fall — defeated Republican Mike Watson in November, and has since supported a marriage equality agenda during the Virginia Legislature’s most recent session.

Mason said that he felt encouraged by the Legislature’s movement toward gay and transgender rights, which was most clearly evident in the new Attorney General Mark Herring’s refusal to support the state’s ban on same sex marriage.

“One of my favorite moments of the General Assembly this year was when Bob Marshall stood up on the floor and railed against the Attorney General and the opinion of the judge who supported same sex rights,” Mason said. “And then the next person who spoke was my colleague Rob Kapricka, who had 8 people in the gallery from Equality Virginia, and spoke in favor of rights for all gay, lesbian, and LGBT people. It was just great to see the juxtaposition of old and new ideas.”

Mason said that Trammel balanced optimism and realism with regards to the national progression towards equal treatment of gay and transgender rights in the United States’ legal codes.

“He did a great job of emphasizing how far we’ve come and how far we have to come,” Mason said. Regardless of that, it’s a very exciting time for equality issues.”

William and Larry, formed last year by Christian Bale ’14 M.P.P ’15, hopes to continue attracting speakers and building a presence on campus as an active, bipartisan advocate for LGBT issues during the spring semester.

Bale said the group plans to visit the Americans Civil Liberties Union of Virginia later in the semester to talk about the Bostic v. Rainey case, which found the prohibition against same-sex marriage unconstitutional in federal court.

Bale also said William and Larry will launch a new campaign called “If You Can Play, You Can Play,” which will focus on LGBT rights in relation to athletic teams. They hope to work in conjunction with the admissions office on the project.