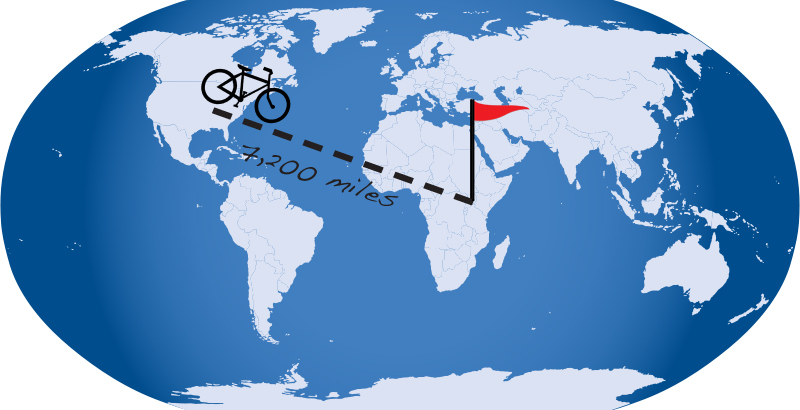 Next time you decide to ride your bicycle, you might as well build some schools in Uganda.

In December 2004, George Srour ’05 began a movement on the College of William and Mary campus that has rapidly grown into a non-profit organization with a presence on over 25 college campuses.

After spending time in Uganda, Srour returned to the College and experienced a “moment of obligation” — he could not ignore the education disparities in Uganda.

Srour’s first event was Christmas in Kampala, a fundraising campaign on campus that raised almost $45,000 toward the construction of a new school in Kampala.  Srour then received the Simon Fellowship for Noble Purpose, which enabled him to continue his efforts after graduation through Building Tomorrow.

Building Tomorrow harnesses the power of college students to raise money and awareness for primary school education issues in Uganda. As a result of over $600,000 raised by college students, 12 schools are now open, and an additional seven are planned or under construction.

To Katie Robinson ’14, Building Tomorrow stands out because it is empowering to everyone involved.

“I really love that the organization focuses on sustainability, and not just dropping foreign aid into a western country,” Robinson said. “Instead, it creates a partnership with the community and hands the school over to the community in the end.”

Every year, all Building Tomorrow chapters participate in an event called Bike to Uganda. During the event, participants symbolically try to bike the distance from their respective college to Kampala, Uganda, where the schools will be built.

“There’s not too much symbolism behind it; it’s just a fun challenge for students,” Robinson said.  “It’s cool to chart how far we’ve gone over the week. We equate one mile on the stationary bike to ten miles in real life, so the goal is a little more achievable.”

Eight stationary bikes will be set up in front of the Crim Dell, and anyone can sign up online for a 30-minute biking time slot. Students can sign up alone, or they can reserve a time block with their friends or organization. The event will run from Wednesday, April 2 to Friday, April 4 from 11 a.m. to 5 p.m.

The chapter hopes to raise $2,500 through this year’s Bike to Uganda event.

“We’ve been working over the past two years to raise enough money for a classroom, which is about $6,000,” Robinson said. “We’re hoping that in years to come, we’ll be able to reach that goal. It would be really cool to say that William and Mary Building Tomorrow chapter fundraised for a classroom in Uganda.”

Kelsey Glass ’14 organized a team because she feels passionately about Building Tomorrow’s mission.

“Where you were born in the world can predict a lot about your future, but it shouldn’t affect if you are able to go to school or not,” Glass said. “Education can open so many opportunities for not only the student, but the rest of their family and community as well. When education is available, economic opportunities flourish and students can become positive influences within their community, creating a new generation of educated individuals. I am a strong believer in equal access to education and I hope that by supporting Building Tomorrow I can help positively impact the life of a Ugandan student.”

There may be a variety of ways to help improve lives in Uganda, but Robinson believes that improving access to education is the most crucial of all.

“Primary education is one of the millennium development goals, and it’s that for a reason,” Robinson said.  “Education is connected to so many different things.  Putting a primary age student through primary school will have so many positive effects down the road, whether it’s gender equality, whether it’s addressing environmental issues, and in general, education is the key to a lot of the development issues that Africa in particular is facing.”