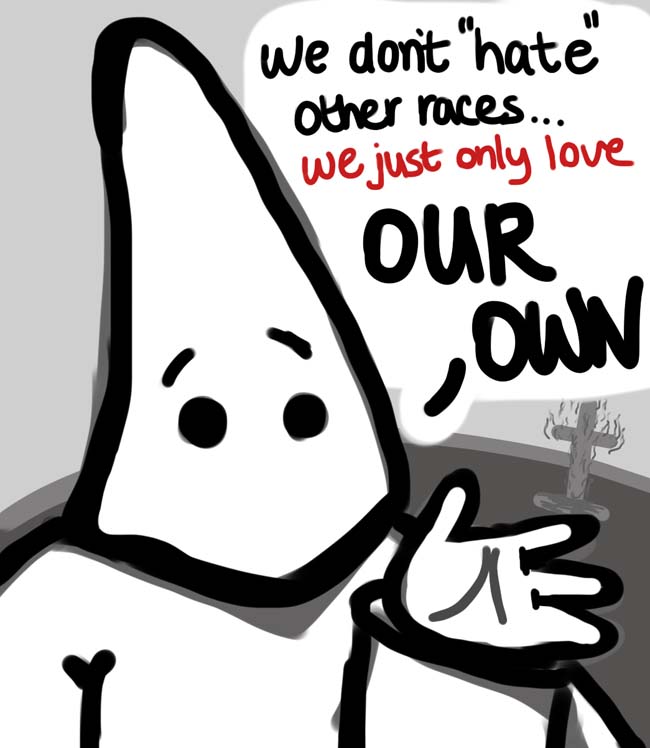 We are gathered here today to talk about a flagpole.

It was first seen in 1926, and it was a gift to the College of William and Mary by the Ku Klux Klan. You are, no doubt, familiar with them. Two weeks ago, they claimed to not be a hate group.

In a telephone interview, Klansman Frank Ancona told Virginia television station NBC-12, “We don’t hate people because of their race.” Ancona is the Imperial Wizard of the Traditionalist American Knights of the Ku Klux Klan. He also declared, “We are a Christian organization.”

Lord help us all.

With what was presumably a straight face, he continued: “Because of the act of a few rogue Klansmen, all Klansmen are supposed to be murderers, and wanting to lynch black people, and we’re supposed to be terrorists. That’s a complete falsehood.”

Unfortunately, this is no laughing matter. General Klan membership has increased significantly in the past six years, during which Ancona has been heavily involved with what he swears are not rebranding efforts. In his particular chapter, membership has nearly tripled.

The Klan has been trying to hide its true colors for years, at least since former Grand Wizard David Duke ran for office in Louisiana in the 1980s. This sort of thing is nothing new. Where do I even begin? I could quote official Klan materials referring to any race but white as “mongrel” and “inferior.” Or maybe I should let Ancona dig his own grave: “We want to keep our race the white race. We want to stay white. It’s not a hateful thing to want to maintain white supremacy.”

Then you have the website of Ancona’s Klan chapter, which states their support for the Constitution “as it was originally written.” That darned thirteenth amendment.

Or not. In February, a former Klan leader in Alabama pled guilty to obstruction of justice and burning a cross. In Louisiana, eight days after President Obama was elected to his first term, Klan leader Raymond Foster killed a woman for changing her mind about joining. The woman, Cynthia Lynch, is reported to have cried, “I want to go home! I’ve had enough of this! I want to quit! I want out now!” She was shot in the head. She was bipolar and off medication at the time.

The Klan’s official website defines a Christian as “a man or woman who believes in and follows the teachings of Jesus Christ.” Using that definition, its members are no more Christian than Fred Phelps.

Jesus, as chronicled in the Bible, at one point tells his disciples, “A new commandment I give unto you, That ye love one another; as I have loved you, that ye also love one another. By this shall all men know that ye are my disciples, if ye have love one to another” (John 13:34-35 KJV). Hatred isn’t love.

In 1926, the College accepted that flagpole to avoid a political firestorm. It was initially installed at Confusion Corner. It was moved near Blair Hall around 1959, and later spent time at the Marshall-Wythe School of Law. Its whereabouts today are unknown.

We need to find it. And we need to give it back.