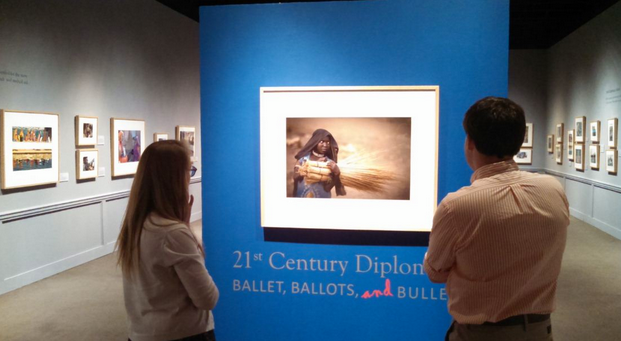 On the second floor of the Muscarelle Museum of Art at the College of William and Mary, there is a softly lit, gray gallery. Striking photographs belt the perimeter of the room’s walls and cleverly alliterative words direct attention to collections of images. The exhibition on hand is “21st Century Diplomacy: Ballet, Ballots and Bullets.” This display — curated by Kathryn H. Floyd, a visiting professor in the College’s government department — aims to showcase the cohesive modern methods of international relations through the raw, visual stimulation that photographs have the power to exude.

“The curating process was driven by a desire to show that diplomacy is much more nuanced than negotiations between two senior government representatives,” Floyd said in an email. “Diplomacy is art and culture, voting and the forces that drive conflict.”

The three subsections of the exhibit represent integral aspects of human life. “Ballet” emulates the creative spirit, cultural traditions and artistic expressions that span across borders. Images in this section range from black and white images of passionate ballerinas training in Argentina and Russia to Nepalese citizens learning how to program computer software for the first time.

“Ballots” encompasses the governmental side of international societies. These photographs tell stories of bureaucratic aggression, struggles for suffrage and satirical political protests. The chaotic, spray-painted colors of a vandalized car in Istanbul come to life in an image taken by Aamina Shaikh ’14. The inclusion of Shaikh’s work in the exhibition, as well as other former and current students’ (Sara Rock ’14 and Carleigh Snead ’15) is what the staff at the Muscarelle and Floyd hope will draw other members of the Tribe to view this pivotal parade of pictures.

The Muscarelle’s Assistant Director and Chief Curator John Spike is very eager to spread the message of “Ballet, Ballots and Bullets” to the College’s student body.

“These photos are journalistic, which makes them contemporary and very relevant,” Spike said. “Since the safety of journalists and photojournalists has unfortunately become one of the hottest issues in the news lately, it is important to try to convey facts to our viewers that they may not have known otherwise.”

“It allows our visitors to assume the role of photojournalist, traveling the globe to document conflicts and events shaping our current political, social and economic climate,” she said. “These fascinating images glimpse into the lives of individuals in conflicts zones struggling to maintain their cultural traditions and a sense of normalcy in their daily lives. “

Perhaps the most visceral section of the three is “Bullets.” The exhibition’s east wall is swathed with images of hard diplomacy: war-torn lands, candlelit vigils for victims of civil violence and rugged refugee camps.

“After contemplating the angle for the exhibit, I wanted to push the limits of contemporary perceptions of diplomacy,” Floyd said. “For ‘Bullets,’ I included the war in Iraq and the looming water crisis across the globe.”

Floyd makes it clear that although some of the issues the photographs portray are covered by the media, seeing them in tandem with varying forms of global interaction allows for better perspective, particularly for young adults.

“One reason why this exhibit belongs at the Muscarelle is that it shares the various real-world dimensions of diplomacy with students and the community. I am a firm believer that students are some of the best ambassadors as they study and work abroad,” Floyd said.

“Ballet, Ballots and Bullets” is presented at the Muscarelle through a partnership with the Diplomatic Courier, a global affairs magazine based out of Washington D.C. The publication’s access to world-renowned photojournalists allows student work to be showcased alongside the work of professionally established artists. Additionally, the Muscarelle will offer a public panel discussion about the photographs Sept. 2. Moderated by Dr. Harvey Langholtz, a psychology professor at the College who specializes in international relations, the panel will include Ana Carcani Rold, founder, publisher and editor-in-chief of Diplomatic Courier; international photojournalist and featured artist Sebastian Rich; Kathryn H. Floyd and Carleigh Snead ’15.

Students are encouraged to view the exhibition before its last day at the Muscarelle, Sept. 28. Anyone with a College ID receives free admission and access to all nine of the museum’s current collections. The hope is that the featured images will stir viewers’ emotions and get them thinking about the importance of human relations.

“The photographs in 21st Century Diplomacy show what some students might encounter as they begin their careers, or what they may have already seen in their travels,” Floyd said. “‘Ballet, Ballots and Bullets’ illuminates the opportunities, challenges and resilience of the world our students are inheriting.”