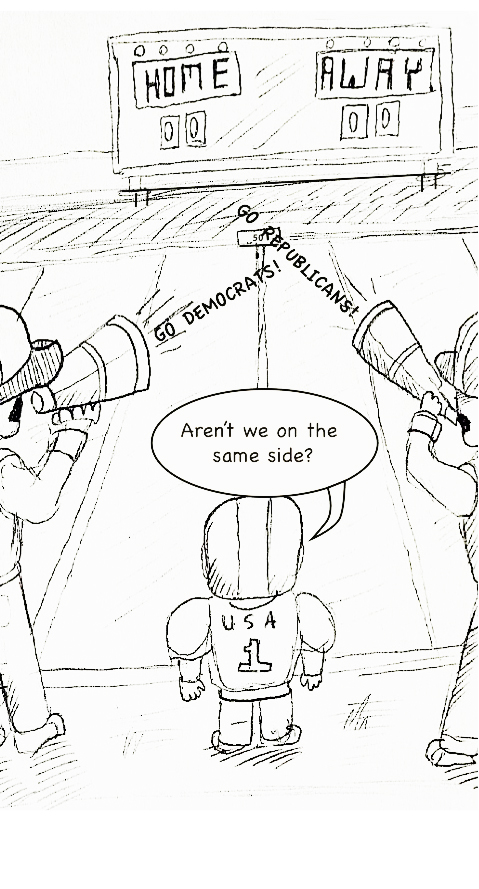 In every news source, you’ll find someone declaring that our country is a hopelessly divided nation and all compromise is impossible. To which I say, well, not with that attitude.

It’s true that there are many political issues that are unlikely to be resolved soon. Sometimes, in deadlocked subjects such as abortion, we have to agree to disagree. But the problem is not that citizens disagree about a variety of topics, the true failure that led to this “divided nation” is the inability to have productive debates.

In our YouTube-comments culture, it has become ubiquitous that political arguments are just about volume, likes, follows, who is louder, and who’s better at insulting the other side. 140 characters and a cloud of dust. But the future of political debate isn’t so dismal, as long as we take responsibility to change the culture.

Taking this common-ground approach to create more productive debate means recognizing the good intentions of the opposite side. Disagreeing with someone is not a personal insult. It means listening carefully and patiently to their points, calmly expressing your side, and always showing respect for their opinion. And I mean actually respecting their viewpoint; respect isn’t merely waiting to explode into expletives. Diversity makes America a stronger nation, which includes diversity of opinion. Remember that people have different backgrounds and perspectives; they deserve respect, not a condescending attitude or a dismissive “check your privilege.”

Save the strong language for when it’s required. Labeling someone who opposes NSA surveillance a terrorist, or denouncing someone who disagrees with affirmative action policies as a racist — such proclamations poison debate and render compromise unattainable. Most importantly, overuse of extreme terms trivializes the true terrorists bombing subways in England, or the real racists proclaiming “Hitler was Right” regarding the Gaza conflict. Those actions were and are abominable, and merit strong terms.

Want to know the awesome part about civilized debate? It can change your opinion. What if, instead of calling the person against NSA a terrorist, you told them that the NSA cannot access the content of a phone call without a warrant? You might make them think. They might even say, “Huh, well maybe the NSA isn’t all bad.” Or what if you showed the person against affirmative action, in lieu of calling them a racist, a series of articles showing how affirmative action provided impoverished students with their first opportunity to succeed? They might see some of the policy’s positives. Sure, they probably won’t do an about-face on the issue, but it opens the door to compromise.

With some common ground, mutual respect, and a couple rules of engagement, I feel confident our campus will become a dynamic center of informed political debate. My hope is that this column will serve as a bipartisan reminder that there are always middle-ground issues on which we can agree. And maybe we’ll find a way to tie together this divided nation and reach across the aisle.