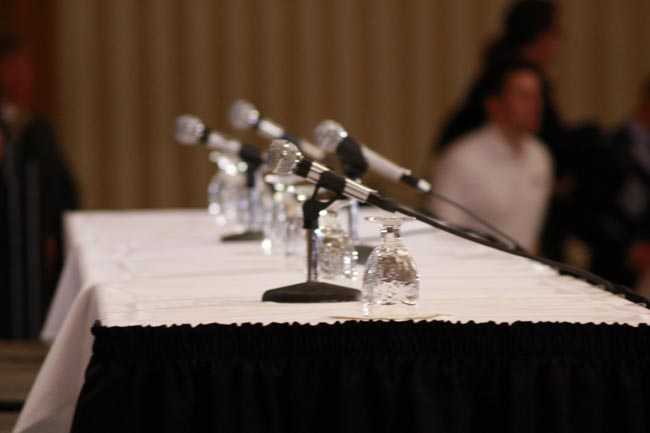 You are about as likely to find candidates reaching bipartisan solutions in an election-year debate as you are to find an available Earl Gregg Swem Library study room during midterm week. However, while bipartisanship seems hard to pinpoint, it’s still kicking in the 1st district.

The Williamsburg chapter of the League of Women Voters hosted a debate Oct. 8 at the Williamsburg Library between candidates for the 1st Congressional District of Virginia. The debate featured incumbent Republican Robert Wittman, Democratic candidate Norman Mosher and Gail Parker of the Green Party. As Parker unintentionally provided comic relief for all in attendance with her undying addiction to high-speed rail (even answering a question about ISIS with a train promotion), my focus will be on the serious candidates.

Mosher and Wittman essentially hold the standard views associated with their respective parties on issues such as climate change, healthcare and immigration — none of which I will address here, as drawing a bipartisan solution for all those topics in a single article would be semi-miraculous. However, I was able to ask the candidates what issue(s) they see as having the greatest chance of being resolved with a bipartisan solution.

When Wittman began with “improving America,” I began preparations to roll my eyes and sigh in exasperation, but to his credit, he did arrive at something substantial.

“Let’s do what we can to improve our country’s finances, like the Simpson-Bowles Commision,” he said, referring to a bipartisan federal budgeting commission tasked with lowering debt. “I don’t like everything in there, but it’s a great place to start. Let’s reform our tax code by simplifying it. Throw the old version away, close loopholes and lower rates. It’s common sense.”

As even President Obama has recommended lowering our corporate tax rate, Wittman is right on point.

Mosher added, “It’s the small businesses paying the 35 percent rate … we have to close these loopholes so it’s not about who has a bigger ant army of lawyers.”

Mosher’s turn began on an odd note but, like Wittman’s, became coherent.

“Rejoice, the deficit has dropped like a stone,” he said. “It was at 9.8 billion and now it has fallen to 2.7 billion. With a rise in GDP, it will continue to fall.”

It should be noted that Mosher was referring to the annual deficit dropping, not the national overall deficit. However, Mosher is absolutely correct in pointing to a reduction of deficit spending as a bipartisan victory. This is a marked improvement over the last time I asked Mosher my question; in a Young Democrats meeting, he answered with “small things” and then talked about President John F. Kennedy.

Though it was in another answer, Mosher also indicated that the redistricting process needs to become far more bipartisan. This message was emphasized by the recent news that the 3rd District was declared unconstitutional. There’s no denying it — gerrymandering is alive and well in Virginia. For example, the 1st district encompasses parts of Newport News and Manassas. The 8th looks like a seahorse.

Mosher suggested appointing a civilian board, but Wittman would rather have the General Assembly decide to appoint or not appoint a districting board. Wittman agreed that the process needs to be evaluated, but considering that Virginia has historically had a Republican General Assembly, it doesn’t seem to be at the top of the Republican agenda. However, with Mosher’s suggestion comes the complication that those civilians wouldn’t be elected, and thus would be not accountable.

It is fortunate that Wittman and Mosher can’t hold office at the same time, as that was the extent of issues upon which they sort of agreed. Wittman’s perspective on tax code reform and Mosher’s views on redistricting give some reason for optimism. Also, Wittman’s joint efforts with Warner on the Chesapeake Bay deserve credit, while Mosher doesn’t have a voting record at which to point, and thus is at a slight disadvantage.

Hopefully, the flashes of bipartisanship will carry through to November, and then to Congress, regardless of who wins the election.