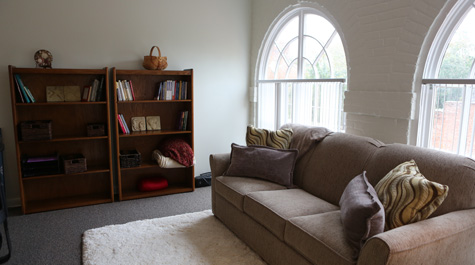 The Haven, a new on-campus resource for students learning about and recovering from sexual assault and relational abuse, will open today at the College of William and Mary.

In the newly-created space, students can learn how to access the resources offered on and off campus for survivors of sexual assault or abuse. The Haven will also operate as a safe space in which students can discuss their journeys toward healing.

Care Support Services and the student advisory board to The Haven created the space with support from Dean Marjorie Thomas, Vice President for Student Affairs Ginger Ambler ’88 Ph.D. ’06 and College President Taylor Reveley.

Co-chair to The Haven Mallory Tucker ’15 said the idea was inspired by a conversation she had with Senior Assistant Dean of Students Donna Haygood-Jackson, who is now director of the organization.

“We started talking about a desire for some sort of safe place … on campus that students would go to not just for sexual assault response but also for the wide array of questions that come with all issues surrounding relational abuse,” Tucker said.

Tucker said the conversation turned into regular meetings about the idea to create a safe space on campus.

“We worked for a year and talked to administrators,” Tucker said. “Over the summer, the administration did a lot of work on revising and reviewing our policies and procedures and sources related to sexual assault and sexual misconduct, and decided to go ahead and give us the space. This center grew out of a desire to have a space where students could deal with issues surrounding sexual misconduct, sexual assault, harassment, stalking, unhealthy relationships, those issues, where they have a place to go to get information and start a recording process, [get] referrals to other campus offices and also have a place where they can go if they are feeling alone.”

Tucker described The Haven as a place where students have an opportunity for open and private reflection, learning, discussion and exploration. Haygood-Jackson suggested that students de-stress through journaling, reflection and coloring in coloring books .

“We like to think of ourselves as a first step of [various] degrees. We open doors for what they need,” Haygood-Jackson said. “And what they need may be a place where they can journal and reflect or talk to a volunteer.”

Tucker said that volunteers are trained in peer health education, crisis intervention and advocacy. They are also expected to be knowledgeable about on-campus resources and policies. She emphasized the fact that personality traits like empathy and caring were major factors in the volunteer selection process.

“Every student that walks through the door will be greeted by a student volunteer who will introduce themselves, say hello, [and] make sure they are aware that we are there for any questions or any information … Then we will sort of let them direct their visit from that point on,” Tucker said.

Tucker has previously worked as a peer outreach educator and an RA. Despite her experiences, she said she felt she still did not have a full understanding of all of the resources on campus and their policies.

“I realized that despite all of the training that I had received from the work I was doing, I didn’t feel competent in my understanding of our school’s policies,” Tucker said. “I knew that you could go here and report to here but I didn’t feel competent in what that actually meant. What actually happens to a student? What kind of attitudes are they actually going to encounter?  I found that concerning, that despite the training that I received I still didn’t feel I could really confidently guide students through the process.”

Tucker said she also feels a certain stigma sometimes surrounds various reporting options; that stigma is perpetuated through conversations on social networks and by other sources.

“There’s been debates about the Counseling Center and its effectiveness,” Tucker said. “There have been concerns about, ‘If I go to the dean of students, will I be supported confidentially, or are they going to try to kick me out of school? Are they going to try to hide this away? If I go to student health, what does that mean?’ That’s not to say that any of those thoughts are valid or not valid; however, I wanted a place where students could go that was fresh and free from those sort of pre-conceived notions.”

The Haven is also a place to educate students about the realities of the College’s policies and to gather students’ feedback on what needs to change about those policies, Tucker said. She said she hopes students can come to The Haven and subsequently feel the College’s environment and culture are more understandable and easier to navigate.

The Haven’s advising board member Brittney Harrington ’15 said she believes that above all else, The Haven offers a place for students to feel safe.

“For a campus to really be on the side of survivors, it needs to have more than formal reporting mechanisms in place,” Harrington said. “For many reasons, survivors do not feel safe relying on the system to be the support they need. The Haven is a space where people can go to get support and information without ever being pressured to report or identify themselves.”

Co-chair of The Haven Hannah Boes ’14 said she is excited by The Haven’s uniqueness.

“I am thrilled about The Haven simply because it is the first resource of its kind here,” Boes said. “This center wholly empowers all community members — not just active students and staff — to build the space they need at William and Mary.”

According to Tucker, The Haven’s message to students is simple.

“No matter what you need, you are not alone,” she said.