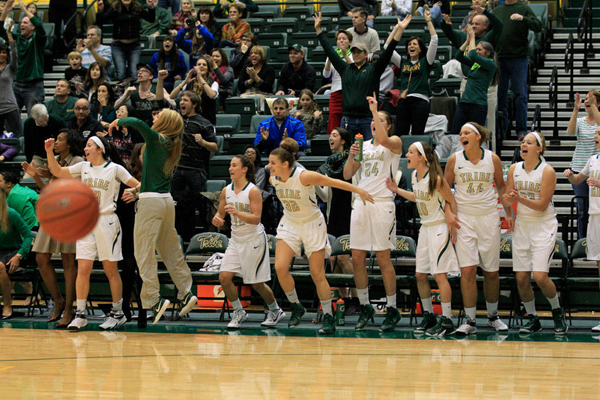 Friday evening in Kaplan Arena, a crowd of 566 watched sophomore guard Latrice Hunter race down the court for a game-winning layup for William and Mary. With that last-second shot, the Tribe began its season with an exciting 72-71 victory over Loyola.

The College (1-0) led Loyola (0-1) through the first 17 minutes of the game. The Greyhounds played tight defense, forcing as many turnovers as the Tribe. This allowed Loyola to go on a seven-point run, in which the Tribe suffered five turnovers in 48 seconds.

With three minutes remaining in the half, another Loyola seven-point run secured a 30-29 advantage, their first lead of the game. The Tribe reclaimed the lead with a jumper from freshman center Abby Rendle, but Loyola scored as the first half expired, putting the College down 33-32 at halftime.

With 12 seconds and one Tribe timeout remaining, sophomore forward Alexandra Masaquel grabbed the free throw rebound and passed to Hunter, who sliced up the court, drove the lane and flew to the basket for the game-winning lay-up with four seconds remaining.

The Tribe started the second half on the attack, as senior forward Jazmen Boone scored a basket 13 seconds after the break. The College’s offense was increasingly aggressive with quick, precise passing and improved ball security. Loyola enjoyed a six-point run four minutes into the half, but the Tribe immediately countered with a seven-point run to take a 47-43 lead. Over the next nine minutes, the teams exchanged points and turnovers, but the College took the lead, 67-58, with six minutes remaining.

The Greyhounds then mounted a comeback bid with a 13-1 run, powering Loyola to a 71-68 lead with two minutes remaining. Sophomore guard Marlena Tremba made two free throws to cut the Greyhound lead to 71-70, and Loyola responded by missing two free throws. With 12 seconds and one Tribe timeout remaining, sophomore forward Alexandra Masaquel grabbed the free throw rebound and passed to Hunter, who sliced up the court, drove the lane and flew to the basket for the game-winning lay-up with four seconds remaining.

Head coach Ed Swanson discussed his decision not to use his last timeout.

“Sometimes when you call a timeout, you give that other coach the opportunity to do something different,” Swanson said. “If I called a timeout, they come out and surprise Latrice … now Latrice is trapped with the ball, so sometimes disorganization in that situation is better than organization.”

The Tribe hit 27 of 51 field goal attempts, and sophomore forward Kasey Curtis led the team with a career-high 16 points. After the Tribe’s first half passing struggles, the second half saw the College repeatedly cut through Loyola’s defense. However, the Tribe surrendered 27 turnovers. Given that this was the College’s first game, Swanson said adjustments for the season are yet to come.

“We struggled and turned the ball over too much, we were just very jittery. Having been around this team and watching what they’re capable of is where the disappointment is with the turnovers,” Swanson said. “I think we are going to be better as we move on through the year. We are going to improve, not only individually, but as a team and be a little more poised in game.”

Defensively, the Tribe defense used wider coverage to control the court and force turnovers. The strategy yielded six blocks and nine steals for the College, as well as 30 defensive rebounds. The Tribe dominated the boards with 41 total rebounds to Loyola’s 26. Swanson commented on the improvement to the rebounding from last season.

“From last year to this year, that’s what we’ve been concentrating on the rebounding. We dominated the glass, so we’ll continue to make strong progress throughout the year,” Swanson said.

“Last year I didn’t get the outcome I wanted, so I told myself, ‘You’ve got to work hard if you want it, you can’t let anyone get in your way of the goals that you want and your aspirations,’” Masaquel said. “I made it a goal … [Swanson] had been preaching rebounding … so I focused on that one thing and the rest fell into place.”