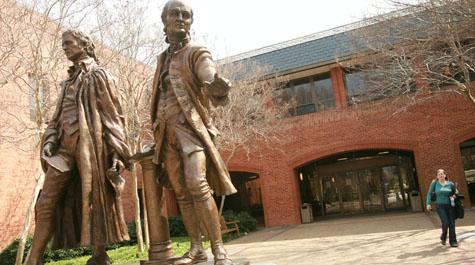 The Department of Justice’s Office on Violence Against Women gave the Marshall Wythe School of Law’s Domestic Violence Clinic a $250,000 two-year grant to expand its reach earlier this month. The clinic offers legal services to victims of domestic violence and sexual assault throughout southeast Virginia, a region home to more than 500,000 people.

The grant will give third-year law students who work in the clinic experience handling sexual assault cases. Patricia Roberts, the director of the law school’s clinical programs, elaborated on how the Domestic Violence Clinic will use the grant money from OVW.

“We will be hiring a full-time attorney who will work as a fellow with Darryl Cunningham,” Roberts said.

Darryl Cunningham, the instructor of the Domestic Violence Clinic, detailed many of the additional problems that victims of domestic violence and sexual assault face. The grant will enable the clinic to help victims solve these problems.

“Often when people are getting out of a bad relationship or have been abused, there are also housing issues, job issues, [and] credit issues. Abusers often will control all of the money — or, as an alternative, they will get credit cards out in the victim’s name, run up massive bills and then not pay those bills — so they have no credit, so they can’t get an apartment, they can’t get a car,” Cunningham said. “They [also] have transportation issues, medical issues, and custody issues. So there’s a lot of legal and non-legal needs that they have, so what we’re hoping to get as many of those needs as possible met or find referrals for other attorneys or outside sources.”

In addition to supplementing Cunningham’s expertise with a new attorney to address those problems, the Domestic Violence Clinic will work with several organizations at the College of William and Mary and in the Williamsburg community to achieve its goals.

“The law school and its clinics are partnering with Legal Aid [Society for South Eastern Virginia] and Avalon, a local domestic violence shelter, and we will be providing expanded legal services to [southeastern Virginia],” Roberts said.

The clinic will also partner with the College’s Initiative on Gender, Sexuality, & the Law and the College’s Family Law Clinic to broaden its reach.

Director of Outreach Services at Avalon Juanita Graham assists the Domestic Violence Clinic in directing victims to the clinic for legal services, in housing and counseling victims, and in educating the public. Graham discussed the work she does with the Avalon Center.

The law school will host an education session in January. While undergraduate students cannot volunteer at the law clinics, Graham said that Avalon offers many opportunities for students to help victims of domestic violence. If students are interested, she said that Avalon may later establish a program for undergraduate students, which will instruct them on how to educate others on sexual assault and healthy relationships.