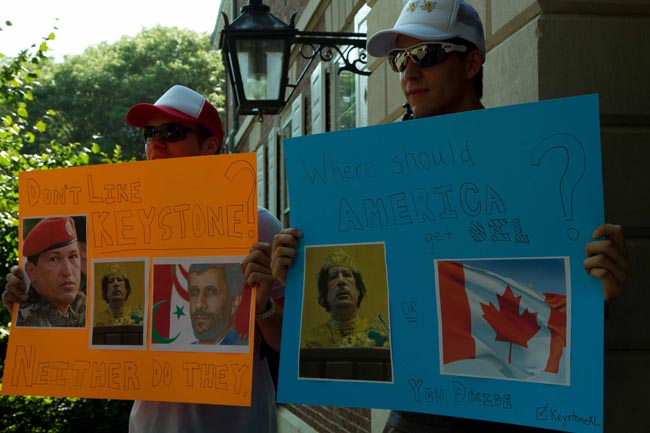 In response to a recent Flat Hat column concerning the Keystone XL pipeline, I think it’s important to consider why as many as 14 Senate Democrats supported the bill along with all 45 Republicans, which, considering the polarized political environment of today, is quite the display of bipartisanship. The reason is simple. Keystone XL just makes sense.

Among the reasons cited against the pipeline was the environmental impact of developing tar sands. It’s true, developing tar sands can release carbon dioxide emissions, although only three times that of conventional oil as opposed to the 17 times cited in the article.

However, this isn’t a case of “yes” or “no” to developing tar sands. Canada is going to do it regardless of what the United States does. “With the pressure to avoid a decision that is such a no brainer, it’s all the more reason Canada should be looking towards trade diversification and particularly diversification of energy exports,” said the Canadian Prime Minister in September. Translation: This oil is getting developed whether Keystone is built or not.

If we don’t approve this project, then Canada will find other buyers. And not just this one time either. Canada stands only behind Saudi Arabia and Venezuela for most proven oil reserves worldwide, thus a refusal of Keystone now could be a detriment to Canadian-American energy business in the future. That’s a lot of business to turn down.  And frankly, America’s not the only game in town.

Consider the Enbridge Northern Gateway Pipeline. This pipeline proposal, put off for years since Keystone provided the better option, has regained new significance in the wake of the Keystone controversy  (which has been pigeonholed by the current administration for the past six years. The Senate was only allowed to vote upon the project this month.) The Northern Gateway Pipeline runs from Bruderheim to British Columbia. This is on the west coast of Canada, meaning the oil from tar sands could be shipped straight to, you guessed it, China.

Where would that leave the United States? Roughly 42,000 jobs behind, according to the State Department. To top it off, the environmental impact of that pipeline could be even worse. Pipelines actually have the best track record of transportation of oil. The other options, trains and tankers, have accidents far more frequently. The Washington Post reports that four times as much oil was spilled from trains this year as opposed to the previous four decades. More in 365 days, than in 40 years. If SEAC protested oil transportation by rail, I’d support that in a heartbeat.

Finally, the State Department review of the project has ruled that the construction and operation of pipeline in the US will have “little to no environmental impact.” It even states that there would be “greater safety and environmental risks from not building the pipeline.”

With the country facing economic troubles including near-record lows in the labor-participation rate, this project has rightly received bipartisan support from Virginia Senator Mark Warner (D) and other senators. Environmental concerns regarding tar sands are certainly legitimate, but these resources are going to be developed by Canada whether we like it or not. It is irresponsible to deny the American people good jobs in a time of economic hardship for a common-sense project which reduces the risk of oil accidents. From a bipartisan perspective, we need Keystone XL.