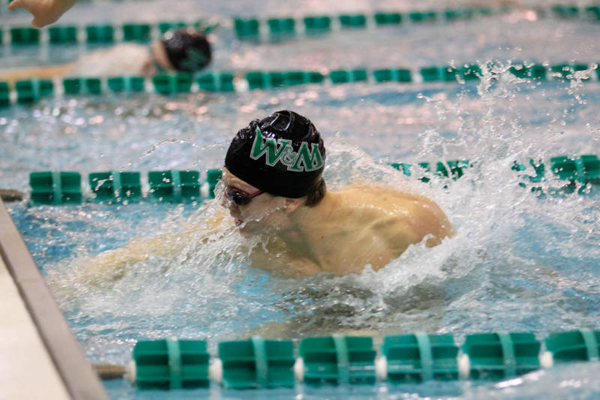 William and Mary defeated Old Dominion Saturday, as both the men and women cruised to victories that extended their winning streaks.

The women rise to 7-3 overall and 2-2 in the Colonial Athletic Conference with their fourth straight road victory, 166-122. The men extended their winning streak to five consecutive meets and improved to 6-2 overall (2-1 CAA) with a 161-133 decision.

The men’s team set two dual-meet records, as junior Jeremiah O’Donnell reset his own duel-meet record in the 400-meter at 4 minutes and 2 seconds. O’Donnell also won the 100-meter breast at 56.56, good for eighth all-time in school history.

The College set the other dual-meet record by virtue of the 400-meter free relay — a team composed of senior Taegen Clark, junior Will Manion, sophomore Joe Eiden and junior Billy Russell. The four won the event with a time of 3:03.91, marking the 13th-fastest time in team history.

Manion and Eiden had yet another event to compete in, the 200-meter medley, in which they joined senior Matt Goetz and freshman Brett Barden. Rather than tiring after the 400-meter relay performance, Manion and Eiden bookended the second relay en route to a 1:32.13 time, good enough for the 12th-fastest race in Tribe history.

The women rise to 7-3 overall and 2-2 in the Colonial Athletic Conference with their fourth straight road victory, 166-122. The men extended their winning streak to five consecutive meets and improved to 6-2 overall (2-1 CAA) with a 161-133 decision.

The women’s squad swept the board in relays, setting a dual-meet record in the process. Sophomore Jaimie Miller, junior Noelle Klockner, junior Jessie Ustjanauskas and senior Megan Howard formed the team that set the 400-meter free relay school record at 3:28.65. Freshman Annie Valls switched in for Miller on the 200-meter medley relay, in which the College set the 14th-fastest time in school history with a 1:44.60 mark.

Up next is a dual matchup against East Carolina in Williamsburg at 12 p.m. Saturday.