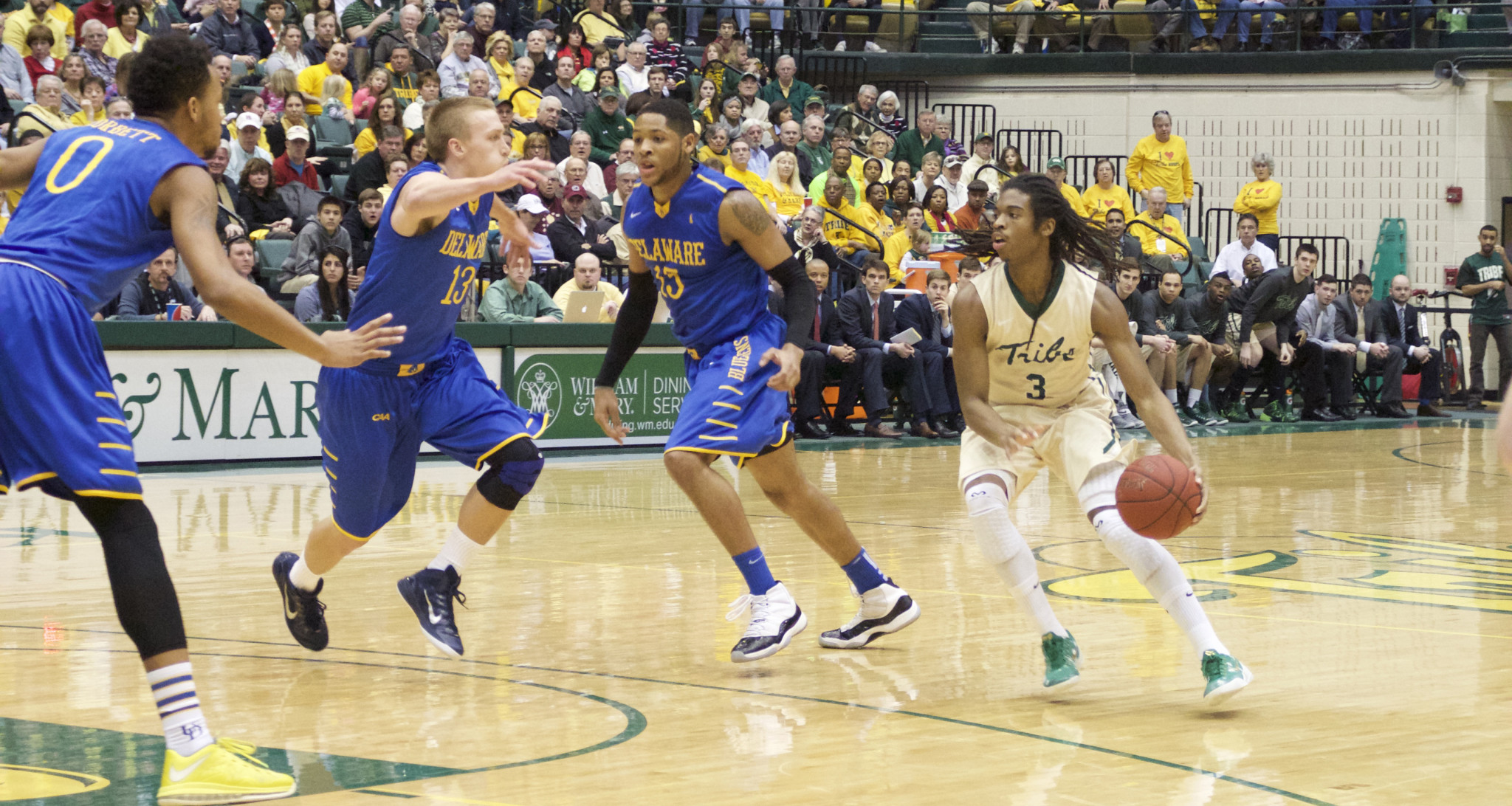 Senior guard Marcus Thornton tore down the court, weaving through a swarm of Delaware defenders. William and Mary trailed Delaware by three points with just nine seconds remaining, and Thornton was desperately seeking an open three-point jumper. He nearly lost the ball in a crowd of defenders on the left sideline, sliced to his right, set his feet, and fired a contested prayer of a triple just before the buzzer.

The loss was the College’s first at home this season and its ninth in a row to Delaware (7-18, 6-8 CAA). The Tribe trailed by double digits for most of the first half and never led the Blue Hens. The College was down 43-28 following Delaware’s sharp first half, but clawed its way back into the game with a fierce second half rally. Ultimately, the College fell just short of the comeback victory.

“Disappointing loss for us, no doubt about it,” head coach Tony Shaver said. “Delaware played really well, they shot the ball well, and they played with poise I thought, tonight. I think our downfall was the first half defensively, not playing at the level of intensity we needed.”

Thornton led the College with 27 points on 11 of 21 shooting, with 18 points coming after halftime. Sophomore forward Omar Prewitt chipped in with 25 points and four rebounds, and junior guard Terry Tarpey added nine points, eight rebounds and three steals. Otherwise, however, the College struggled offensively — the six other players tallied nine points total, and three of the Tribe’s reserves failed to score.

Delaware had the Tribe reeling from the start, hitting eight of its first 12 shots and using a 10-2 scoring run to sprint to a 20-9 lead seven minutes into the game. Delaware extended its lead in a first half that became nightmarish for the College — the Blue Hens hit 59 percent of their shots and 55 percent of their threes, and held the College at 28 points, building a 43-28 advantage before intermission.

“The first half definitely hurt us,” Thornton said. “I wouldn’t say we lost the entire game there, but it’s definitely hard to play from behind, so that had something to do with it.”

However, the Tribe came out firing after halftime. Thornton, Prewitt and Tarpey scored the College’s first 16 points to close Delaware’s lead to 48-44 with 15 minutes remaining. The Tribe continued to pressure Delaware, but each time the College seemed poised to take the lead, Delaware hit a timely shot to protect its advantage. The College finally drew even when Prewitt hit a free throw to tie the score at 55, but Delaware’s Kory Holden quickly fired a three-pointer to make the score 58-55 with eight minutes remaining.

Each time the College seemed poised to take the lead, Delaware hit a timely shot to protect its advantage.

The College tied the score at 60 on senior forward Tom Schalk’s layup and again at 62 after two Tarpey free throws, but the Blue Hens scored on their next four possessions to take a 70-65 lead with just under two minutes to play. The College closed the gap to 70-68 with three free throws, but with only 15 seconds remaining, the Tribe was forced to foul. Thornton answered two Delaware free throws with a quick layup to make the score 72-70 with nine seconds to go, and the College sent the Blue Hens to the line again with a chance to secure the game.

Delaware’s Holden hit the first free throw but missed the second, setting up Thornton’s eleventh hour effort to send the game to overtime with a three-pointer. However, Thornton’s fevered possession ended with a miss and the buzzer signaled the Tribe’s loss at the hands of the Blue Hens, 73-70.

All told, the College hit 41 percent of its shots, sank 30 percent of its threes, and only scored 18 points in the paint. Notably, the Tribe was without injured sophomore guard Daniel Dixon, who averages 11.1 points per game and shoots 46 percent from beyond the arc. It is unclear when Dixon will return.

“We certainly want [Dixon] back; you can’t lose one of your best players without being affected by it,” Shaver said. “Wednesday night the guys who replaced him played well, but tonight we really didn’t get much out of that committee, as I called it.”

The Tribe looks to rally from this loss Wednesday, when it travels to Boston to take on Northeastern. The Huskies are a game behind the first-place Tribe in the Colonial Athletic Association standings, so Wednesday’s game will have ample implications for the upcoming conference tournament. Tip-off is set for 7 p.m.