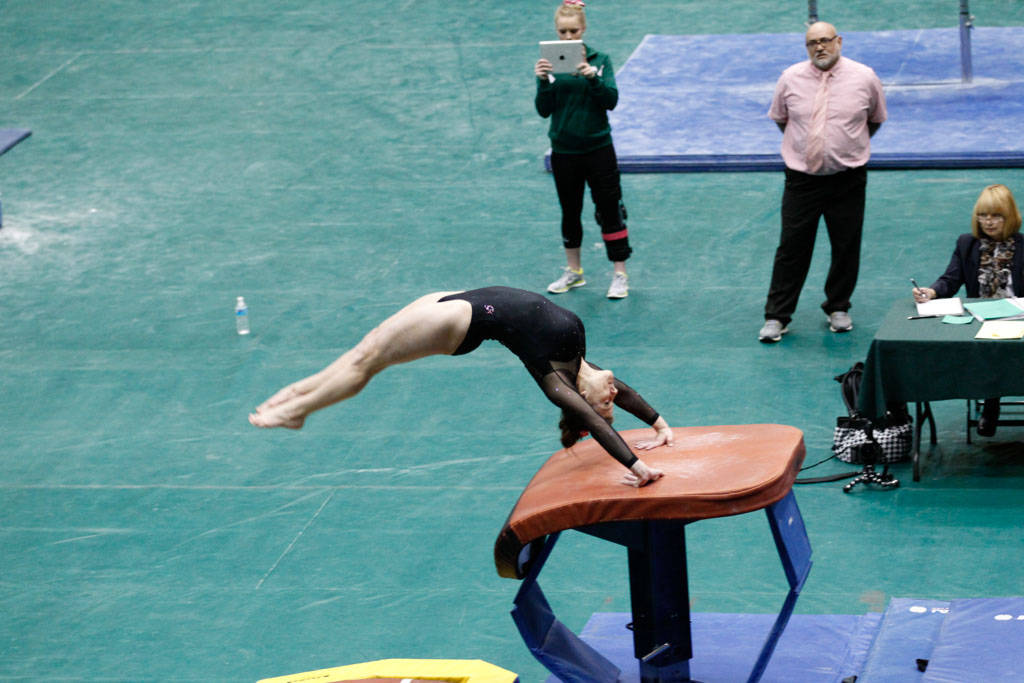 After recently earning a No.15 national ranking, the men’s squad defeated No.13 Navy by a slim margin of 410.9 to 407.6 in a dual-meet at Kaplan Arena Saturday. The Tribe racked up its second-highest total score of the season, including season-bests in three of the four events.

Leading the way for the Tribe, junior Neal Courter won the vault with a mark of 14.8, and claimed the highest score on the high-bar at 14.25 titles. Courter’s efforts pushed the College over the season-high for the vault as the team registered a 71.85 in the event. Nick Van Dyke claimed the second-highest tally with 14.65, matching his career high.

While the other events were closely contested, the Tribe distanced itself from Navy on the pommel horse, taking the top five scores in the dominating performance en route to the squad’s highest mark of the season, a 69.8. Senior Peter Ten Eyck notched the highest tally at 14.5, while juniors Keaton Ackerman and Simon Casey added scores of 14.05 and 14.0 respectively to the Tribe total.

Ten Eyck continued to impress on the rings, where he and sophomore Rob Myer notched career-high scores of 13.9 and 13.85 respectively, propelling the College to another season-high at 67.8.

Though the Midshipmen claimed the winning score on parallel bars, Myer kept the Tribe competitive with a 14.0 mark, good enough for second-place in the event.

In addition to his vault and high bar scores, Courter added another top-tier performance on floor with a 14.55 for second place in the event just behind Navy.

The Tribe concludes the regular season with another matchup against a military academy as it takes on Army this Saturday at 6:30 p.m. The home event also serves as senior night.

The women’s team also competed over the weekend, finishing third in a field of four at University of Maryland Sunday. Despite its third place finish, the competition was extremely close. The College racked up its second-highest point total of the season at 193.6, only 2.4 points away from first-place University of Maryland.

Junior Brittany Stover highlighted the Tribe’s efforts, breaking her own school record with an overall score of 39.2, finishing second in the overall individual standings. Stover claimed the highest mark in the vault with a 9.875, tied for third in William and Mary history.

Her sister, senior Brandy Stover, chalked up a season-high score of 9.8 on beam, tying for second overall in that category.

The meet featured other superb performances on the individual level for the Tribe, as graduate student Larson Lasek and sophomore Oliva O’Connor finished third and fourth overall respectively, just behind Brittany Stover’s second place finish, as the three athletes competed in all four events.

Up next for the Tribe is a home meet for senior night against Bridgeport Saturday at 6:30 p.m, which will also be the final regular season competition.