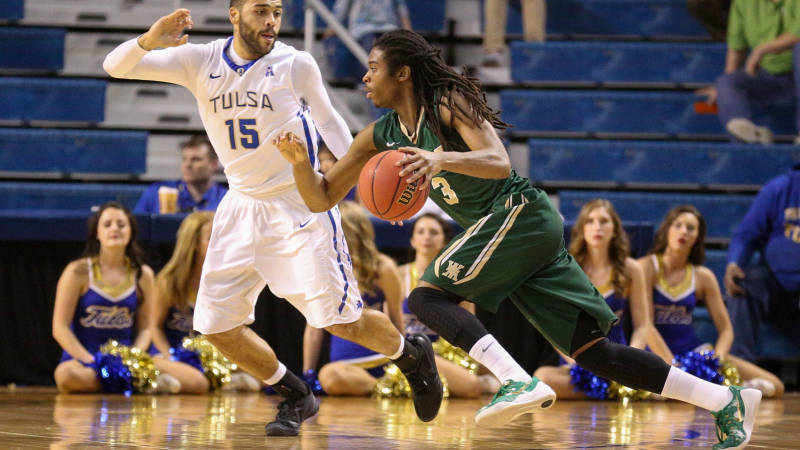 In a close first-round National Invitational Tournament matchup, No. 7 William and Mary lost on the road to No. 2 Tulsa 70-67. The Golden Hurricane led by as much as 21 points before the Tribe whittled away at their lead, closing the gap to as few as two points. The Tribe was unable to finish off Tulsa, missing two potentially game-tying threes in the last 15 seconds.

The Tribe (20-13, 12-6 CAA) held its only lead early on as the first basket of the game was a three-point jumper by sophomore guard Daniel Dixon. Tulsa (23-10, 14-4 American) immediately answered with five points of its own. The teams exchanged buckets until the score was 10-10, but then Tulsa went on an 11-5 run, giving the Golden Hurricane a narrow six-point lead that was enough to force the Tribe into playing catch-up for the rest of the game the College neither tied nor led again. A pair of threes by guards sophomore Omar Prewitt and freshman Connor Burchfield closed the gap to 29-32 with just over two minutes left in the first half, but Tulsa ended the half strong, entering halftime with a 39-32 lead.

Tulsa came out strong in the second, jumping to a 57-36 lead. From the end of the first half to the beginning of the second half, the Golden Hurricane went on a 23-4 run. The 21-point deficit was the largest of the game.

The Tribe kept their heads up and slowly but surely started to eat away at Tulsa’s 21-point lead.

Several factors played into Tulsa’s run. The run kicked off after the Tribe earned a technical foul. Head coach Tony Shaver had questioned the referee’s decision not to call a foul when junior forward Terry Tarpey appeared to have been fouled while shooting a lay-up. Another catalyst to the run was the College’s switch to a 1-3-1 zone defense. The Tribe normally uses a 3-2 zone, and the strategy change gave Tulsa fits offensively. The Golden Hurricane was held to six points in the final eight minutes largely due to the defensive switch.

“We played [the 1-3-1 zone] some late in the season, but it’s not a staple of ours,” Shaver said. “We have worked on it a lot lately, and it obviously bothered [Tulsa] a bit today, and our guys played it well.”

“We weren’t good enough for 40 minutes tonight to win this game on the road against a really fine basketball team,” Shaver said. “I’m very proud of our effort, and how we battled in a tough situation. Wish we hadn’t got down 20 but we showed a lot of character battling back.”

As well as the Tribe played down the stretch, it was unable to completely overcome the 21-point deficit. The College ended the game on a 31-13 run but wound up three points short. The Tribe shot two three-point shots in the final few seconds, but neither went in, failing to send the game into overtime.

“We weren’t good enough for 40 minutes tonight to win this game on the road against a really fine basketball team,” Shaver said. “I’m very proud of our effort, and how we battled in a tough situation. Wish we hadn’t got down 20 but we showed a lot of character battling back.”

Senior guard Marcus Thornton led all players in scoring with 23 points. Tarpey and Prewitt also finished in double digits; Tarpey scored 15 points and added six rebounds and five assists, while Prewitt finished with a double-double at 14 points and 11 rebounds.

The Tribe is now 0-3 in all-time postseason games, but it is the first time it held back-to-back 20-win seasons in decades.