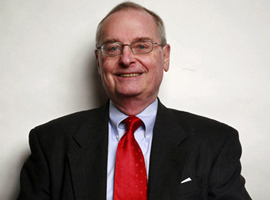 Grayson was a professor emeritus of government at the College of William and Mary for 44 years, a member of the Virginia House of Delegates and a leading scholar on Mexican politics. Grayson died suddenly March 4.

During the remembrance service, hosted by professor John McGlennon and the College’s government department, several of Grayson’s friends and family members shared stories reflecting on the many different roles Grayson played during his lifetime.

McGlennon began the service by recounting Grayson’s life as a scholar. Grayson received his undergraduate degree from the University of North Carolina at Chapel Hill, his master’s degree and Ph.D. from the Johns Hopkins University School of Advanced International Studies, and earned a law degree the William and Mary Law School.

“He was restlessly curious and creatively opportunistic,” McGlennon said. “He knew he was surrounded by experts on the faculty here, just as he was in Washington, Mexico and Richmond orbits. And so, he probed. When George showed up innocently at your door, you knew that he wanted to explore your knowledge, hear your analysis and opinions on a topic which he was studying and on which you had expertise.”

Grayson was hired by the College in 1968 and quickly climbed the professional ranks. He was selected as the class of 1938’s Professor of Government in 1988. Grayson retired from the College in 2012.

In his lifetime, Grayson wrote more than 25 books and monographs, was published many times in notable newspapers, and appeared as a guest on NPR and CNN. Grayson was a widely respected expert on many aspects of Mexican society and was often consulted by policymakers and reporters. He made more than 200 research trips to Latin America in his lifetime.

“Prolific does not do justice to George Grayson’s scholarly achievements,” McGlennon said.

McGlennon shared comments from students about Grayson compiled from the government department’s Facebook page. A common theme in the memories shared was Grayson’s ability to inspire his students through his love of politics. One student recounted Grayson taking their phone and calling their mom to let her know they were doing well in the class. Many students and speakers referred to the iconic felt-tip markers he used to mark up student papers.

“Here was a man that cared so deeply. He often would come to visit me to talk about his experiences with students and invariably talked about how important it was to maintain the standards that would distinguish William and Mary students from those at other universities,” McGlennon said.

Alan Diamonstein, who served alongside Grayson in the Virginia General Assembly, reflected on Grayson’s role in the state legislature. Diamonstein described Grayson as an advocate for the environment, mental health and consumer protection.

“He constantly worked for those that needed help. He had a strong sense of social justice,” Diamonstein said. “He understood the difference between just doing what’s right for today and doing what’s popular for tomorrow.”

Diamonstein also discussed Grayson’s dedication for the College and his push within the legislature to support intellectual capital through funding universities.

“He believed the single most important competitive advantage of any state was the intellectual capital that college education and research grant. He knew and he believed that education was a constructive instrument for whatever social changes were going to come in our society,” Diamonstein said. “He knew that having a degree from a big college was a passport to a good life … He believed if you really wanted a good life that degree had to be from William and Mary.”

College President Taylor Reveley also spoke at the service. Reveley stated Grayson’s death was a great loss for the College and remarked on Grayson fulfilling double-duty; teaching and serving in the Virginia House of Delegates at the same time. He highlighted Grayson’s push to name the state insect and state fossil.

“George was a presence — a robust, vibrant presence,” Reveley said.

Reveley also shared remarks from Rector of the College Todd Stottlemeyer who had Grayson as a professor. Stottlemeyer’s comments shared by Reveley explained that Grayson’s standards were high and his praise highly-valued by students.

Grayson’s daughter, Gisele, spoke on behalf of the Grayson family. She recounted stories of her father, explaining how he taught them to listen to what every person has to say. Grayson is also survived by his wife Bryan Grayson and his son Keller.

“George was a dad and he was involved in my and my brother’s life before being an involved dad was cool,” his daugther said. “We learned a lot from him in terms of the way he had us explore the world. He always made us curious about the world and we had this amazing example of watching how he treated people throughout his whole life.”

The remembrance service was ended with a rendition of Amazing Grace.