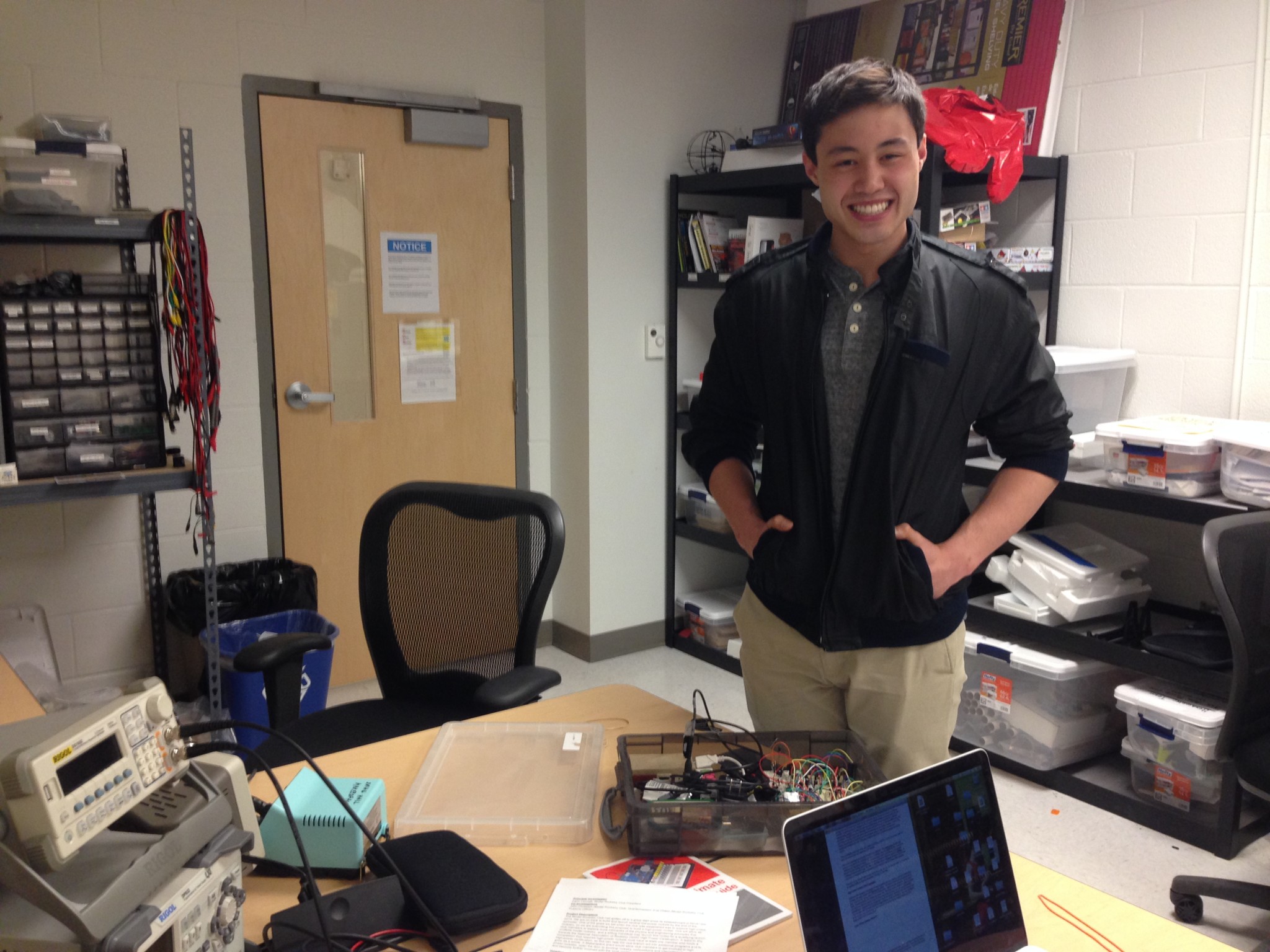 Where can you make a shaving kit holder, a 3D-printed prototype of an idea you’ve always had, and an experimental device to provide reliable power to those in need? Where can you be the creator of the next tech startup born on a college campus, a mad scientist of music and a problem solver? Students looking for these opportunities have found the tools to achieve them in the Makerspace of Small Hall 143.

Physics professors Wouter Deconinck and Josua Erlich don’t seem to care much whether students’ inventions will be silly or serious. As founders and managers of the College of William and Mary’s own Makerspace, they simply wish that students try, learn and make.

An idea that emerged from a conversation at a party, the Makerspace launched in January 2014 with strong support from administration and input from students about what gadgets they would want in a new tech lab.

“That was the point where I started seriously considering establishing the Model Rocketry Club as well,” Karin Lehnigk ’16, who eventually did found the club, said in an email. “The two main barriers to starting the club were finding lab space and funding, and the Makerspace resolved both of those.”

The Makerspace is equipped with a range of surprisingly unintimidating tools, including a 3D printer, the Ultimaker2, a laser cutter and walls of cabinets filled with specialized kits and devices to toy with.

Like Lehnigk, Eve Chase ’17, publicity chair for the Robotics Club, said that her interests and activities wouldn’t have a physical outlet without the Makerspace. While Chase described 3D-printing parts for the quadcopter that Robotics Club is working on, she emphasized that there are many less complicated projects to be done.

“Makerspace is a really great resource for the whole community,” Chase said.

The professors responsible for the Makerspace’s existence said they want the space to be open to all students with all manner of ideas for creations.

“The idea is that students will come here, often with their own ideas of things to do, but we’re hopeful that students discover things and just say ‘hey, I want to make a hologram,’” Erlich said. “All of the consumables are meant to be consumed and used.”

Physics graduate student Andrew Rotunno  made an analogy to the Harry Potter series, likening the Makerspace to the wizards’ playground that is the Room of Requirement.

“The Makerspace is the tinkerer’s version of the Room of Requirement, where whatever you need will appear, or where what you need is already there”

“The Makerspace is the tinkerer’s version of the Room of Requirement, where whatever you need will appear, or where what you need is already there,” Rotunno said.

“This procedure [of the User Board] is in the spirit of letting the Makerspace users govern the space and the funding to some extent,” Deconinck said in an email. “Project proposals are reviewed … on their individual merit (this doesn’t mean that they have to lead to a “product” but they should have a specific goal and timeline).”

The space isn’t just for goal-oriented work. It is open for general experimentation and is well-supplied with kits to make a hologram, program a smartwatch and more. These kits can be used to make a particular invention or can be fiddled with during a lazy afternoon.

“I’m working on research in human perception through signal processing. I’ve had this particular idea floating in my head for a while, but only after I heard about the Makerspace could I actually put it into action, since it’s somewhat out-of-scope for my normal field of study,” Quint Guvernator ’17 said in an email. “Wouter urged me to submit a research proposal for the idea even though I didn’t have specifics at the time, and a few weeks later, a big box with my name on it full of equipment was sitting on a desk.”

To Michael Kopreski ’18, the value of the Makerspace goes beyond the materials it offers; he said he believes the Makerspace’s atmosphere inspires innovation.

The people who use the Makerspace most were careful to stress its openness to the student body as a whole.

“If it occurs to you that it might be useful to make something, to have something tangible, the space is here, meant for you,” Erlich said.