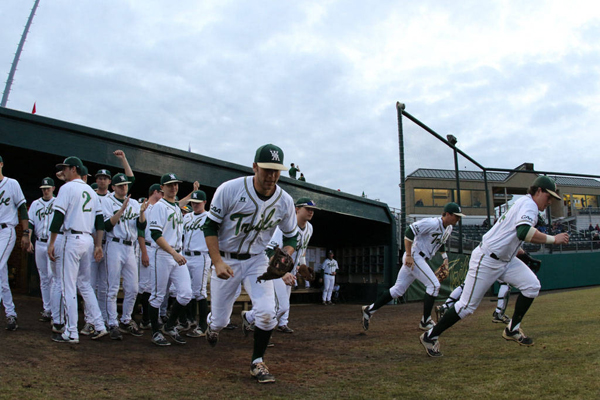 The College of William and Mary began its road trip with a pair of losses Tuesday and Wednesday, falling 4-1 at Radford before losing 4-0 at Old Dominion. At nine games, the road trip is the longest the team has taken this season.

The College (12-13, 4-2 CAA) opened the scoring on Tuesday against the Highlanders (16-11, 5-1 Big South) in the top of the third inning. With one out, sophomore right fielder Porter Reinhart roped a double to left center field. Freshman second baseman Cullen Large followed with a single, plating Reinhart from second, bringing in the Tribe’s first and only run of the contest.

The Highlanders answered in the bottom of the fourth inning. Radford’s Josh Gardiner led off the inning by reaching first on a passed ball following a strikeout. Gardiner stole second, advancing to third on a fly out by the Highlanders’ Shane Johnsonbaugh. Patrick Marshall then swatted a two-run home run for Radford off freshman starting right-handed pitcher Robert White, putting Radford ahead 2-1.

The Tribe offense mustered next to nothing for the rest of the game, failing to get a runner on base in the fifth through eighth innings. The Highlanders pushed to extend their lead in the sixth and the seventh, but the Tribe defense came up with key plays, throwing out a runner at home for the third out in both innings.

Radford finally broke its scoring drought in the bottom of the eighth as it loaded the bases with no outs on freshman right-handed pitcher Charlie Fletcher. Marshall pushed across a run with a fielder’s choice to second. After a pop out, the Highlanders’ Danny Hrbek drove in the game’s final run with a single, chasing Fletcher and increasing Radford’s lead to 4-1.

The College got a runner on base in the ninth as junior catcher Ryan Hissey singled to right field with one out. Hissey advanced to second on junior first baseman Charley Gould’s groundout. The rally stopped there, however, as senior designated hitter Devin White grounded out to the pitcher and Radford claimed the 4-1 victory.

Robert White took the loss for the Tribe, dropping him to 2-2 on the season. He pitched five innings and gave up two runs, one earned and one unearned, on three hits while striking out three. Zack Ridgely earned his first win of the season for the Highlanders, striking out six while surrendering one run on three hits over six innings of work.

After the loss, the Tribe traveled to Norfolk, Va., to take on Old Dominion. After four scoreless innings, the Monarchs (14-12, 3-6 C-USA) took the lead in the bottom of the fifth inning. ODU’s Jason McMurray reached second on a throwing error by senior third baseman Willie Shaw, advancing to third on a groundout. The Monarchs’ P.J. Higgins brought McMurray home with an RBI groundout to shortstop. Old Dominion added another run in the next inning on a sacrifice fly by Derek Francis to increase its lead to 2-0.

The Tribe offense continued to put up zeroes, getting runners on base but failing to plate them. The College left two runners on base in the fifth, sixth and eighth innings, unable to provide its pitching staff with any run support.

“We’ve got a lot of guys who are frustrated with good reason, but I don’t think you get out of it all at once. Every day we got to get a little bit better, and continue to trust what got us here.”

“We took some decent at bats,” head coach Brian Murphy told Tribe Athletics. “We just had a really hard time getting runners on at the beginning of innings, and we had a really hard time stringing at bats together. But I thought the quality of our at bats was better than last night … but obviously the results weren’t there.”

The Monarchs padded their lead in the bottom of the eighth. McMurray singled with one out. After stealing second, he advanced to third on a throwing error by Devin White. ODU’s Nick Walker then blasted a home run over the left field fence, stretching Old Dominion’s advantage to 4-0.

The Tribe mounted a comeback effort in the ninth inning, but once again couldn’t push across a run. Shaw walked with one out, and then Reinhart was hit by a pitch. However, the next two batters struck out, and the Monarchs completed the 4-0 shutout, the first time the Tribe has been shutout in 2015.

“I think as a whole right now, we just need to get back to the process of just taking good at bats.” Murphy told Tribe Athletics.“We’ve got a lot of guys who are frustrated with good reason, but I don’t think you get out of it all at once. Every day we got to get a little bit better, and continue to trust what got us here.”

Freshman right-handed pitcher Michael Toner was tagged with the loss, pitching four innings in relief, allowing an unearned run on two hits and walking one. Sam Sinnen won his second game of the season for the Monarchs, pitching six innings of four hit, no run ball, walking one while striking out two.

Friday, the Tribe begins a three-game series against Colonial Athletic Association opponent Towson. The first game is scheduled to begin at 3 p.m.