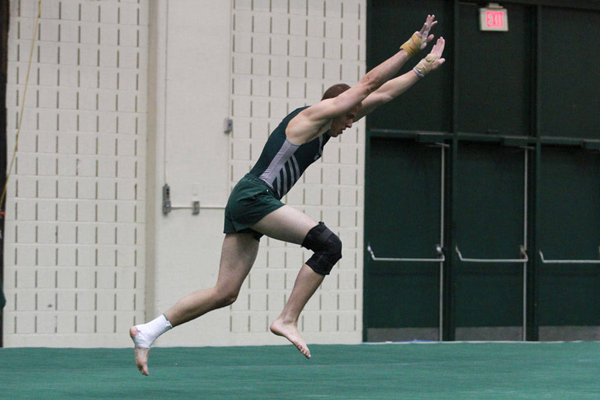 William and Mary sent seven athletes to the Midwest to take part in the National Collegiate Athletic Association Championships hosted by the University of Oklahoma last Thursday and Friday.

Although the Tribe didn’t have any athletes advance to Friday’s second round of competition, it still posted some impressive performances.

Sophomore Aria Sabbagh, the Tribe’s only competitor in the all-around competition, finished with a total of 79 points and took eighth place overall in the event.

It was a busy weekend for senior Michael Deitz, who took part in three separate events. He tied for 24th on floor with 14.4 points, finished 22nd in the vault at a score of 14.35 points, and secured 19th place in the high bar at 14.5 points. In addition to his achievements in the gym, Deitz was also selected by the NCAA Student-Athlete Speaker Selection Committee to serve as the featured student-athlete speaker at the championship meet’s banquet and awards ceremony.

Junior Nick Van Dyke competed with Deitz in the vault, finishing 15th at a final tally of 14.6 points.

Sophomore Rob Meyer also took part in one event, finishing 23rd on the parallel bars with a score of 13.85.

The hosting Sooners took the team competition with a score of 447.05, securing a perfect season and their ninth team championship.

This competition wraps up this year’s schedule for the Tribe, which graduates four seniors, Wang, Deitz, Ten Eyck and J.J. Jindra, this spring.