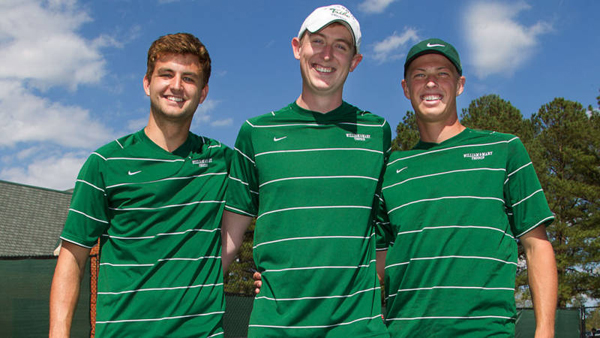 William and Mary’s women’s team won 4-1 against Old Dominion, while the men lost 4-3 to the same team. Both matches took place Saturday at 2 p.m. and featured celebrations of the squads’ senior members Jeltje Loomans, Aaron Chaffee, Zach Braig and Will Juggins.

No. 51 Leeza Nemchinov lost her first set in a tight tiebreak, but rallied to win the equally tight second-set tiebreak. In the third set, she dominated 6-1 to clinch her victory at the No. 1 spot. Nemchinov now holds an impressive 16-1 record at the No. 1 singles position. She also snapped the 17-match winning streak of her opponent, No. 98 Borislava Botusharova.

Loomans won her No. 2 match in straight sets, as did freshman Olivia Thaler in the No. 3 position. This was Loomans’ 65th career win.

The College swept the doubles, though the No. 2 duo of freshmen Maria Groener and Thaler did not finish. In the No. 1 position, Loomans and Nemchinov combined to win 8-5 over the Monarchs. This doubles win places Loomans in a tie for fourth in Tribe history. In the third position, Roy and junior Julia Casselbury also won 8-5.

On the men’s side, the Tribe (13-12, 1-0 CAA) won the doubles point over the Monarchs (15-2, 3-0 C-USA). All three matches recorded scores of 8-4, and two of those three matches ended favorably for the College. Chaffee and Juggins won at the first position, while freshman Christian Cargill and sophomore Damon Niquet clinched victory in the third position. Cargill and Niquet now hold a 4-1 record in the No. 3 doubles position.

The Tribe recorded only two wins on the singles side. Sophomore Addison Appleby handedly won his no. 3 match 6-0, 6-4. Freshman Lars de Boer dropped his first set but rallied to win the second 6-4. He was up 3-0 in the second set when his opponent forfeited.

Both Cargill and freshman Alec Miller took their matches to three sets. Cargill won the second set of his No. 1 match, but was overpowered 6-0 in the final set; in the sixth position, Miller also won the second set and relinquished the third.

The Tribe men and women will both host the Colonial Athletic Association Championship later this week. The quarterfinals will occur Friday, while the semifinals are set for Saturday and the finals for Sunday.  The women’s team has earned the No.1 seed for the CAA tournament coming up this weekend. The Tribe will face either 8th-seeded Delaware or 9th-seeded Hofstra on Friday morning.