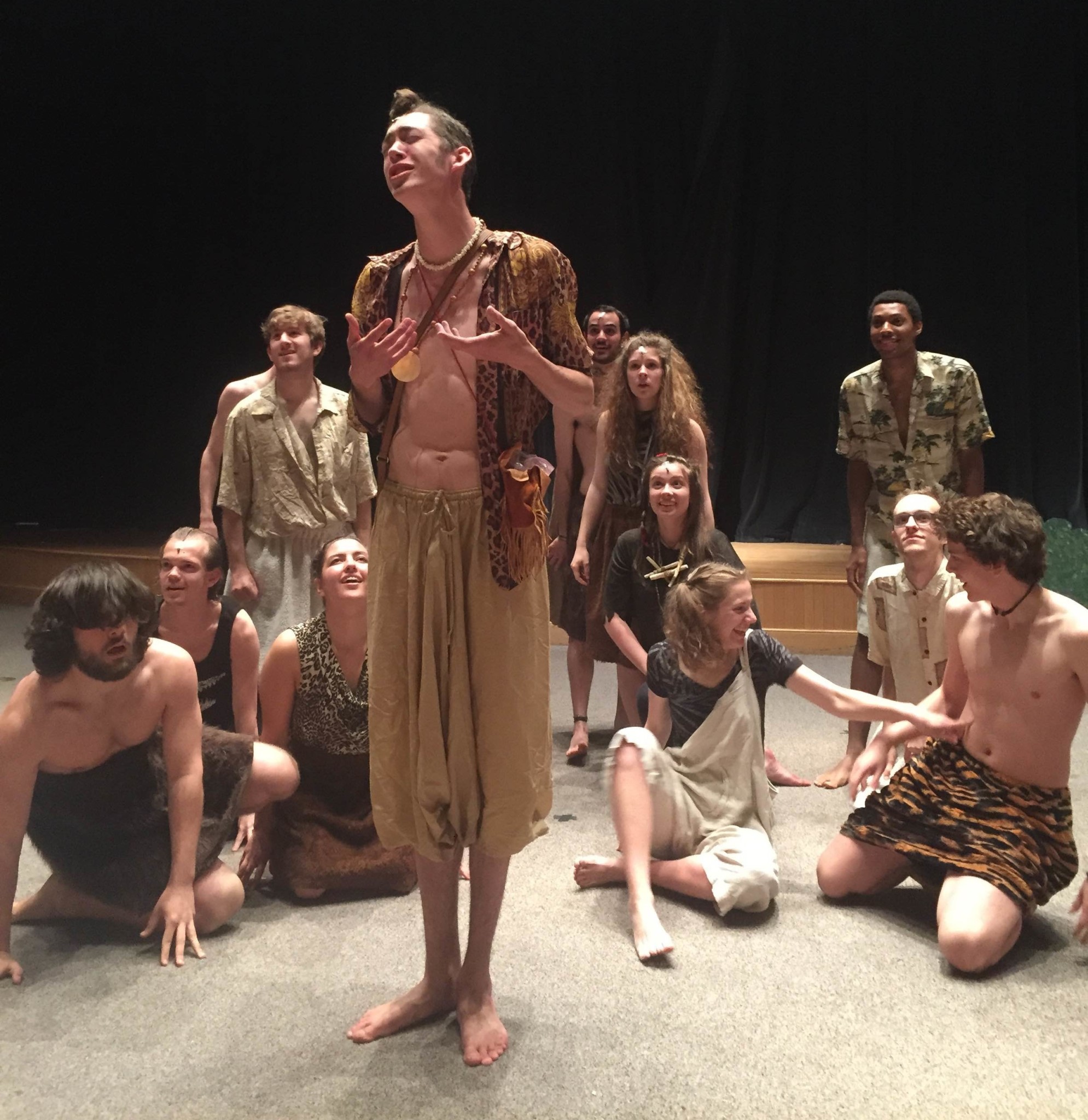 Mankind has come a long way from the days of loincloths, guttural cries and the occasional act of cannibalism. If you find yourself missing those days, take a trip back in time to enjoy “Me Prometheus,” the funniest musical comedy on the prehistoric theater scene.

The ambitious brainchild of Simon Riker ’14 and Emerson Sieverts ’15, “Me Prometheus” first premiered at Wesleyan University in April 2014 before making its College William and Mary debut. Directed by Dunham Janney, ’18, “Me Prometheus” follows Herbert (Brian Crowley ’16), an endearingly awkward and inventive caveman whose only wish is to make his family proud and win the girl of his dreams. However, when the impending ice age threatens his tribe, Herbert must awaken his inner fire to save the ones he loves, despite their lack of faith in him.

“Me Prometheus” was presented by a crew well versed in the nuances of orchestration, production and original, genuine comedy. While some jokes were less than subtle and there were a few seemingly unnecessary scenes that failed to contribute much to the overall story, the dialogue never failed to elicit roars of laughter from the audience.

Riker and Sieverts’ orchestrations have all the makings of a cohesive score that included sounds of classic and contemporary show tunes alike. The band itself proved versatile with all the necessary flourishes, but while it managed to bridge the gap during scene changes, abrupt stops began the following scenes with an unpolished jolt.

Costumes designed by Claire Seaton ’18 and Corey Strickland ’17, contributed greatly to the aesthetics of the production along with an exciting use of makeup and an intricate mess of hair designs that greatly accentuated each character’s look.

Costumes designed by Claire Seaton ’18 and Corey Strickland ’17, contributed greatly to the aesthetics of the production along with an exciting use of makeup and an intricate mess of hair designs that greatly accentuated each character’s look. Victoria Mangiapani’s ’15 selection of clever props led to several well-timed and humorous moments. Choreography by Megan Tatum ’15 was disjointed at times, but the cast, led by dance captains Keaton O’Neal Hillman ’16 and Christine Jacobs ’16, overcame their occasional missteps with energy and inflection. Despite this, some musical numbers clearly focused more on vocal quality than complexity of movement and proved dull compared to the show’s general vivacity.

The cast of “Me Prometheus” hailed from various realms of the College’s theater scene, but combined their strengths to put forth an organic performance. Several actors struggled to be heard over the band, which meant the unfortunate loss of clever dialogue. However, the members of the cast without lines portrayed distinct and engaging characters, creating their own memorable moments.

Baxter Gaston ’15 brought a great deal of life to the stage, despite his character’s frail and aging body, portraying Bubdub’s senile ramblings with chaotic mannerisms. Perhaps the show’s most powerful vocalist, Robert Quittmeyer ’16 played the conniving Birns with a level of intellectual haughtiness that even Draco Malfoy himself would be proud of. His outstanding volume and distinct movements anchored the cast during musical numbers such as “Magnificent Machine” and “You Got Stood Up.” Aaron Stapel ’17 held no reservations as The Great Neepaz, combining his stature and articulation with his well-timed use of props to highlight some of the show’s greatest comedic elements.

Brian Crowley’s ’16 depiction of Herbert’s zero-to-hero storyline contributed to a genuine and, for the most part, compelling story. Crowley’s chemistry with Aidan Smith ‘16 as Herbert’s best friend Grob proved to be the pre-historic bromance to end all bromances and provided material for many of the show’s funny moments.

Jess Hoover ’15 and Jordan Leek ’17 handled the show’s sound and lighting design, respectively, and with only a few glitches distracting from the performance. The cast took advantage of Commonwealth Auditorium’s vast floor space and aisles and, while their close proximity to the audience rendered several mistakes noticeable, the actors never wavered in their conviction.

The dynamic cast of “Me Prometheus” embodied all the elements of a successful musical comedy with vigor and hilarity. While the show still requires a bit of refinement, its lofty aspirations certainly hit their mark and the cast and crew should be proud of their capacity to find joy in their creation and share it with the campus community.