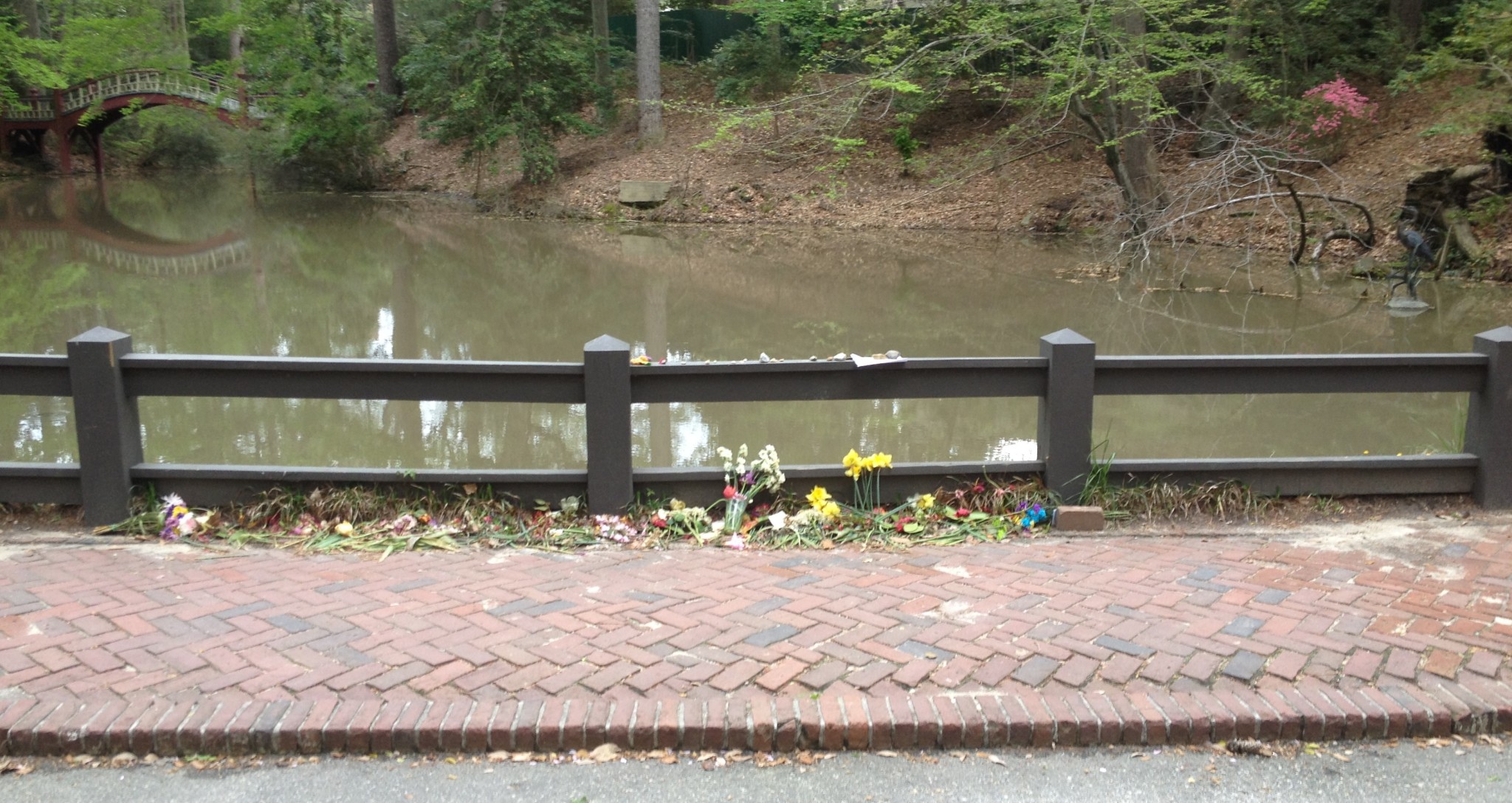 “Notice to the Community” is a harmless set of words, but not for students at William and Mary like myself. This is the subject line we get in our inboxes when something terrible has happened, like a violent act, or the passing of one of our community members, and often, it is the opening to a message explaining that one of our own has committed suicide. Our small, elite state school is picturesque and safe by most accounts, but our suicide rate is startling. Our undergrad population is only around 6,000, which is quite small for a state school, but we just had our third suicide of the academic year this week. The fury inside me feels like fire poured into me like cement. How do you carry on when you are burning alive? How do you move forward with concrete grief and sadness filling you from toe to throat?

I don’t know how. But we do. Because that’s how we are here at William and Mary. This academically rigorous environment is home to mostly valedictorians who took tons of AP courses and founded non-profits in high school and won trophies. We did not get here by slowing down, by taking breaks, or de-prioritizing achievement. And that’s probably what is, at least in part, killing us.

Suicide looks very different in my world than to most others. The people in my communities who killed themselves are not people you might suspect. They did not exhibit classic signs of suicidal ideation. They were highly involved, often high achieving, very social people. My county was investigated by the CDC for its alarming rate of teen suicide and the unusual circumstances surrounding them– namely, that the victims were often high-achieving, well-liked, socially well-adjusted kids. It is the same for the three students this year alone who have taken their own lives here at William and Mary. Our community is so loving, so genuinely good-hearted, but that’s not enough.

It is not enough to say “One tribe, one family.” It is not enough to ache at our losses. I am burning from the inside out and I will not settle for being turned into nothing more than fuel to light yet another candle in memoriam.

It is time to be angry.

I am a believer in productive anger. There are things that should trump our desire to keep cool. Our sense of justice, our sense of humanity, and our very survival, should weigh more than a desire to keep peace. Peace has not solved the problem. Every loss cuts deeply to a small community like our own, and yet change comes too slowly, too little, too late. How many bodies will it take before we get it right? It is hard to be angry when you are overwhelmed by sadness, and I cannot expect productive anger from everyone, but if it is in you already, keep it alive and let it fuel change.

Suicide is complicated. Brains are complicated. There is not one clear-cut solution to solving a problem that is one of the leading causes of death in young adults. I’m not going to assert that being angry is going to cure a community of suicide. I’m going to tell you though, that there are environmental and cultural factors at the College of William and Mary that contribute to the problem, and we collectively need to be pissed off enough about it to make changes happen faster.

If you bring together a bunch of highly academically and achievement-oriented kids to one school and establish that as the overwhelming norm, they are going to push each other. And in many ways, that’s a good thing. I could not have imagined a more talented, driven, intelligent group of people to go to school with. I am challenged here and I grow, and most students would agree. But for so many students, their sacrifice, their hard-work, their sleepless nights and overcrowded schedules become deeply linked with their identity and their sense of self-worth. When you are surrounded by superhumans, it often feels shameful to– even for a moment– just be a human.

It can be terrifying to ask for help. No one at this school wants to be seen as a weak link, and it’s not because we think others will hate us for it, but because we all so want to deserve to be here. Everyone’s acceptance letter was hard-earned. Every grade is hard-won. We are all so used to finding some way to get by that the expectation is that we, like the thousands before us since before even the birth of this nation, will some how find a way to do it all. We often ask for help too late, if at all, believing in our own ability to hoist ourselves up from whatever circumstance we have become mired in. We are superhumans, after all. Why trouble someone else when we know we can find a way to fix it alone? This is hard enough when we are talking about final projects and midterms, but sometimes its our very safety and wellbeing we lose our grip on.

To make matters worse, the administration and lack of adequate mental health services on campus makes it even more difficult to get help.

Friends of mine have been hospitalized for months at a time and been denied medical withdrawal requests, leading to a semester spent off-campus in recovery counted on their transcripts as a bunch of Fs. Others have been sick for weeks and been told that notes from doctors would not excuse them from class, so they are left hacking up lungs, suffering and exposing other students to god-only-knows-what, because they can’t even get the time off to see a doctor. It is even harder for students with invisible illnesses like depression, severe anxiety, PTSD, etc. to get some professors to understand their needs. It is not that those professors don’t care, it’s that they’ve seen our kind endure before. But we can’t always endure and sometimes it is the straw that breaks a camel’s back.

Our counseling center is woefully underfunded. We do not have the right kind of professionals to handle the needs of the students here. Outside of run of the mill relationship issues, mild addictions, mild eating disorders, and general “stress” the Counseling Center Professionals are out of their depth– and it’s not their fault. They do the best they can, but at a certain point, it’s irresponsible to not pass a student off to a more qualified professional.

But how does that hand-off work? Our campus is very self-contained, with a basic bus system servicing it. Most people don’t have cars. How do people get treatment then? Not to mention many students don’t have adequate means of covering costs. Getting adequate help should not be this difficult. There have been three suicides this year. Four in my four years at this school. In 2010 there were also three suicides here. We need to do better.

And that’s not to say people aren’t trying. Our student council has been working to improve services, student groups like HOPE and Active Minds are working to create peer resources and create more positive dialogues. The administration is trying to devise better plans and strategies to deal with mental health issues on campus. A large part of the problem is a lack of funding. It is hard to make anything a priority that doesn’t have the dollar-signs to back it up. What could be more important than our students surviving their education? Apparently a lot. We have to force the issue, we have to make a fuss, we must demand funding for everyone at this school now and into the future, and at every other school. Each loss cuts deep. We are a caring community. We want better for each other.

But what do we do when we create an environment where sometimes success and health become mutually exclusive? How do we get through to someone and explain to them just hownot okay we are when there are classes we “can’t afford” to miss? What do we do when we continually reward sacrificing our bodies (all-nighters, vomiting between lectures, forcing ourselves to continue when sick) for a grade? Where can we turn when some of our greatest validation came from this struggle? What do we do when we are told so often for so long that we are superhuman, that we will be okay, that we begin to believe it even when we shouldn’t?

We find a way, and we’re okay, until we don’t and we aren’t.

Let’s make changes. Let’s do better. Let’s be a force that can’t be ignored or distracted. Let’s find ways to make lasting changes. I call upon anger because that is what my fire is made out of right now. If your fire is made of something else, no matter. The point is to not let it go out. Use it to do something that will help others who need help.

Work with administration and/or student groups, voicing your concerns, proposing and executing solutions.

Be there for your friends. Be good to yourself.

If you are contemplating suicide there are tons of resources available to you.

IMAlive.org is a chat service you can use whenever to talk to someone if you are struggling with thoughts of suicide.

The National Suicide Prevention Wiki lists tons of services you can use, many have specific demographics they serve so they can better meet your needs, whether you are a Grad Student, have specific language needs, are GLBT+, under 18, and more.