Home Variety Blogs The Character of a Fried Oreo 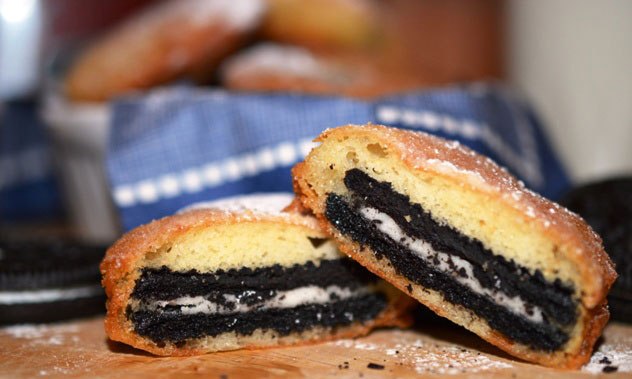 Strolling from building to building on the College of William and Mary’s campus in the springtime involves two Herculean tasks:

1) Fighting the urge to plop down on the oriental rug of new spring grass popping from just-thawed winter soil and ignore all pending assignments.

2) Navigating through throngs of tour groups where teenagers with deer-in-the-headlights expressions and parents with furrowed brows, internally debating whether or not they should take out a second mortgage to cover Junior’s printing costs, wander behind cheerleader-enthusiastic guides delineating statistics about the College.

For the veterans of the first warm days at the College who have avoided the allure of the ground plush and have averted straggling prospective students, the breeze manages to carry bits of factoids to our ears.

We catch a few pieces of conversations:

“The Wawa on Richmond Road is one of the highest-grossing stores even without a gas station.”

And then my thoughts drift to fried Oreos sputtering and floating in a greasy deep fryer behind the narrow counter of a lopsided-frame convenience store somewhere in the Shenandoah Valley.

As the last stop heading west out of Staunton, Virginia, the cobbled-together pieces of the store bid farewell to the grimy end of West Beverley Street as it picks up its county name of Route 250, which races through the last of the Valley and into the mountain Gap. The store, Wade’s, looks like any other roadside stop somewhere in the rural South. The shape of the parking lot rivals the lopsidedness of the whitewashed building. The yellowed-sign, the type with interchangeable black letters, hangs from a faded back-lit Coca-Cola advertisement on a black metal pole and proudly advertises the store’s ABC license. Posters with pictures of cigarettes the size of my body fill the squatty windows and flap from the posts of the narrow overhang in front of the door when large-enough trucks creating diesel-infused gusts trundle up the hill.

The worn door swings open to an effusive greeting: the monotonous buzz of fluorescent lights, the hum of a wall of refrigerators—glass-fronted 1980s hold overs from which a Farrah Fawcett look-alike wearing a bikini and holding a condensation-covered bottle of Bud Light might step in a tacky TV ad—the raspy murmur of blue collar men on their breaks stopping by for a Coca-Cola and a Klondike bar talking about the weather. Just as eyes adjust to the dim haze of the long, tightly-packed room with low ceilings, a woman in her late middle-age with big hair and a tanning-bed hard face calls, “Hi, sweetheart, what can I get you?” from behind the counter that stretches the length of the store. Perhaps she thinks the creamy skinned day-dreamy girl who walked through the door and into the heart of an outpost for the hard-worked and hard-lived might be lost. Sheepish lips and a faint smile issue the response, “Hi. Could I please get a couple of fried Oreos?”

Sheepish lips and a faint smile issue the response, “Hi. Could I please get a couple of fried Oreos?”

Despite everything that Wade’s deep fryer pours into warming tins or directly into boxes—chicken, catfish, frog legs—the Oreos create devotees. They come straight out of the grease at two for a dollar, their thick batter cloaks sweating into a petit white paper bag that crinkles satisfactorily as it opens. The inferno of the fryer transforms what once was an Oreo into a mass of molten cookie-ooze. Layers of barely differentiated chocolate and cream peek out golden crust of some divinely and evilly fatty batter, crispy but simultaneously fluffy, with the first bite. Impatience for the little delicacies to cool has burned many a hasty tongue, but taste buds wait in loathing as they anticipate everything childhood ever wanted in birthday cake, milk and cookies, and funnel cakes all at once. A wine geek might describe the mouthfeel as an airy crunch giving way to a velvety squish. A layman might describe it as carnival nostalgia.

The register clicks as it stores away a dollar and four cents—cash only, no cards or checks. The paper bag rumples as the fat little disks change hands. The door swings open to a man with a beer gut with kneepads for construction work advising me not to eat too many of them, “Or you’ll end up looking like me.” And then the door swings closed on racks of vegetable garden seed packets, apple butter made by a Methodist church, stacks of Skoal and Copenhagen cans, and Moon Pie-laden shelves.

The tour has trundled dutifully onward to some other stop, and almost-summer breeze floats around my head. My wandering thoughts have left me with the urge for something highly caloric from a convenience store, but Wawa doesn’t hold the same charm for me that Wade’s does. It’s too clean, too “anywhere right off the interstate” with its spacious aisles and touch-screen ordering system and neatly-portioned fruit sitting in sleek refrigerators. Tipsy college kids arrive at 1:00 AM instead of work-boot clad men at 7:45 AM. Williamsburg’s Wawa—and the 645 plus others exactly like it—isn’t Wade’s. I could pick up Williamsburg’s Wawa and set it in Pennsylvania; no one would discern the difference. Tasting fried Oreos atop a hill in the Valley would have to wait until the spring breeze turned into the heavy air of summer when everyone leaves campus and returns to the local haunts of their own homes…  but Wawa does have doughnuts, that’s one redeeming factor.