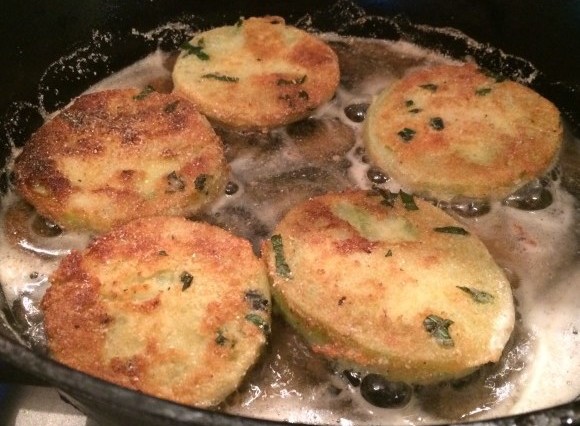 I want to ask a fried green tomato, and several other Southern foods, one question: What circumstances brought you into this world? The Dr. Seuss-like green wheels parade on a platter as eccentrically as the mildly-batty relative — common in families below the Mason-Dixon — parades in the living room during all major holidays. Both the tomato and the family member don’t exude the same rosiness of the other guests, can’t discuss commonalities, and often require no embellishment. Though the dish has its roots in all-American frugal housewifery of the waste-not-want-not ken, the South has embraced it as its own and welcomes the oddly unripe and garishly colored fruit to its tables.

In the same manner that we make polite small talk — complete with charming drawl and eyelash fluttering — out of oddities that have escaped from the mouths of our infirm and elderly kin, we indulge in the premature fruit. Moses should have carved something against both of these actions in the annotated version of the Ten Commandments: Light banter about the mishaps of our own flesh and blood seem to relate distantly to honoring thy father and mother, and disallowing a tomato to reach its scarlet fruition… well, that’s just wrong. But both the stories and the tomatoes continue to brighten dinners.

My mother — a member of the Garden Club, lauded for her flower arrangements and generally possessed of a green thumb — sometimes cannot coax the Pink Ladies into their perfect Clinique blush or the Mr. Stripeys into their lurid crimson and gold seersucker suits. Call me a misguided sinner, but each summer, I secretly hope that the fruit on the sprawling wild vines tangled through the strict metal tomato cages refuses to turn its face to the sun and absorb the red heat.

Finally, with sighs on one part and inward shouts of joy on the other, we resign ourselves to green tomatoes, fried green tomatoes, and pull the unyielding plump fruit from the lolling vines faint with the heat’s intensity.

As the infant days of August with their terrible cries that hush cool breezes unfurl the worst humidity of the summer through the Valley, we grow anxious. The gardener hopes that more of her tomatoes will turn, while the eater hopes that the tomatoes will resist their natural inclinations. Finally, with sighs on one part and inward shouts of joy on the other, we resign ourselves to green tomatoes, fried green tomatoes, and pull the unyielding plump fruit from the lolling vines faint with the heat’s intensity.

The flesh of the tomatoes glares up from the cutting board with an almost neon glow. Triangles within a slice of what-would-be in a consummately ripe tomato a gelatinous nebula of seeds and still hold their firmness. None of the blood colored juice trail that creates a slow trickle of a waterfall from cutting board into sink appears as vine apple after vine apple quickly tango with the deft sawing motion of the serrated blade of the knife.

After a buttermilk bath — almost the same that Wilbur of “Charlotte’s Web” received before the fair — the slices, slimy and glistening, dry in a cornmeal coating as they meet with thin slices of basil. Then they dip into a cast iron skillet sauna of waist-high lard and oil. The sputtering fattiness gently cooking the cornmeal initiates a popcorn-like aroma as the skillet grows hotter and a slotted spatula flips the slices to the other side to reveal what looks like a flawlessly round piece of sandpaper.

Barely cooled, they rest stacked like pancakes on plates around the dinner table in their crisp and almost gritty robes that barely disguise the vivid flesh of the tomato. A bite reveals still-warm innards still holding the shape of the fruit, pleasantly firm to the teeth as they pleasantly sink through the brittle, never overly-fussy shell of the batter through to the other side. Tart tomato ingratiates itself to the adiposeness of the cornmeal for a palatable balance with which nature failed to endow the tomato itself.

A bite reveals still-warm innards still holding the shape of the fruit, pleasantly firm to the teeth as they pleasantly sink through the brittle, never overly-fussy shell of the batter through to the other side.

Despite the balance of fat to acid that the fried green tomato boasts, it refuses to become an integral part of a dish. It boldly draws attention only to itself, can barely hold the company of plump sautéed shrimp and won’t hold a conversation with other vegetables unless forced together on a sandwich like estranged cousins at an uncomfortable family reunion.

In spite of, and perhaps because of, its idiosyncrasies, the South has adopted the dish as unique and bright as the exterior of South Carolinian coastal houses. We serve it as an hors d’oeuvre amongst clinking glasses of basil gin and tonics to spark conversation on the patio before dinner, as we enrapture guests with our tales of the curmudgeonly uncle who has an obsession with Russian nesting dolls. The bolder amongst us lick the cornmeal from our finger tips as we join our sane relatives to observe the behaviors of the slightly-off-kilter kin. Afterwards during dinner, we unfailingly never experience lack-of-topic induced conversation lulls filled with the faint scraping of plates and intent examination of the family silver.