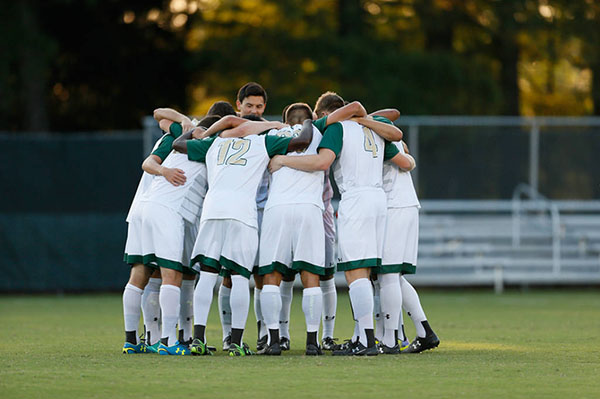 After finishing with a losing record in both the Colonial Athletic Association conference matchups (3-4-1) and the overall schedule (6-11-1) in 2014, William and Mary seeks to redeem itself and make a run for the National Collegiate Athletic Association Tournament as it did in 2013.

With spring and summer training over, the Tribe is back and ready for high-level competition in both the Colonial Athletic Association and the non-conference parts of its schedule. Head coach Chris Norris returns for his 12th season along with three seniors and several 2014 starters.

After nine seniors graduated in May 2015, the new roster is much younger, featuring 22 underclassmen, including 11 freshmen, on the 25-man list.

After nine seniors graduated in May 2015, the new roster is much younger, featuring 22 underclassmen, including 11 freshmen, on the 25-man list.

Glancing at the schedule ahead, the College doesn’t have an easy path to a possible playoff qualification. Six of the Tribe’s opponents are in the preseason Top 25. Notable among these matchups is No. 2 North Carolina-Chapel Hill, which the College defeated in 2013 while the Tar Heels were the top-ranked team in the nation. The 2015 slate consists of nine non-conference games and eight matches against CAA teams. Most of the games are road trips, as the Tribe only hosts six games over the 17-game season. The home matchups are Sept. 1 vs Liberty, Sept. 15 vs Charlotte, Sept. 30 vs Elon, Oct. 3 vs Hofstra, Oct. 17 vs North Carolina-Wilmington, Oct. 20 vs North Carolina-Asheville and the regular season finale Oct. 31 vs Delaware. The CAA Championships are scheduled for Nov. 7-14 at the No. 1 seed’s stadium.

Despite the youth of the team, many experienced players are returning for the Tribe. However with the new players still vying for time, there are many possible starter combinations to choose from for week one.

In the front, the Eskay brothers — senior Jackson and sophomore William — return as forwards for the Tribe. William Eskay led the squad‘s scoring last year with four goals and three assists. Junior forward Reilly Maw also returns this year after scoring four goals and two assists in 2014. The forwards are rounded off by three freshmen: Marcel Berry, Ryder Bell and Christian Jones.

The Tribe’s primary tactics have yet to be seen, but the midfielder spot will continue to be the crucial position to control both sides of the ball and get the College out of tough spots. Sophomore Riley Spain will likely remain the defensive force in midfield after starting every game last season. Juniors Jeff Bombelles and Chris Dunn will play key parts of midfield play once again. A quartet of freshmen has been practicing as midfielders and will more than likely get exposure and experience through the season; those freshmen are Antonio Bustamante, Josh Cox, John Fuquene and Cole Smith.

On defense, senior Ryan Flesch moves from his role as a midfielder to the backline to support a string of players with less experience as a right defender. Four team members are competing for the Tribe’s two center back slots; juniors Ryan Perry and Jordan Petitt, sophomore Alfonso Speed, Jr. and freshman Remi Frost will be utilized in the position as each player works to earn more playing time. Redshirt sophomore left back Adam Crenshaw also returns this season to the defense. Two other players, sophomore Korede Olagbegi and freshman Geoffrey Young also compete for spots in the defensive scheme.

As the last line of defense, the keeper position is essential to the College’s playoff aspirations. Three players will compete for the spot: Junior Mac Phillips was the starter in his rookie season, but freshmen Logan Jones and Sam Onyeador both have a shot at the role after they redshirted in 2014.

After finishing in ties in scrimmages against Old Dominion and George Mason this August, it isn’t clear how far the team can go this season, but its goal is to make it all the way back to the Division I playoffs late in the fall.

Overall, the Tribe’s mix of new and old is hard to predict, especially given the difficult schedule ahead of the team. After finishing in ties in scrimmages against Old Dominion and George Mason this August, it isn’t clear how far the team can go this season, but its goal is to make it all the way back to the Division I playoffs late in the fall.

The Tribe opened its campaign this weekend at No. 18 Louisville, where it fell 2-1 in full time.

The Cardinals (1-0) opened the scoring in the 22nd minute with an assisted chip over Phillips, who played the complete game in the College’s net.

Tying the game at one goal apiece, Bustamante, starting at forward, scored his first goal at just over 40 minutes into the first half. Bustamante fired the ball unassisted from a free kick off the left and slipped it just inside the far post.

However, the tied game didn’t last long, as Louisville outmaneuvered the College two minutes later with a 16-yard shot to the upper left corner, giving the Cardinals a 2-1 advantage entering halftime. The Tribe was outshot 5-3 in the first half, and Phillips made a lone save.

After the break, the College tried to tie up the match several times. Speed fired a shot in the 59th minute, but it hit the post and bounced away from the Tribe forwards. Jackson Eskay made two quick shots at 80:33 and 81:23; the first was blocked and the second was saved by the Cardinals keeper. The Tribe was unable to capitalize on late yellow cards on Louisville in the 74th and 88th minutes with continued missed shots. Time expired and the College fell to 0-1 on the young season unable to pull the upset. Both teams took three shots in the second period, and Phillips collected a second save.

Up next for the College is the home opener Tuesday against Liberty (1-0). The game is scheduled for 7 p.m. at Martin Family Stadium