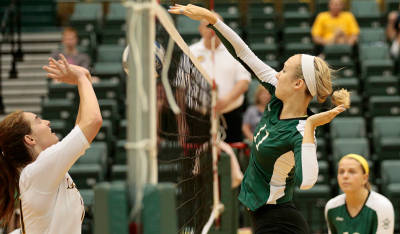 With classes starting up for the fall semester, William and Mary put on a clinic of its own over the weekend, going 2-1 and winning eight of its 12 sets played en route to taking the season-opening Tribe Invitational at Kaplan Arena.

After a difficult 2014 season that saw the Tribe finish 7-24 overall and 3-13 in the Colonial Athletic Association, there was a sense of tension during the first match of the season against Gardner-Webb Friday night.

After a difficult 2014 season that saw the Tribe finish 7-24 overall and 3-13 in the Colonial Athletic Association, there was a sense of tension during the first match of the season against Gardner-Webb Friday night.

“We were really nervous,” head coach Melissa Aldrich Shelton said. “We didn’t have the best year last year so everyone was a little nervous. And it’s hard to open at home because your friends are here and your family’s here. We were definitely tentative in the first set.”

The nerves were definitely apparent in the opening set, as Gardner-Webb (2-1) got out to a quick 10-4 lead and eventually took the first set comfortably 25-17. However, the College responded emphatically in the next set, jumping on the Bulldogs early and taking the set 25-14. The third frame proved the most even of the match, with both teams exchanging points throughout. The College eventually won out with a kill by senior Mallory Brickerd on an assist from junior Gabrielle Pe, one of her 19 total for the match.

Shelton noted that there was a change in mindset after the difficult opening set.

“The difference was our serving and how aggressive we were,” she said. “We need to be aggressive. They served tough, they had more aces than us. Every server went back and served for it and we don’t do that yet mentally. We’re getting there, we’re moving forward, but it’s something you have to learn how to do.”

That room for growth was on display during the next two sets, as the Tribe squandered an early lead in the fourth set and dug itself into a hole it couldn’t get out of in the fifth, losing 25-21 and 15-7, respectively. Gardner-Webb took the match 3-2.

The next morning’s matchup against La Salle (2-1) would yield a more positive result, as the Tribe won in consecutive, albeit close, sets. The first set would set the tone of a back and forth affair, with the Tribe prevailing 25-22, as neither team was able to string together a run of more than a few consecutive points for the entirety of the set.

The second set saw the College nearly have victory snatched from them only to take it back. After going up 24-23, a kill by La Salle’s Ashley Felton and an attack error by senior Carolyn Albright put the Tribe in danger and only a point away from having the match evened at one set apiece.

A clutch kill by sophomore Sydney Biniak tied the game at 25. Shelton then substituted in Pe and sophomore Paige Humphrey for an immediate impact. Humphrey had a kill directly after the substitution and Pe would set up Biniak for a kill that put the Tribe one point away from victory. An attack error from La Salle cinched the set, putting the College up 2-0.

After the first match, Shelton remarked that she wanted to play a lineup with more experience in order to handle the nerves, but it was the youngsters who carried the second match, with freshman Katie Kemp racking up 14 assists to follow her 21 in the opening match and Zumbach managing a team high 16 digs.

The Tribe nearly blew a late lead again in the third, surrendering three straight points after going up 24-20. Biniak would again prove invaluable, smashing home a set from tournament MVP sophomore Sara Zumbach and sealing the win with a 3-0 shutout.

After the first match, Shelton remarked that she wanted to play a lineup with more experience in order to handle the nerves, but it was the youngsters who carried the second match, with freshman Katie Kemp racking up 14 assists to follow her 21 in the opening match and Zumbach managing a team high 16 digs.

In the final match, the Tribe jumped on Norfolk State (0-3) early, cruising to an easy 25-9 victory in the opening set. The next three sets would see the two teams trade off scores of 25-23, with the Spartans taking the second set by that mark and the Tribe taking the next two. Senior Dessi Koleva was an all-around star for the Tribe, notching 14 kills with three service aces and 20 digs to lead the Tribe to victory.

The win also gave the Tribe a tournament triumph, as they would finish ahead of each of its three opponents with a 2-1 record. In addition to Zumbach earning tournament MVP, both Koleva and Albright made the all-tournament team.

The Tribe travels to Richmond this Tuesday for a match against Virginia Commonwealth, scheduled to start at 7 p.m.