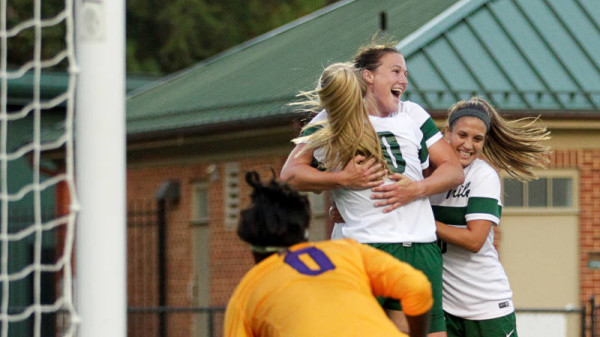 In the dusty, voluminous book of sports analysts’ clichés, the chapter for the phrase “being on the same page” is well worn and well-known. Every score or good play known to mankind can be attributed to an athlete on the same page of something with someone else, whether it’s the player next to the athlete, the caddy or the waterboy. And if an athlete makes that crucial play, then said athlete has to be on the same page as their coach.

Unless, of course, that athlete is sophomore back Elysse Branton and that game-breaking play is the crucial goal in the 3-0 triumph by William and Mary (3-1) over East Carolina University (1-2-1) last Friday for the home opener at Martin Family Stadium. After 27 minutes of both teams trading ball control, Branton took possession on the Tribe side of the midfield line before slicing through the Pirates’ defense and firing from the top of the keeper’s box for the College’s opening goal.

Head coach John Daly knew that type of opportunity might present itself.

“We talked about the fact that the defense sat deep, I hope [Elysse] was thinking as she went forward” Daly said. “I had said before the game, ‘If you get to the thirty or twenty-yard mark, you can go a bit further.’ I hope she did because she remembered my scouting report. I wouldn’t count on it though.”

Branton saw the opportunity a little differently than Daly.

“I was dribbling down the field, and space opened up” Branton said. “[Senior forward] Sam Cordum went on a great run that took two or three defenders with her; it was wide open.”

Branton’s goal broke open the game after a lengthy stalemate, though each team had a serious opportunity at the 30-minute mark. Daly attributed some of the offensive struggle to Cordum’s continued issues with a knee injury.

“If Sam was close to 100 percent, she would’ve gotten us some goals,” Daly said. “We’ve got goals from sources that we didn’t get last year … and we’re getting different players in there.”

Two of those new sources stepped up Friday.

After Branton’s initial strike, the Tribe began to gain momentum against the outmatched Pirates, dominating possession time while surrendering few opportunities. Two minutes after the first goal, senior back Meghan Musgrove launched a Carli Lloyd-esque pass from midfield, laying the high ball right inside the six-yard box while the College attack crashed onto the pass. Senior forward Katie Johnson found the ball in the melee, and fired in the second goal.

Right before halftime, the Tribe had the ball in the far corner against the baseline. Junior midfielder Haley Kavanaugh navigated around her defender and slipped the ball to senior midfielder Barbara Platenberg, who sprinted towards the net and scored the College’s third goal of the contest.

After the first half, the action grinded to a halt.

Cordum briefly went down in the 69th minute, but was able to walk off the field.  Keeping up defense but unable to produce any more goals, the Tribe took its third consecutive victory with a 3-0 margin in full time.

The celebration from winning the home opener was short-lived as No. 21 Duke (3-0-1) cruised to a 2-0 victory over the College last night in Durham, N.C.

The Blue Devils outshot the Tribe 10-0 in the first half. Needless to say, senior keeper Caroline Casey was kept rather busy, racking up a career-high seven saves. In all, Casey faced a deluge of 27 total shots and 11 corner kicks. Casey now is just six saves away from the fifth-most saves in school history.

Clearly overmatched, the College managed a meager four shots, all in the second half. The defense held the Blue Devils scoreless in the first half before surrendering a goal in the 52nd minute, a rebound off of a penalty kick awarded for a Tribe handball. In the 56th minute, the game began to slip out of reach with another Duke goal.

Kavanaugh had an opportunity in the 72nd minute, but couldn’t capitalize on the chance, and the game finished 2-0 in favor of the Blue Devils.